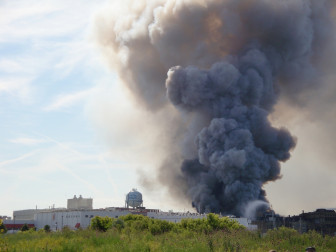 A July 2009 fire at the Patrick Cudahy meatpacking plant blazed for days, forcing the evacuation of hundreds of people and causing more than $200 million in damage. While many aspects of the response went well, significant problems also occurred, including failures to meet federal emergency response requirements. Photo courtesy of Kimberly Prellwitz

State and local agencies write these “lessons learned” reports after training exercises (such as terrorism scenarios) and actual disasters to help emergency responders improve their response and planning in the future. They outline what happened, major strengths and weaknesses. Among other problems, the reports below contain accounts of overlapping jurisdictions, poor communication, deviation from command structures, insufficient equipment or responses.

These reports aren’t compiled in any publicly available central place, so the Wisconsin Center for Investigative Journalism requested them from counties across Wisconsin. As a result, this should not be considered a complete set. The reports range from 2005-2011 and were written by a variety of agencies.

Green icons are training exercises; red ones are events. Locations are approximate; some points mark events that took place across large areas. Click any icon to learn more and get a link to the full report.
Reporting: Sarah Karon and Jason Smathers; map: Kate Golden/WCIJ.

Search for communities or keywords in the Center’s DocumentCloud archive.