Project: Failure at the Faucet 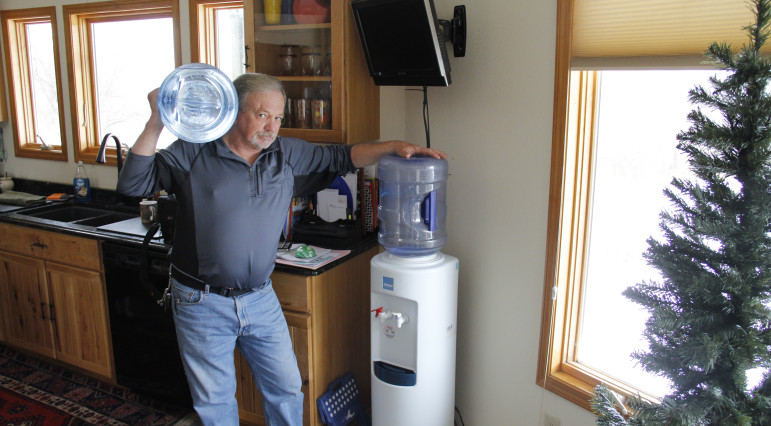 Frank Michna buys bottled water for drinking and cooking in his Caledonia home because of high levels of molybdenum and boron in his well.

Nearly half the private wells in Wisconsin have tested as unsafe.

In Wisconsin, a state whose very name evokes lakes, rivers and abundant water, hundreds of thousands of people may consume drinking water tainted with at least one contaminant.

Climate change is bringing heavier rains, making it tougher to keep untreated sewage and stormwater out of the Great Lakes.

The latest findings from a study of drinking water wells and their surroundings finds manure from cows that is stored or spread on farm fields poses the highest risk for certain contaminants.

The Society of Professional Journalists names ‘Failure at the Faucet’ the top investigative story among small independent news sites for 2016.

Funding for childhood lead poisoning prevention is down in Wisconsin, and proposals to better protect children from lead in drinking water have stalled in the Legislature.

Milwaukee takes action to reduce lead in water; critics say it is not enough

The city of Milwaukee, with more than 70,000 lead service lines, has taken several steps in the past year to lower residents’ exposure to lead in drinking water, but activists say the city has not done enough.

Eighteen communities in Wisconsin, including Milwaukee, plan to replace lead lines leading to schools and day care centers. View the areas of the state where the work is planned.

Nine months after the U.S. Environmental Protection Agency warned against flushing water systems before testing for lead, the state Department of Natural Resources has not yet passed that advice on to public water systems in Wisconsin.

A 2007 survey of private drinking water wells found 1 out of 3 had pesticides or their breakdown chemicals; farm groups oppose push for tougher atrazine rules.

Overview — Hundreds of thousands of Wisconsin’s 5.8 million residents are at risk of consuming drinking water tainted with substances including lead, nitrate, disease-causing bacteria and viruses, naturally occurring heavy metals and other contaminants.

Nitrate — Fertilizer and manure, and the rise of corn and soy, help pollute private water wells across Wisconsin. Costs land on water consumers.

Arsenic — The threats of this naturally occurring, ancient poison are made worse by manmade activities.

Badger Army Ammunition — The U.S. Army has left a legacy of toxic waste in scenic communities south of Baraboo. Now, hundreds of local residents may soon have access to safe drinking water from their home taps.

Lead — The federal Lead and Copper Rule fails to ensure Wisconsin’s drinking water is safe. Lead in drinking water, which has ignited a public health crisis in Flint, Michigan, is largely ignored as a potential contributor to elevated blood lead levels in thousands of Wisconsin children.

Radium — Dozens of communities struggle with aquifers contaminated by this radioactive element, a contaminant that occurs naturally in bedrock. The city of Waukesha has made a bid to tap water from Lake Michigan because of increased radium in its wells.

Strontium — Wisconsin has among the highest level in the U.S. of this unregulated element in its drinking water supplies. The EPA is studying whether to regulate this naturally occurring heavy metal in drinking water.

Pathogens — Disease-carrying viruses and bacteria are present in some drinking water. To save money, some communities use a new loophole to avoid sanitizing their municipal water, putting tens of thousands of their residents at risk.

Pesticides — Present in one-third of private wells tested in one study. Acute pollution has prompted atrazine prohibition zones, including much of Dane County.

About Failure at the Faucet

Reporters reviewed dozens of studies, interviewed many of the state’s foremost water quality scientists and scoured the state to find homeowners who cannot do something most of us take for granted — cup their hand under the kitchen tap and take a long, cool drink of water. Produced for The Confluence, a collaborative project involving the Center and students and faculty of the University of Wisconsin-Madison School of Journalism and Mass Communication.
Read more 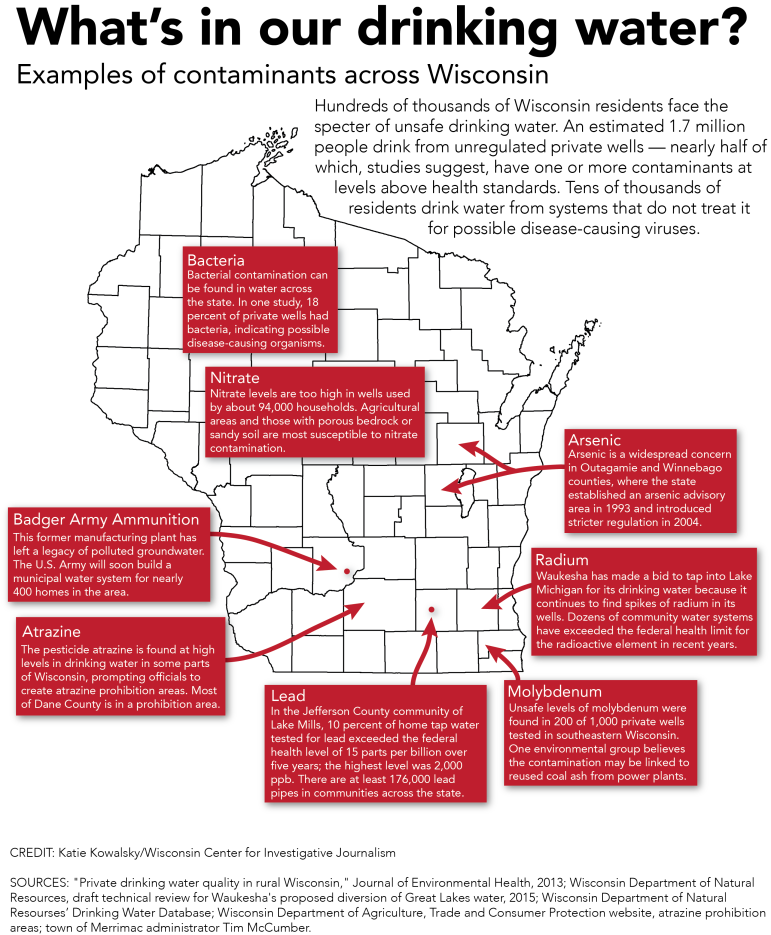 This reporting is part of Water Watch Wisconsin, examining water quality and quantity issues statewide. Failure at the Faucet was supported by a grant managed by the Online News Association and funded by the Excellence and Ethics in Journalism Foundation, the Robert R. McCormick Foundation, the Knight Foundation, the Democracy Fund and the Rita Allen Foundation.