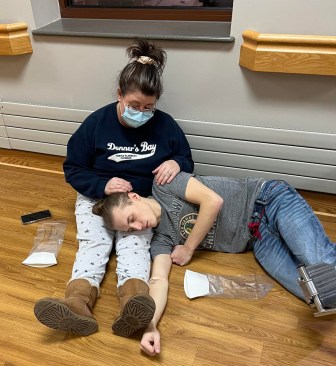 Of note: This week we highlight the Journal Times’ coverage of Wisconsin’s overflowing hospitals as the omicron variant of the coronavirus spreads rapidly across the state and country, affecting patients of all types. “America’s health care system is so strained by COVID-19 that it simply cannot care for all of the people who are sick right now — whether with coronavirus or with a severe viral infection, heart attack, stroke, car crash or other malady,” Adam Rogan reports. Nearly 95% of Wisconsin’s ICU beds were in use as of Tuesday, and more than 78% had ICUs at peak capacity, according to the Department of Health Services. About 10,200 Wisconsinites have died from COVID-19, according to the agency’s official tally.

Collin Coshun lies in the lap of his mother, Kristine, on the floor of the waiting room outside the emergency room at Froedtert Pleasant Prairie Hospital (formerly St. Catherine’s) during his nearly 17-hour wait for treatment between Dec. 27 and 28. In front of him and next to his mother are cups attached to bags to vomit in, as he did repeatedly throughout the days. Courtesy of the Coshun family

Kristine Coshun’s son Collin was on the floor, screaming, crying and vomiting repeatedly. There was nothing she could do. Kristine and her husband took the 22-year-old from one Kenosha County hospital to another. But there weren’t any nurses or doctors available to take care of him. They ended up waiting more than 16 hours in the waiting room of Froedtert Pleasant Prairie Hospital. They never did see a doctor. A receptionist took vital signs of the others waiting to be admitted. Patients were being treated in hallways. During the 17th hour, Collin was admitted to a makeshift room. An IV was put in his arm. He was sent home 2 hours later. They still don’t know what’s wrong with him.

Related from The New York Times: Omicron: What we know about the new coronavirus variant

The Jan. 6 assault on the U.S. Capitol continues to divide us. Here’s how Wisconsin’s federal lawmakers viewed it then, and see it now

A year later, the shocking events that took place on Jan. 6, 2021 — an assault on the U.S. Capitol and an effort to overturn the presidential election — continue to divide the Republican Party, Congress and the American public. All 10 of Wisconsin’s federal lawmakers condemned the assault when it happened, but with varying degrees of vehemence and outrage. Two of the 10 (House Republicans Tom Tiffany and Scott Fitzgerald) later sought to overturn the election outcome in Arizona and Pennsylvania and said they would have voted to overturn Wisconsin’s results if the question had come to the floor. The divide in Congress between how Democrats and Republicans have responded to — and publicly remembered — these events has since grown.

Related from WPR: 6 Wisconsinites have been charged in US Capitol insurrection, but only 1 has gotten jail time

‘An American Tradition’: Lessons from a year covering conspiracy theories

It has become common to hear that we are living in an age of conspiracy theories, a symptom of our “post-truth” society. And yet researchers who track such suspicions with polling say there is no evidence that more people in America believe in conspiracy theories today than in previous eras. That is in part because they have always been quite common among the American public and throughout U.S. history. Virtually everyone believes in a conspiracy theory or two, experts say, and most of the time it causes no problems at all. To understand the lure of conspiracy theories and alternate realities, you have to interrogate what people get out of believing such things.

During a foraging stop along the shoreline of an ice-covered Lake Wingra, a pair of sandhill cranes squawk skyward in 2019. John Hart / Wisconsin State Journal Archives

The GOP leader of the state Senate said he does not support a major overhaul of the Wisconsin Elections Commission despite a push from some rank-and-file Republicans to dismantle the agency. Senate Majority Leader Devin LeMahieu, R-Oostburg, also voiced support for Sen. Kathy Bernier, R-Chippewa Falls, the outspoken chair of the Senate’s election committee who has called for a swift end to an Assembly Republican investigation into the 2020 presidential election. Republicans created the Wisconsin Elections Commission in 2015 after they dismantled the Government Accountability Board, or GAB, that preceded it. The GAB came under fire from Republicans for its investigation into former GOP Gov. Scott Walker’s campaign.