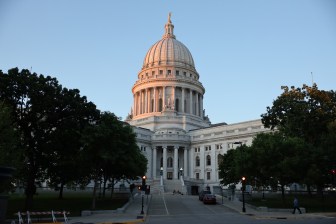 Of note: This week we highlight a story by Milwaukee Journal Sentinel reporter Patrick Marley pointing out the lack of action on a complaint filed one year ago with the Wisconsin Elections Commission. The complaint involves an effort by Republican electors to cast Wisconsin’s 10 electoral votes for then-President Donald Trump, although Democrat Joe Biden won Wisconsin. As in Wisconsin, Republicans in six other states that Trump lost filed paperwork trying to falsely claim Electoral College votes. The paperwork they filed is nearly identical in many cases, according to copies posted online last year by the liberal group American Oversight.

The Wisconsin Elections Commission has yet to act on a complaint it received nearly a year ago that alleges Republicans committed fraud by submitting paperwork to federal officials that falsely claimed Donald Trump won the state in 2020. Among those filing documents that tried to give Wisconsin’s electoral votes to Trump was Bob Spindell, a longtime Republican activist who sits on the commission that is supposed to consider the complaint. Spindell has alleged the other commissioners are trying to force him off the case.

A FOX6 Investigation reveals a communication breakdown may have led to the release of Darrell Brooks from jail five days before the Waukesha Christmas parade. This episode of the Open Record podcast reveals that a delay in posting a bail payment online may have led to the parade suspect’s release — and how a simple phone call could have prevented it.

Rodney and Cathy Jensen are fighting sale of their Mount Pleasant, Wis., property to make way for Foxconn. They have filed lawsuits against the village claiming, among other things, the offer was lower than what some other property owners received. They are seen here at a hearing at Racine County Circuit Court on July 10, 2019. Ricardo Torres / The Journal Times

The village of Mount Pleasant has settled the last eminent domain lawsuit filed in 2018 by homeowners whose land was taken by the municipality to make room for the Foxconn development. Rodney and Catherine Jensen have agreed to relocate from their home four years after the village acquired the roughly 3 acres of property.  But the Jensens have refused to move, instead filing five federal lawsuits. Wisconsin law gives municipalities the power to acquire private property using eminent domain as long as there is fair compensation and the property will be used for a public purpose. The Jensens were among dozens of homeowners whose land was obtained to make way for Foxconn, which announced in July 2017 plans for a massive flat-screen manufacturing plant that included a 20-million-square-foot complex and promised 13,000 jobs for the state. Those plans never materialized.

Earlier coverage from WPR and Wisconsin Watch: Owners near Foxconn say they were misled; now their homes are gone

Local health departments are receiving complaints about a private COVID-19 testing facility on Eisenhower Drive in Buchanan that’s part of a company drawing criticism nationwide for unsafe conditions and undependable tests. Since-deleted social media posts Monday showed the COVID-19 testing site, located at N162 Eisenhower Drive, was crammed full of people with lines going out of the building. The posts prompted the City of Appleton to tweet that the center isn’t run by the city’s health department, but by a company called the Center for COVID Control, adding, “Please BEWARE.”

A voter deposits an absentee ballot into a drop box on Williamson Street in Madison, Wis. on Oct. 17, 2020. Jim Malewitz / Wisconsin Watch

A Wisconsin judge on Thursday sided with conservatives, ruling that absentee ballot drop boxes cannot be located anywhere other than at offices of local clerks and that no one other than the voter may return such a ballot. The ruling, which will almost certainly be appealed all the way to the Wisconsin Supreme Court, hurts Democrats who had pushed for expanded absentee ballot use during the pandemic in 2020 when President Joe Biden defeated Donald Trump by fewer than 21,000 votes. It comes 10 months before Democratic Gov. Tony Evers and Republican U.S. Sen. Ron Johnson are up for reelection in key races targeted by both parties. Supporters of ballot boxes will seek a stay of the ruling, said attorney Jeff Mandell, who is with the group Law Forward that represented Disability Rights Wisconsin and other groups in the case. He said the case ignores the law to achieve a political advantage.