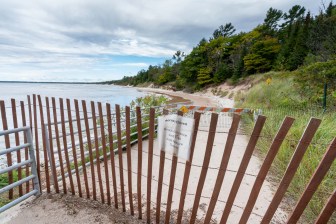 Lake Michigan’s winds and waves have sculpted the landscape of Whitefish Dunes State Park, a must-see treasure along Wisconsin’s Door Peninsula. Water delivers fine sand to a shoreline that supports threatened plants like the dune thistle. Wind stacks that sand into the mighty dunes that inspired the park’s name.

Summer visitors splash on its beach or hike to Old Baldy, the park’s tallest dune that rises nearly 100 feet above the lake. Come winter, gazers marvel at erupting ice volcanoes — cone-shaped mounds formed when waves shoot slush and water through cracks in ice. These shores have attracted humans for thousands of years; evidence lies in the Native American pottery, bone tools and thousands of other artifacts that Lake Michigan’s forces are increasingly unearthing from the dunes.

But those same winds and waters are also whittling away the park’s landmarks — eroding dunes, toppling trees, damaging amenities and, at times, swallowing the beach whole.

In 2018, those elements undermined a walkway leading to the park’s beach. The ramp remains closed three years later, preventing people with disabilities from accessing the beach. And record-high waters in 2020 left only a narrow stretch of beach at Whitefish Dunes for people to sunbathe. That threw a wrench into social distancing protocols during a coronavirus pandemic that drove people outdoors.

Visitors have flocked to Whitefish Dunes and other Wisconsin state parks in record numbers during the pandemic, seeking fun and relaxation while public health measures limited indoor options. But Lake Michigan’s volatile waters have imposed their own limits along the shoreline. While beaches have somewhat recovered as water recedes from 2020 levels, the state Department of Natural Resources —which oversees a state system of 49 parks, 15 forests and 44 trails — has yet to repair many amenities destroyed in the surge.

North of the Door Peninsula, water swamped the dock at Rock Island State Park, closing the island to campers for most of 2020 and reducing admission revenue that funds the park system. At Point Beach State Forest, about 60 miles south of Whitefish Dunes, a winter storm hammered the beach three years ago and mangled the ramp leading to the beach. Its metal carcass lies twisted on the beach. No one knows when it will be fixed.

Just as local homeowners have watched waves flood and erode their lakefront, Wisconsin may see more damage to its shoreline parks. Scientists expect erosion to worsen as climate change brings more volatility to Great Lakes water levels. That would only lengthen a backlog of thousands of needed repairs that one DNR official pegs at nearly $1 billion. But the agency’s funding remains scarce, and even greenlighted repairs can take years to complete.

The DNR is looking for grants and external funding sources for repairs, but it can only prioritize the most serious damage unless lawmakers invest more in a park system that currently ranks among the country’s worst-funded. State parks have largely relied on revenue from admissions and campsite reservations since 2015, when then-Gov. Scott Walker eliminated general-purpose spending on park operations.

“We need to increase funding for state parks and we also need to look for additional ways to support homeowners and municipalities along the shoreline,” said state Rep. Deb. Andraca, D-Whitefish Bay, who has proposed legislation to finance shoreline protection projects.

A dilemma for dune protection

The powerful waves that have gobbled up the beach at Whitefish Dunes have sent nearby homeowners scrambling to build walls to protect their beaches.

Just south of the park, Bo Ellis in 2020 stacked rocks along his shorefront to deflect the waves amid worries that his home would topple into the lake. Nearly all of his neighbors now have riprap — slopes of rock or concrete that absorb force from waves — or some other kind of barrier, most of them constructed last year, he said.

The trend extends along the Door Peninsula, where the DNR is seeing a surge in applications to construct such barriers along the shoreline. That includes a more than 830% increase from 2018 to 2020 in “emergency self-certifications” to protect structures facing imminent danger from accelerating erosion; residents filed 280 applications last year, up from fewer than 30 in 2018.

On the left, Whitefish Dunes State Park in Door County, Wis., is seen on Aug. 25, 2012, during a period of low water, in a video uploaded by YouTube user MyGBLife. On the right, the park is is seen in May 2020, during a period of record high water which overtook most of the beach. (Door County Pulse archives)

Lake Michigan’s water levels have swung dramatically over the past decade. From record lows in 2013 to record highs in 2020, Lake Michigan swelled by more than 6 feet. Climate scientists attribute the volatility to a complex interplay of rising temperatures as humans emit more greenhouse gases and increased precipitation from more frequent and intense storms over the Great Lakes region.

While artificial barriers can protect the property immediately behind them, they can disrupt the natural movement of sand that replenishes beaches downstream. A seawall meant to save a beachhouse can cost another homeowner their beach, said Guy Meadows, a professor at Michigan Technological University and director of its Marine Engineering Laboratory.

DNR officials face additional complications when weighing how to protect state parks from flooding and erosion, including fundamental questions about land preservation.

At Whitefish Dunes, park manager Sarah Stepanik said her colleagues have discussed adding an offshore barrier to break up damaging water currents. But doing so would disrupt the forces that created the popular dunes.

“The unfortunate thing is, those currents are part of the mechanism that formed the dunes. So if you put (barriers) in place, you’re protecting them, but you’re stopping their formation,” she said.

Instead, the DNR is considering structures that can survive fluctuating lake levels, she said. That might include ditching a fixed dock for one that floats.

“We do want to figure out how to make it more usable even in years when the lake isn’t agreeing with us,” Stepanik said.

“Do we look at it as protecting the land, or simply understanding that this is a natural process that takes place — whether it be a high water level year or a low water level year?” he said.

Besides, Bergum added, even an “endless amount of money” may not be enough to solve the problem.

“It’s just too vast,” he said. “You would have to literally riprap the entire Lake Michigan shoreline to address erosion everywhere.”

A sign greets visitors walking toward Lake Michigan from the parking lot at Point Beach State Forest, just north of Two Rivers in Manitowoc County. “Where no two visits are ever the same,” it says. Ice, wind and water continue to sculpt the fragile landscape.

Like at Whitefish Dunes, high water swamped most of the beach in 2020, said park supervisor Erin Dembski-Rodriguez. As the swollen lake limited beach access, visitors often traipsed across dunes or trampled endangered plants.

But one sight has remained constant for three years: The storm-twisted ramp. A lonely section of wood and metal stands about 100 yards away as waves lap at its edges.

That leaves most of the beach inaccessible to people with mobility issues “until the water recedes or we can come up with another solution,” Dembski-Rodriguez said.

Visitors occasionally complain about the damage, calling it in eyesore and lamenting the DNR’s delayed repairs. Dembski-Rodriguez submitted a repair request soon after the winter storm walloped it three years ago, she said, but the agency’s bureaucracy moves slowly.

Projects must compete with thousands of other repairs and improvements across the park system — often getting bumped to a future budget cycle to make room for higher priority projects.

“Money is always an issue,” Dembski-Rodriguez said. “But in this case it’s not the only issue.”

The DNR must also consider the timing of repairs, waiting for water levels to drop before embarking on shoreline projects, said Missy VanLanduyt, a DNR capital development coordinator.

“Part of what we need to understand is the pattern of the water. We don’t want to go in and repair something just to have it ripped out or damaged again,” she said.

Park supervisor Erin Dembski-Rodriguez is seen at Point Beach State Forest in Manitowoc County, Wis., on Sept. 23, 2021. Erosion at the park undermined a boardwalk, pictured here, and a winter storm three years ago also wiped out a nearby ramp. The structures are waiting to be fixed due to a slow pace of repairs at the Wisconsin Department of Natural Resources. Mario Koran / Wisconsin Watch

Bergum estimated close to $1 billion in repair and improvement needs have stacked up.

In her 11 years at the agency, VanLanduyt has never seen the DNR fund all needed repairs within a single budget cycle. The DNR leans on external funding — welcoming the millions raised by groups of private citizens who support the parks and exploring state and federal grants.

But grants often have specific terms that many of the highest-priority projects don’t meet, VanLanduyt added.

Most states invest more in their parks

Wisconsin in 2017 ranked 49th in the country, ahead of only Alabama, when it came to per-resident spending on operations for parks and recreation, according to a recent report from the Wisconsin Policy Forum.

Andraca, the state lawmaker, called lakeshore erosion and high-water damage a key issue for many of her constituents. Aside from calling for more state parks funding, she has proposed a bill to create a loan program that would help homeowners and municipalities pay for projects to protect shoreline properties from storm damage.

Democratic Gov. Tony Evers included that program in his last budget proposal, but Republican lawmakers on the powerful Joint Finance Committee stripped it from the budget Evers ultimately signed, along with many other items the governor proposed.

“Climate change is an issue that’s not going away anytime soon,” Andraca said. “I think it’s in the best interest of the state to be aggressive about finding cost-effective ways to deal with shoreline erosion and damage from high water.”

This story was produced as part of the NEW (Northeast Wisconsin) News Lab and in partnership with the Door County Pulse. The nonprofit Wisconsin Watch (wisconsinwatch.org) collaborates with Wisconsin Public Radio, PBS Wisconsin, other news media and the University of Wisconsin-Madison School of Journalism and Mass Communication. All works created, published, posted or disseminated by Wisconsin Watch do not necessarily reflect the views or opinions of UW-Madison or any of its affiliates.