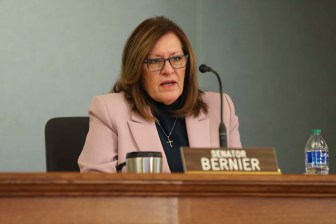 The Republican chair of the Wisconsin Senate elections committee on Monday urged members of her own party to halt their attempts to discredit the bipartisan elections system they created and to oust the state’s top official.

“We have a great system here, and no one should falsely accuse election officials of cheating,” Sen. Kathleen Bernier, R-Chippewa Falls, said at a state Capitol event organized by Washington, D.C.-based Center for Election Innovation & Research (CEIR), a nonprofit that works with Republican and Democratic elections officials nationwide. “The misinformation and disinformation that has been perpetuated is very frustrating to me.”

Bernier, who oversaw elections for 12 years as the Chippewa County clerk, accused some Republicans of spreading falsehoods about Trump’s 2020 election loss to “jazz up” their political base. And she called on former Wisconsin Supreme Court Justice Michael Gableman to finish his partisan review of the election soon — to limit the damage to the Republican Party and Wisconsin’s democracy.

“I am a Republican. I vote conservative. I want Republicans to win and for our good policies to continue forward. This is a charade — what’s going on with this constant drumbeat of all the massive voter fraud,” she said. “There’s a simple explanation for almost everything that people accuse election officials of doing.”

CEIR focused Monday’s event on efforts by Trump supporters to contest the audited and verified results of Trump’s 2020 loss, investigate the state and local election systems and shift more power over elections to Republican-controlled legislatures.

In Wisconsin, that includes Gableman’s taxpayer-funded probe ordered by Republican Assembly Speaker Robin Vos and GOP calls for the resignation of Wisconsin Elections Commission Administrator Meagan Wolfe and other members of the bipartisan commission that Republicans created five years ago under then-Gov. Scott Walker.

“I’m as scared and concerned as I’ve ever been in my entire career about the state of American democracy,” said CEIR founder David Becker, adding Bernier showed “political courage” in “standing up for American democracy” at a time when election officials face harassment and threats nationwide.

David Becker, executive director and founder of the Center for Election Innovation & Research, is seen during a media briefing on growing threats to election professionals in Wisconsin, held at the Wisconsin State Capitol on Dec. 13, 2021. “I’m as scared and concerned as I’ve ever been in my entire career about the state of American democracy,” he said. Also speaking at the session were Bob Bauer and Ben Ginsberg, co-chairs of the Election Official Legal Defense Network; state Sen. Kathleen Bernier, R-Chippewa Falls, the Legislature’s majority caucus vice chair; and Matthew Masterson, a fellow at the Stanford Internet Observatory, who appeared by video. Coburn Dukehart / Wisconsin Watch

An international democracy expert told Wisconsin Watch in an interview that she is struck by the brazenness of the attempts to undermine democracy in the state compared to what she sees abroad. Laura Thornton is director of the Alliance for Securing Democracy at the German Marshall Fund, an international organization that defends democratic elections from autocratic influencers.

“Normally the takeovers are a little bit slyer or more nuanced,” Thornton said, but Wisconsin Republicans are “saying the quiet parts out loud.”

She added: “It’s terrifying how the very basics of what we all took for granted are just crumbling.”

Wisconsin elections officials are not the only ones under pressure. A Benenson Strategy Group survey of 233 local election officials conducted in April found that 1 in 3 were concerned about feeling unsafe or being harassed because of their job, while 1 in 6 said they had been threatened.

“You’ve seen all three of these things happen in Wisconsin, directed at state officials and local officials and others,” he said.

Gableman in recent weeks has sought court permission to jail the mayors of Madison and Green Bay, whom he accused of refusing to answer questions about their cities’ elections during the probe Vos authorized under a $676,000 contract.

Separately, Racine County Sheriff Christopher Schmaling in November called for criminal charges against five of six members of the Elections Commission for telling local clerks to send absentee ballots to nursing homes rather than sending special deputies to oversee in-person voting due to the coronavirus pandemic. Schmaling, a Trump supporter, called that violation of state law.

Some Republicans have seized on that issue amid questions about whether staff at a Mount Pleasant, Wisconsin nursing home improperly influenced the voting of a few residents with cognitive problems. Vos called for Wolfe’s resignation in October in response to Schmaling’s nursing home voting probe.

Said Bernier: “That action that may or may not have occurred within the nursing home reflects on the individual who broke that law. Not the Wisconsin Election Commission and not Meagan Wolfe. They didn’t break the law.”

That came days after the Legislative Audit Bureau made 30 recommendations following a  review of how clerks complied with state laws during the 2020 presidential primary and general election. Among other recommendations, the bureau called for improved training for municipal clerks on identifying potential duplicate voter registration records and ballot processing — and to make sure that absentee ballot certificates comply with state law requiring witness signatures.

While the report offered no evidence to support Trump’s baseless claims of voter fraud, Vos and some other Republicans said its findings justified further investigation of the state election administration.

Becker is among those who have applauded state and local election officials’ efforts to navigate the pandemic amid unprecedented voter turnout in 2020.

In a Nov. 8 letter to Vos, a bipartisan group of more than 50 election officials praised Wolfe’s “competence and excellence” and encouraged Vos and his colleagues to “speak out against this line of harassment and speak truth to all Wisconsin voters.”

For American citizens watching the post-election scrum play out, there can be a feeling of “helplessness,” Thornton said.

“When I have seen progress on democracy (internationally), it does mostly come from everyday people banding together,” Thornton said.

She said the question for the electorate is: “Are we at the point where people care enough?”

The nonprofit Wisconsin Watch (www.WisconsinWatch.org) collaborates with WPR, PBS Wisconsin, other news media and the University of Wisconsin-Madison School of Journalism and Mass Communication. All works created, published, posted or disseminated by Wisconsin Watch do not necessarily reflect the views or opinions of UW-Madison or any of its affiliates.

‘This is a charade’: GOP senator, voting experts urge Wisconsin Republicans to halt election attacks is a post from WisconsinWatch.org, a non-profit investigative news site covering Wisconsin since 2009. Please consider making a contribution to support our journalism.