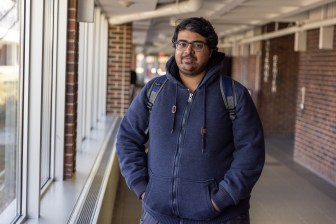 For more than a year, that’s how Aditya Sharma, a nursing student at North Hennepin Community College in Brooklyn Park, Minnesota, planned his meals.

Sharma, a 27-year-old native of Chandigarh, India, came to Minnesota in 2019 to study nursing. The nearest grocery store to the apartment he shared with his sister was too expensive. He sometimes rode his bike to Aldi, where groceries were more affordable, but it took him an hour and a half to get there. In winter, biking to the store wasn’t an option. He looked for 75-cent specials at Burger King and carefully rationed his pizza.

He calculated that at two slices per meal, a $10 pizza could last four meals. But he couldn’t afford many fresh fruits or vegetables.

Sharma wore light blue scrubs as he told his story on a recent Thursday afternoon, between classes at North Hennepin. As his diet deteriorated, he recalled, so did his health. He gained weight, his resting heart rate increased and his concentration dropped. His grades suffered.

Then a classmate told him about the campus food cupboard, available to all students. On his first visit, Sharma took rice, cereal and some ready-to-eat meals. This semester, he stops in for groceries once a week.

Forty-two percent of Minnesota community college students say they cannot afford to eat balanced meals, according to a 2019 survey by the Hope Center for College, Community, and Justice at Temple University. And 49% said they struggled with housing insecurity in the past year.

College counselors and administrators worry that insecurity around basic needs is fueling a decline in community college enrollment, a decade-long trend in Minnesota and across the country that has accelerated during the pandemic. In just the past two years, community college enrollment nationwide has plummeted by 15%, according to the National Student Clearinghouse Research Center.

Community colleges in four Midwestern metro areas — Minneapolis, Milwaukee, Detroit and Chicago — have rolled out a variety of strategies in recent years to boost enrollment by increasing access and affordability while providing unprecedented levels of support for students struggling with barriers including poverty, food insecurity, transportation — and now, a pandemic.

“We do see students having to make a choice between going to work, so they can make enough money for rent that month, or coming to class,” said Lindsay Fort, the dean of student development at North Hennepin Community College.

Your contribution is appreciated.

In Milwaukee, higher education is increasingly vital, particularly for its residents of color. A 2020 University of Wisconsin-Milwaukee report ranks it at or near the bottom of major cities when it comes to many key measures of Black community well-being, including rates of homeownership, poverty and employment. The fallout from the COVID-19 pandemic is only expected to deepen inequities.

MATC has in recent years launched a dizzying array of programs and initiatives to open the door to adult learners, including free tuition to qualifying students, debt forgiveness and dual-credit programs for high school students which it says have cut costs and accelerated a college education for more than 4,000 students. More than three-quarters of participants in the free tuition and debt forgiveness programs are students of color, MATC said.

There’s no shortage of success stories for MATC graduates. After dropping out of high school, Marisol Mendoza earned an associate’s paralegal degree from MATC. Based on her grades there, she was awarded scholarships to Marquette University, where she studied criminology and legal studies. Today, Mendoza’s work as a paralegal focuses on civil rights and labor law.

Tanya Fenninger said MATC helped her become a certified nursing assistant, a credential that got her a job right out of school. “I think MATC does a great job at getting you prepared for a professional career,” she said.

A nursing student works in a simulation lab at Milwaukee Area Technical College. Health care careers such as certified nursing assistant are among the top jobs of MATC graduates. Courtesy of MATC

Despite successes, former students and those who have worked with them say barriers persist for adult learners transitioning to college. Fewer MATC students complete their programs in a timely way than at peer institutions across the United States, according to the Integrated Postsecondary Education Data System. About 16% of MATC students finish their programs within 150% of normal completion time, compared to a median of 31% among peer institutions.

Nevertheless, MATC remains a lifeline for students, boosting economic opportunity for Milwaukee and its residents.

“I really am a true believer that education really lifts people out of poverty, improves their lives and improves the community that we all share,” MATC president Vicki Martin said. “And we’re determined to be part of that solution,”

Martin said MATC’s experience with online learning during the pandemic, while uneven, may become a roadmap for success.

“I think it (pandemic) has given us an opportunity to really look at everything a lot differently than we did before,” Martin said. “And I think we’re a lot stronger because we have more tools in our toolkit.”

Chasidey Willis, 22, graduated from Wayne County Community College District in 2019. She has since earned her bachelor’s degree and has begun working on her master’s. Willis says the support she got from staff and other students at the school helped her succeed. Photo provided by Chasidey Willis

In Detroit, just 15% of the city’s residents have a bachelor’s degree or higher, and economists have reported that, while salaries in the city are expected to increase, Detroit residents will earn an average of $42,300 less than their more-educated suburban counterparts over the next five years.

When Chasidey Willis graduated from Detroit’s Mumford High School in 2017, she was determined to graduate from college — and to do it on time.

Willis enrolled at Wayne County Community College District and completed 16 to 18 credits each semester as a student-athlete while working part-time in a work study program. Sleep was a rarity.

The then-teenager finished her associate’s degree within two years. She transferred to a four-year school, earned her bachelor’s degree in psychology, and is now completing her master’s degree in special education.

But Willis’ story is far from the norm: Less than 20% of Wayne County Community College District students complete an associate’s degree within two years. Boosting that rate is among many goals the district strives to achieve.

Willis said the support she received at WC3 was “totally different” than her four-year college of University of Massachusetts Lowell. Willis said she graduated on time from community college due to her own determination and with the support from teammates, coaches, advisers and WC3 staff. They challenged her to maintain a minimum 3.0 grade-point average and insisted that she attend study hall sessions.

The college offers an array of support services including a food pantry, vouchers for city transportation, a closet of donated clothing, emergency housing placement and mental health advisers for struggling students.

Curtis Ivery, chancellor of WC3, described the school’s approach as student-first. The chancellor said faculty and staff frequently speak to students about their educational journeys and social-emotional capacity.

Said Willis: “I honestly believe Wayne County was by far one of the best schools that I’ve been to.”

Realizing the American dream in Chicago

For many immigrant students like Lien Tang, who studies at the City Colleges of Chicago’s Truman College, additional hurdles have made the experience of going to college during a pandemic even more challenging. Many students have had to take on additional work hours to support their families, all while struggling with technology problems and speaking limited English.

“Immigrants often encounter new institutions they have to navigate, which generally presents challenges if they do not know where or how to access resources, especially if they are not English-dominant,” said Sophia Rodriguez, a former Chicago ESL teacher who currently teaches at the University of Maryland’s Teaching, Learning, Policy and Development Department. “Immigrants face multiple challenges, so their priority may be just trying to survive this pandemic.”

Harry S Truman College is one of the seven City Colleges of Chicago, which works to support immigrant students through life challenges and the lingering pandemic. The campus is seen on Dec. 9, 2021 in Chicago, Ill. Michelle Kanaar / Borderless Magazine

As the COVID-19 crisis and virtual classes have stretched on for 21 months now, community college students are finding ways to adjust and connect in the virtual environment.

At CCC, the proportion of credit-earning students who self-identify as born outside of the U.S. has declined from 17% to 13% over the last five years. But many continue to rely on the Adult Education Program, which includes non-credit English as a second language classes, high-school equivalency courses and citizenship preparation classes. According to CCC student trustee Imran Mohammad Fazal Hoque — a stateless refugee from Myanmar — about 90% of students in those programs are immigrants new to the country who lack English skills.

ESL classes at Truman are free and include a final transitional course to prepare students to begin taking credit classes. CCC also works with immigrant-serving institutions to provide resources and scholarships to immigrants like DACA recipients who may not have access to traditional financial aid.

CCC instructors and staff have stepped in to help ESL students, going so far as to call students to make sure that they were able to log into their classes, a CCC representative said. City Colleges also loan out laptops to students for 60 days at a time. And students can take advantage of the completely virtual, cross-campus tutoring system established during the pandemic.

Tang was among those struggling with online classes. She had trouble logging into her Zoom account, a problem her middle-school-aged son helped her solve. Tang also used a free loaner Chromebook from CCC.

During the pandemic, to make ends meet, she started working as a caretaker for an elderly woman in Evanston. And like some students, Tang has found virtual learning can sometimes be more easily integrated with family and work obligations.

“(With online classes), you can do something at home or you can take care of your children,” she said. “You can work.”

Hoque, seeing the struggles of students like Tang, organized the Phi Theta Kappa honor society to help immigrant students access online classes and understand how to use their email to communicate with their professors. The society also provides virtual drop-in mentoring services and hosts networking events and scholarship workshops.

“Initially, it was really hard because we didn’t know how things would work,” Hoque said. “But … our past previous normal is not normal anymore. This virtual is normal now.”

This story was compiled by Wisconsin Watch Managing Editor Dee J. Hall. It is part of a collaboration that includes the Institute for Nonprofit News, Borderless Magazine, BridgeDetroit, Sahan Journal and Wisconsin Watch. The project was made possible with support from INN’s Amplify News Project, whose funders include the Joyce Foundation in the Great Lakes region, and the Robert R. McCormick Foundation in Chicago.

Midwestern community colleges work to lure, and keep, students struggling with poverty and other barriers is a post from WisconsinWatch.org, a non-profit investigative news site covering Wisconsin since 2009. Please consider making a contribution to support our journalism.