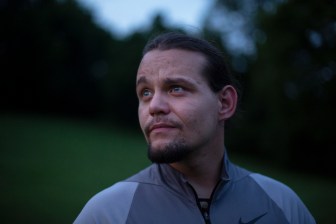 By the time I had the same conversation with the third or fourth attorney, I knew I’d stumbled on a big story. It was early spring, and I’d been doing some reporting for our forthcoming investigative podcast, Open and Shut, by asking attorneys from Northeast Wisconsin to reflect on their interactions with Outagamie County Circuit Court Judge Vincent Biskupic. What I kept hearing was that Judge Biskupic had a tendency to prolong court proceedings for months or years at a time, requiring people to return to court again and again for so-called “review hearings.” Was it legal? The answer was always the same: “I’m not sure.”

During his time on the bench, Outagamie County Circuit Judge Vincent Biskupic has pushed many defendants to pay their court-ordered financial obligations, often calling them back for so-called review hearings to receive updates on the status of their payments. While Biskupic’s attorney defends the practice, experts involved in the collection of court-ordered payments in Outagamie County and elsewhere told Wisconsin Watch and WPR the judge’s involvement in recouping payments is atypical. Biskupic is pictured in 2018 at the Outagamie County courthouse in Appleton, Wis. Danny Damiani / USA TODAY NETWORK-Wisconsin
Beau Jammes was charged with repeat offenses of resisting an officer and disorderly conduct. He filed a federal lawsuit against Outagamie County Circuit Judge Vincent Biskupic claiming a “de facto probation” placed on him through a stay was illegal and cost him lost wages, employment and housing, along with “mental stress” and “pain and suffering.” That suit was dismissed. Jammes poses for a portrait in Columbia, Tenn., on June 24, 2021. Michael Christen for Wisconsin Watch

Those initial interviews kicked off several months of reporting involving dozens of interviews, multiple record requests and three full-time reporters. We dug into statutes and case law, and we surfaced decades-old rulings unfamiliar even to some of Wisconsin’s top law professors. We spoke to former defendants who felt trapped by an ad-hoc treatment court, unclear of how to move forward to regain their freedom and their lives.

Our resulting series, Justice Deferred, revealed a previously unreported practice in Outagamie County of issuing “stays” to pause jail sentences in lieu of substance abuse treatment or other forms of self-improvement. Through extensive legal research and interviews with experts, our stories shone light into the murky legal area in which this practice operates. Through data analysis and a statewide survey, our stories proved how uncommon such actions are within Wisconsin. The personal reflections of people like Christopher Kartsounes and Beau Jammes showed how devastating prolonged engagement with the criminal justice system can be.

To report Justice Deferred, we enlisted the help of two full-time contract reporters and a fellow. We spent thousands of dollars on data and documents. It was an expensive, but important series. We could not do this kind of work without generous support from Wisconsin Watch readers, viewers and listeners.

If you believe in tireless reporting and fearless truth-telling, if you seek accountability for those in power — or if you just like podcasts — please support our work with a donation.

Your donation of $50, $100, $250 or whatever you are able to give will help us continue to produce the kind of investigative, public-service journalism you won’t find anywhere else.

Behind the scenes: reporting Justice Deferred is a post from WisconsinWatch.org, a non-profit investigative news site covering Wisconsin since 2009. Please consider making a contribution to support our journalism.