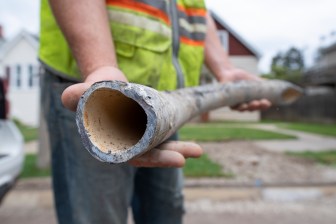 Of note: Milwaukee officials tell the Milwaukee Journal Sentinel that legislation before Congress could help the ramp up replacement of the estimated 70,000 lead pipes serving homes and businesses there. At the current rate of 1,000 replacements a year, the project could take 70 years and $750 million, Wisconsin Watch has reported. Another bonus: Milwaukee could reduce the $1,800 matching cost that property owners must pay to replace their portion of the pipes. “That would allow us to replace every single service line, and of course we would change the ordinance related to the cost-share,” Milwaukee Water Works Superintendent Karen Dettmer said. But, she added that replacing all the lines “is not looking like a possibility anytime soon.”

Funding to eliminate lead hazards, from paint to pipes, is in Biden’s Build Back Better bill. Here’s what that could mean for Milwaukee

After months of contentious negotiations, President Joe Biden is expected to sign his $1.2 trillion Infrastructure Investment and Jobs Act into law, following its passage through the House on Friday. That bill includes $15 billion for lead service line replacement projects, 49% of which could be in grants and/or forgivable loans distributed by states. Experts contend that much more is needed to support projects that will reduce lead contamination via pipes and paint. Such projects are funded more robustly in Biden’s Build Back Better bill, which is expected to face a tougher uphill battle in Congress.

The Wisconsin Elections Commission was told to adopt rules on ballot drop boxes, other issues. Partisan divisions may get in the way

Wisconsin election officials may not be able to adopt formal rules on ballot drop boxes and correcting absentee ballot paperwork because of partisan differences. Legislative auditors last month told the Wisconsin Elections Commission it needs to adopt rules that the Legislature can review on those issues. But the evenly divided commission may not be able to reach a deal on them. That political reality became clear during a legislative hearing Tuesday on the auditors’ review of how election officials performed their jobs last year during the COVID-19 pandemic. Republican lawmakers questioned the work of elections officials, with GOP Rep. John Macco of Ledgeview saying he found it “repugnant” that the Elections Commission hadn’t yet met to review an audit that came out more than two weeks ago.

This spring, he was auditioning to be the host of “Jeopardy!” Nearly every day, he pops up on television ads for national brands like State Farm insurance. And on Sundays this fall, he has led the Green Bay Packers to a division-best 7-2 record. Quarterback Aaron Rodgers is not just the NFL’s reigning most valuable player, he’s a celebrity who transcends the nation’s most popular sport, a household name on par with Tom Brady and Patrick Mahomes. So when news broke that he tested positive for the coronavirus last week and was unvaccinated, Rodgers justified his decision to not get vaccinated by speaking out against the highly effective vaccines and spewing a stream of misinformation and junk science. Medical professionals were disheartened not just because it will make it harder for them to persuade adults to get vaccinated, but because they are also starting to vaccinate 5- to 11-year-olds.

Critics of the way Wisconsin carried out its election for president last year amid a once-in-a-lifetime pandemic have pointed with suspicion to the practice of local election clerks filling out information for voters on absentee ballot certificates. A Wisconsin State Journal review of more than 6,500 such certificates, however, found little to raise suspicion, even if scores of voters made the kinds of small, predictable errors that tend to happen when thousands of people are asked to fill out a government form — many for the first time in their lives. The newspaper reviewed certificates from four city of Madison wards — two from the Far West Side, and one each from the Isthmus and Far East Side — that the city clerk’s office had previously scanned into electronic files.

Earlier from Wisconsin Watch: How Wisconsin voters can ‘cure’ the hundreds of ballots already rejected

A new study of hundreds of white-tailed deer infected with the coronavirus in Iowa has found that the animals probably are contracting the virus from humans, and then rapidly spreading it among one another. Up to 80% of deer sampled from April 2020 through January 2021 in the state were infected, the study indicated. Scientists were not able to identify how the deer might have contracted the virus from humans. There is no evidence that deer have passed th e virus back to humans. Researchers and outside experts characterized the study’s findings as a troubling development in the course of the pandemic. Widespread infection among North America’s most ubiquitous game species could make eradicating the pathogen even more difficult, especially if they became a reservoir for mutations that eventually spilled back over to humans.

Wisconsin Weekly: Infrastructure bill could speed up Milwaukee lead line replacement is a post from WisconsinWatch.org, a non-profit investigative news site covering Wisconsin since 2009. Please consider making a contribution to support our journalism.