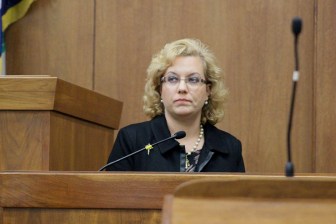 Of note: Today we highlight our collaboration with the Anchorage Daily News revealing a mass exodus of staff at an Alaska child-abuse clinic headed by Dr. Barbara Knox, who left the University of Wisconsin under scrutiny in 2019. The entire Alaska CARES medical staff left their jobs after alleged bullying and misdiagnoses by Knox, the Daily News’ Michelle Theriault Boots found. Brenda Wintrode of Wisconsin Watch discovered that the UW agreed to shield aspects of Knox’s controversial tenure in Wisconsin from future employers. A previous Wisconsin Watch story featured a Mount Horeb, Wisconsin, family that Knox incorrectly suspected of child abuse. Last week, a Dane County jury quickly acquitted a day care provider who the state criminally charged after Knox declared a child in her care was the victim of “obvious child abuse.”

Dr. Barbara Knox left the University of Wisconsin and American Family Children’s Hospital after colleagues complained of workplace bullying and parents accused her of misdiagnosing abuse. Now, complaints about her are surfacing in Alaska, where she is the state’s top child abuse pediatrician. Here, Knox is seen testifying on Sept. 14, 2017, at a murder trial in Huntington, W.Va. In that case, Aaron Brendon Miles and Mariya Ajena Jones were found guilty of second-degree murder of a 3-year-old. Courtney Hessler / The (Huntington, W.Va.) Herald-Dispatch

Two years after leaving the University of Wisconsin amid allegations of workplace bullying, Dr. Barbara Knox, UW’s former top child abuse pediatrician, is drawing similar scrutiny at her new job in Alaska. Seven current and former employees of Providence Alaska Medical Center say they made dozens of complaints about Knox’s management and medical judgment to supervisors, with no response for months. Knox now heads Alaska CARES, a statewide child abuse forensic clinic operated by Providence that, over the past two years, has lost its entire medical staff to resignations or eliminated positions, the Anchorage Daily News has learned.

Advocates working to improve the health of Black mothers and babies say that when it comes to their field, Wisconsin has for years been in a state of emergency. It’s a nationwide problem, but particularly acute in the Badger State, where Black people are five times more likely than their white counterparts to die during or within one year of pregnancy, and Black infants’ risk of death is double the state average. For Black women, the fear of becoming one of these well-known statistics weighs heavy. But at the state Capitol, they see little urgency to fix it.

‘I have lost my everything’: Afghans grapple with loss, hope as they prepare to leave Fort McCoy

Frough Tahiry, 23, hid in dark places along the streets of Kabul in the middle of the night Aug. 27 as her country fell to the Taliban. She was alone — something she said could get her killed if the Taliban found her. After a brief call with her parents, she stood quietly on a corner with no street lights until they came to walk her home. She said her parents “were scared to death” that something would happen to her. The next morning, Tahiry would leave her family to try for a third time to escape out of the Kabul airport with a group of 147 other students from the Asian University for Women. The young women could not bring their families. Tahiry is one of more than 11,000 Afghans at Fort McCoy military base in Wisconsin still waiting to be resettled into permanent homes across the U.S.

Four Wisconsin National Guardsmen went to Afghanistan together. All returned home safely. Within months, all took their own lives.

Suicides have been a long-standing problem in the military: Four times as many veterans of the Afghanistan and Iraq wars have died by suicide than in battle. But the suicide rate in the National Guard has been especially troubling, higher on average over the past five years than the rate among full-time and reserve military personnel. In 2020, 120 Guard members nationwide died from suicide, up from 90 the year before. A Milwaukee Journal Sentinel investigation found that as America increasingly leans on the Guard to fight overseas wars, provide security at protests and even drive public school buses, Guard leaders and lawmakers have failed to keep pace with the greater mental health burden facing the soldiers.

More than a year after a police officer shot his nephew seven times, paralyzing him from the waist down, Justin Blake takes to this city’s courthouse steps each morning and makes his case for justice. He wants Kyle Rittenhouse, the teen on trial for murder after he brought an AR-15 to Kenosha amid the unrest that followed Blake’s shooting, held to account. He wants the families of the three men Rittenhouse shot, two fatally, to know that their pain matters. But the thing he most wants will not come to be: There will be no trial for the police officer who shot Jacob Blake. “They took something from a young man that we can never replace. And he hasn’t had his day in court,” said Justin Blake. “I’m mad as hell.” So are many among Kenosha’s Black community, even though few have joined Justin Blake’s often lonely vigil.