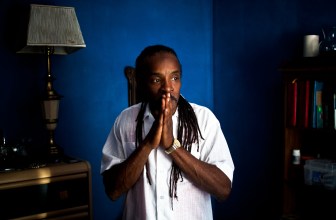 As a reporter, I’m often the one people call when nobody else will listen.

For the past decade, I’ve experienced a near-sacred privilege: to meet people in their most vulnerable moments, to have them trust me, a stranger, with intimate details of their lives. I began my career as a Wisconsin Watch intern before living on the west coast as a Guardian US correspondent. Now I’m back where I started — much more experienced, but just as eager to do this work.

Morgan acknowledges that his past actions have caused pain and deserve punishment but feels that being on GPS monitoring conveys that he is “unworthy of life.” He says he hopes and prays that he is“able to continue to withstand this.” Lukas Keapproth / Wisconsin Center for Investigative Journalism

My first project with Wisconsin Watch began with such a phone call. In 2012, I received a tip from someone who’d been convicted of a crime and was required to wear a GPS-tracking device around their ankle. The device seemed to malfunction, they said, errantly signaling to law enforcement they’d broken the rules of their release. The tip checked out.

After nine months of work, including combing through thousands of pages of public records, we found evidence to support the assertions of 13 people who said Wisconsin’s GPS tracking system repeatedly registered false alerts, sending them to jail although they had done nothing wrong — wasting taxpayer money and police resources, and disrupting their returns to family and work.

A decade later, critics are still airing legal and technical concerns of the GPS tracking program, even after our reporting spurred lawmakers to request a program audit. Fortunately, Wisconsin Watch plans to produce additional coverage in the months ahead.

The support editors provided while I reported that story, and the training they offered during the year I spent as an intern, made possible all of my work that followed. Since 2009, Wisconsin Watch has launched the careers of dozens of reporters like me — journalists who have filed stories from Russia to East Africa to Appleton, Wis.

After being convicted of bail jumping, Christopher Kartsounes was supervised by Outagamie County Circuit Judge Vincent Biskupic via multiple “review hearings.” After an outburst of frustration at one appearance, Biskupic sent Kartsounes to jail to serve the sentence he had tried to avoid. Had Kartsounes just served his time, he’d have been free more than six months earlier. Kartsounes is pictured here in his room at the Rodeway Inn on May 21, 2021, in Appleton, Wis. Dan Powers / USA TODAY NETWORK-Wisconsin
Hoyt Purinton, president of the Washington Island Ferry line and a seasoned captain, leads a fleet of five ferries that navigate the waters off of Wisconsin’s Door County peninsula year-round. His family business has faced a host of challenges from Lake Michigan’s shifting waters in recent years. “It’s been a wild ride. It opens up your world view. It reminds you you’re not in charge,” Purinton says. He is seen here on Sept. 21, 2021. Brett Kosmider / Door County Pulse

There’s plenty to uncover close to home. In July, our team of reporters revealed that an Outagamie County judge used an unusual open-ended sentencing approach to monitor defendants’ sobriety or push them to pay fines and restitution. A former defendant said the sentence accelerated a downward spiral that eventually landed him in prison. “This isn’t my life. It can’t be,” he told me one night in tears.

More recently, we documented the impact of wildly fluctuating levels of Lake Michigan — a trend some climate scientists attribute to climate change — and how issues like erosion impact those living and working along the shoreline.

The reporting Wisconsin Watch produces, the training it leads, and the innovative partnerships and collaborations it embraces are just three ways we provide critical news in a sustainable model. But these efforts cost more than time: we spent more than $3,000 just to analyze court-record data for the story revealing the Outagamie County judge’s questionable practice.

As newsrooms across the state continue to dwindle, and political divides in communities deepen, your support is vital to sustaining our efforts to hold the powerful to account, protect the vulnerable and search for solutions.

Please consider it. Your donation will help ensure there’s a reporter to answer the phone if you ever need to make the call.

Help us answer the call is a post from WisconsinWatch.org, a non-profit investigative news site covering Wisconsin since 2009. Please consider making a contribution to support our journalism.