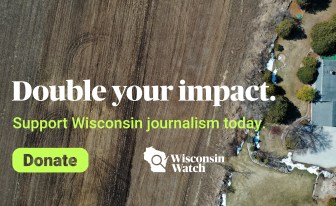 Thomas Jefferson famously said, “Were it left to me to decide whether we should have a government without newspapers or newspapers without a government, I should not hesitate a moment to prefer the latter.”

It is no secret that more than 200 years later, journalism and democracy are both in trouble. Since 2008, U.S. newsroom employment nationwide has plummeted by more than 50%. At least 77 newspapers in Wisconsin have closed their doors in the past 15 years.

And what happens when newspapers die? Researchers have actually measured the impact on democracy.

Voters don’t know who’s running for Congress — or what they stand for.

At the Wisconsin Center for Investigative Journalism, we take the challenge to use journalism to bolster democracy seriously. Through our news arm Wisconsin Watch, we provide in-depth, fact-checked stories that help residents and officials make the best decisions on how to solve pressing problems facing Wisconsin and beyond.

Just in 2021, Wisconsin Watch tackled issues including the state’s highest-in-the-nation incarceration rate for Black residents: a shocking 1 out of every 36 Black adults in Wisconsin is behind bars.

We examined how nearly 200 police officers were fired or forced out in Wisconsin — then hired by other departments in the state.

We showed how Wisconsin health officials still don’t test the water at homes of lead-poisoned children — even when those homes are served by dangerous lead pipes.

Ramiah Whiteside of Milwaukee holds a sign during a protest against the spread of COVID-19 in Wisconsin prisons outside of the governor’s mansion in Maple Bluff, Wis., on Nov. 24, 2020. Whiteside, who is formerly incarcerated, calls Wisconsin’s highest-in-the-nation rate of imprisoning Black residents “a slap in the face.” Whiteside works for Milwaukee-based EXPO, which advocates for formerly incarcerated people. Coburn Dukehart / Wisconsin Watch
Nazir Al-Mujaahid, top, and his sons, from bottom left: Shu’aib, 9, Sayfullah, 3, Suraqah, 6, and Naser, 10, are seen outside of their Milwaukee rental home on July 8, 2021. Shu’aib and Sayfullah have tested positive for high levels of lead, a neurotoxin that damages the brain and nervous system, particularly in young children. The family suspects the lead pipe that carries water into their home is to blame. Nazir Al-Mujaahid is among Milwaukeeans calling on the city to more quickly replace its estimated 70,000 remaining lead pipelines. Isaac Wasserman / Wisconsin Watch

Wisconsin Watch, in partnership with the Center for Public Integrity and Madison365, revealed that school officials in Wisconsin call police on their students at twice the national average. For Native American students, the rate was the highest in the nation.

We revealed a controversial sentencing practice by an Outagamie County judge that prolonged defendants’ involvement in the criminal justice system for months — even years — after their sentences should have ended.

Wisconsin Watch illustrated how residents living near one of the state’s most polluted waterways were not informed about the dangerous “forever chemicals” flowing past their backyards.

Melody Homesly, left, and Carnetta Galvin stand on a bridge that crosses Starkweather Creek near Galvin’s home of 16 years in the Darbo-Worthington neighborhood of Madison, Wis. Galvin says she was not initially aware that the creek contained high levels of PFAS, the group of hazardous, human-made chemicals that are drawing concerns across Wisconsin. “I feel disappointed and sad about not knowing what is affecting our health,” Galvin says. Homesly, Galvin’s longtime friend, says government leaders and those responsible for the pollution should clean it up. “Treat it like they would treat it if it was in their neighborhood and in their family and their kids’ health,” Homesly says. “Since it is right around poor and low-income —they are just sweeping it under the rug. Something has to be done immediately.” Photo taken on Aug. 3, 2021. Isaac Wasserman / Wisconsin Watch

We explored how misinformation was leading many health care workers in assisted living and nursing homes to refuse to protect themselves and the vulnerable people they care for by getting vaccinated.

And we showed how programs like the Ho-Chunk Nation’s Child Trust Fund Program would go a long way toward closing the massive wealth gap between white residents and people of color in Wisconsin. After our story was published, lawmakers introduced a bill to enact a baby-bond style program for the state of Wisconsin.

This type of in-depth journalism that strengthens democracy takes a lot of time and money. It is only possible because of the financial support of people like you.

Donate now and your donation will be doubled. Generous members of our Leadership Circle and Watchdog Club are pledging $40,000 to encourage you to match this amount by Dec. 31. Every dollar is matched and monthly donations are matched at their annual amounts.

Please make a gift today and have it matched!

Help democracy: Donate to Wisconsin Watch! is a post from WisconsinWatch.org, a non-profit investigative news site covering Wisconsin since 2009. Please consider making a contribution to support our journalism.