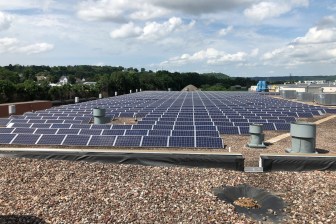 After years of regulatory uncertainty, a new proposal in Wisconsin would finally clarify that utility customers do not need to own their rooftop solar installations.

The draft legislation would authorize an arrangement known as third-party solar, in which a company installs panels for a customer and then either leases the panels or sells the power or net-metering credits to the property owner.

The model is allowed in most states and is a popular option for helping homeowners and businesses avoid the steep upfront costs of solar, and it also allows government and nonprofit entities like schools, churches, and hospitals to access tax incentives that they couldn’t otherwise tap.

Such arrangements are not explicitly prohibited in Wisconsin, but developers have been reluctant to enter them since utility We Energies halted a third-party-owned installation in 2018 for the city of Milwaukee, arguing that the solar developer would be acting as a public utility.

Two Republicans are co-sponsoring draft legislation, LRB 1550/1, which would specify third-party ownership is legal and mandate utilities interconnect such projects. The proposal is backed by the Wisconsin Conservative Energy Forum, with Executive Director Scott Coenen describing it as a matter of market choice.

“This is really a conservative argument around financing and consumer options, it’s a very pro-consumer bill,” said Coenen. “We shouldn’t be outlawing financing options for someone who wants solar.”

A U.S. Energy Administration map shows how Wisconsin compares to other states in generating solar electricity from small-scale projects — a category that includes projects less than 1 megawatt in capacity.

State Sen. Robert Cowles, R-Green Bay, and Rep. Rachael Cabral-Guevara, R-Appleton, circulated their bill for co-sponsors this month. The bill has added about 10 co-sponsors, and could be introduced this fall, according to advocates working with the legislators.

At least 29 states specifically authorize or allow third-party-owned solar, according to the organization DSIRE, and at least six states have raised legal barriers. DSIRE’s map lists Wisconsin’s status as “unclear,” but RENEW Wisconsin director of government affairs Jim Boullion said the group’s analysis shows Wisconsin is the only state where no types of third-party ownership have been possible.

“As far as we can tell, no other state has passed proactive legislation or regulations banning all forms of third-party financing,” he said.

Last summer, two other Republican legislators introduced a bill to clarify that third-party ownership of community solar installations is legal. That bill, SB490 and AB527, is now in committee, and is backed by the Wisconsin Conservative Energy Forum, environmental groups and builders and real estate trade groups, and opposed by utilities and energy cooperatives.

Stuck in a gray area

Solar developers and advocates have long sought a clear statement from regulators, legislators or the courts confirming that third-party ownership is legal.

Under third-party ownership, solar panels can be leased — potentially leading to ownership — and the property owner gets the energy or net metered credits directly.

The solar developer that owns the installation can also sell energy from the panels to their customer through a power purchase agreement, at an agreed-upon price. Both such arrangements mean the entity tapping the solar power does not need to pay for the panels up front, and much of the risk is removed from the investment.

Cody Van Ginkel, an electrician with Arch Electric, surveys rooftop solar panels he helped install on the management and maintenance facility of Westlawn Gardens, a public housing project in Milwaukee, in February 2019. The installation is part of the city’s plan to draw 25% of its energy from renewable resources by 2025. The city wanted to partner with Eagle Point Solar to power several municipal buildings, but We Energies refused to connect the buildings to each other. Eagle Point sued We Energies and the state Public Service Commission — demanding that the agency take a stance on the legality of third-party solar arrangements. The Dane County Circuit Court dismissed the case. Coburn Dukehart / Wisconsin Watch

After the city of Milwaukee contracted Iowa-based Eagle Point to build and co-own a 1 megawatt installation on six city buildings, in 2018 We Energies refused to do an interconnection to the grid and argued in letters that Eagle Point would be acting as a public utility.

Eagle Point sued We Energies and the state Public Service Commission demanding it take a stance on the issue, but a circuit court dismissed the case. The PSC has not acted on repeated pleas for it to clarify the legality of third-party ownership.

“Everybody is kind of pointing fingers at each other to figure out this issue — ‘we’re not the ones to resolve it, you have to resolve it,’” said Coenen. “Policymakers want to step up and bring some certainty to this market.”

The co-sponsorship memo circulated to legislators explained that an informal 2012 letter from a PSC division administrator triggered the legal limbo surrounding third-party solar financing. Responding to a state representative following a constituent query, the letter included guidance that said third-party financing would “meet the definition of a public utility.”

“This has consistently been used to prevent third-party financed arrangements and refute legal claims resulting in a ban in effect on these arrangements,” the legislation’s co-sponsorship memo said.

Solar proponents are hopeful the bill will pass, but are not expecting an easy path.

“There will be a lot of opposition from the utilities and obviously they have a lot of influence at the Capitol,” said Tom Content, executive director of the Citizens Utility Board. “But these are the kinds of issues folks have been wanting to tackle for a while.”

In emailed answers to questions, We Energies spokesman Brendan Conway said, “This proposal is bad policy that will shift costs to customers across Wisconsin who can’t afford or choose not to have solar panels. That’s why labor unions, business groups and utilities are all opposing it.  This cost shift is not theoretical, it is happening.”

Cody Van Ginkel, right, an electrician with Arch Electric, helps install a solar panel inverter in the electrical room of the Westlawn Gardens management and maintenance facility in Milwaukee in February 2019. With him is Matt Simonson, a lead installer for Arch Electric. The installation is part of the city’s plan to draw 25% of its energy from renewable resources by 2025. The city wanted to partner with Eagle Point Solar to power several municipal buildings, but We Energies refused to connect the buildings to each other. Draft legislation would clarify the legality of third-party solar ownership and require utilities to connect such projects in Wisconsin. Coburn Dukehart / Wisconsin Watch

Utilities nationwide have invoked the cost-shift argument in opposing the proliferation of distributed solar, arguing that once solar panels lower a customer’s bills, those customers are not paying their “fair share” to keep up the grid.

When asked whether third-party-ownership would create a different kind of “cost-shifting” than the spread of solar more generally, Conway did not directly answer but said, “We do not oppose rooftop solar, we interconnect on average more than one residential or business project a day. At the same time, it’s important to note that cost shifting is happening with those projects. People with rooftop solar do not pay their fair share of the poles, wires and other costs to serve them, yet they benefit from our reliable grid.”

He added that We Energies does not oppose the leasing of solar panels, saying, “What we do oppose, and what is illegal, is unregulated rooftop solar companies selling power to customers.”

Michael Barnett, project engineer at the architectural and engineering firm HGA, said many of his clients, including health care organizations and government agencies, would like to obtain solar through third-party ownership, but have been unable to do so.

“Because of the ambiguity there is a lot of hesitation to pursue it, and there’s not a lot of people out on the market offering it because they might not be able to complete the project” in the face of utility challenges, he said.

He said the financial incentives aren’t the only benefit of third-party ownership; his clients would also prefer another company manage and maintain the installation.

“These health care organizations, especially now with COVID, their focus is really on their patients,” Barnett said. “To go out and figure out how to get solar, they’re just too overwhelmed. Project managing a solar installation takes time away from projects related to patient care.”

In 2018, We Energies introduced a program called Solar Now where customers can get monthly payments by letting We Energies place its own panels on their property — an arrangement often referred to as Rent-a-Roof. Solar and consumer advocates said the arrangement denied customers market choice and didn’t let them fully benefit from solar.

“Utilities are basically owning the panel on your roof and getting their monopoly return on that,” said Content. “If you are shopping for a furnace, or shopping for a car, there are lots of lease options available where you can rent instead of own. (Third-party ownership) is just giving customers more optionality for solar.”

This article first appeared on Energy News Network and is republished here under a Creative Commons license. The Energy News Network is a nonprofit news site dedicated to keeping influencers, policymakers and citizens informed of the important changes taking place in the transition to a clean energy system. The nonprofit Wisconsin Watch (www.WisconsinWatch.org) collaborates with WPR, PBS Wisconsin, other news media and the UW-Madison School of Journalism and Mass Communication.

Amid utilities’ resistance, Wisconsin proposal would clear barrier for third-party rooftop solar is a post from WisconsinWatch.org, a non-profit investigative news site covering Wisconsin since 2009. Please consider making a contribution to support our journalism.