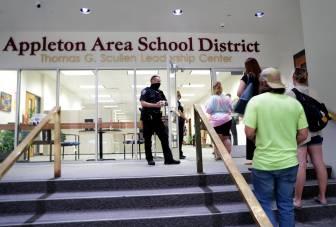 Of note: Today we highlight a Milwaukee Journal Sentinel report that Wisconsin ranks second nationally in attempted recalls of school board members, trailing only far-bigger California. Driving Wisconsin’s 11 recall efforts and those in other states: political backlash against COVID-19 safety measures and teaching about racism. The attempts have yet to succeed in Wisconsin, Rory Linnane and Molly Beck report. “Still, in some cases, targeted school board members have been threatened, stymied and felt backed into resigning during the recall attempts — then were replaced by those with opposing views.” Mequon-Thiensville residents are set to vote on a recall effort on Nov. 2.

Members of the public enter a school board meeting as protestors both in favor and against mask requirements gathered at Appleton Area School District’s downtown office on Monday, August 23, 2021 in Appleton, Wis. Wm. Glasheen / USA TODAY NETWORK-WISCONSIN

Wisconsin is second in nation for school board recall attempts, driven by disputes over masking, teaching race

Wisconsinites have attempted more recalls of school board members during the pandemic than every state except California, part of a nationwide surge driven by political divisions over pandemic protocols and the teaching of racism and history. The number of recall attempts against school board members this year in the U.S. — 81 petitions against 209 members so far — is double the total of any previous year tallied by Ballotpedia, a Middleton-based nonprofit. Groups pushing for recalls, echoing nationwide Republican talking points, have said they wanted new board members who would reject guidance from health officials, make masks optional and clamp down on teaching about the harms of racism.

Cases of COVID-19 are rising in Wisconsin nursing homes, where 88% of residents are vaccinated, but many workers are not. Deaths among nursing home residents are also increasing — doubling in one month, from mid-August to mid-September, according to AARP. New COVID-19 infections and deaths in residents of long term care facilities are nowhere near their peak from the pandemic; however, they are increasing due to breakthrough cases and too few vaccinated health care staff. There were 192 new COVID-19 infections over the course of four weeks ending Sept. 19, according to the group’s dashboard. In that same timeframe, 20 people in Wisconsin nursing home residents died from the disease.

A move to rein In cancer-causing ‘forever chemicals’

The Biden administration on Monday said it would require chemical manufacturers to test and publicly report the amount of a family of chemicals known as PFAS that is contained in household items like tape, nonstick pans and stain-resistant furniture, the first step toward reducing their presence in drinking water. Perfluoroalkyl and polyfluoroalkyl compounds, or PFAS refers to more than 4,000 man-made chemicals that are often called “forever chemicals” because they don’t break down in the environment. Exposure to the chemicals has been linked to certain cancers, weakened immunity, thyroid disease, and other health effects.

Read more from Wisconsin Watch: ‘Something has to be done’: Living along Madison’s Starkweather Creek, one of Wisconsin’s most polluted waterways. And from the Midwest Center for Investigative Reporting: Residents of Wisconsin region struggle with aftereffects of dangerous ‘forever chemicals’

Republicans who control the Legislature would maintain a large advantage in Assembly races under a redistricting plan they made public late Wednesday. The release of their proposed congressional and legislative maps propelled the state’s redistricting fight into the next stage. States must draw new maps every 10 years using census data to ensure districts have equal populations. Where the lines go can give one political party a big advantage over the other for a decade. Republican lawmakers plan to approve their plans as soon as next month, but Democratic Gov. Tony Evers is likely to veto them. That would leave it to the courts to decide how to draw the districts.

Read about redistricting’s contentious history in the Cap Times: Blurring the lines: Wisconsin braces for bitter redistricting battle, and listen to WPR’s Mapped Out podcast.

A civil liberties group is calling on the Oneida County Jail to reverse its policy banning inmates from receiving letters from friends and family members. In a new letter to Oneida County Sheriff Grady Hartman, the legal director of the American Civil Liberties Union Foundation of Wisconsin writes that the jail’s “complete refusal to deliver written correspondence to all people in the jail is clearly unconstitutional.” Oneida County may be the only jail in the state to refuse letters from outside friends and family members. It’s a policy Oneida County put in place in 2019 after Hartman said inmates received illegal drugs and contraband cellphones and pornography smuggled through the mail.

Wisconsin Weekly: Wisconsin is hotspot for school board recall efforts during pandemic is a post from WisconsinWatch.org, a non-profit investigative news site covering Wisconsin since 2009. Please consider making a contribution to support our journalism.