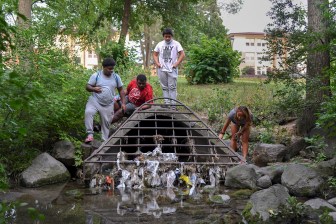 Of note: Today we highlight our photo-filled story about efforts to address PFAS pollution in Starkweather Creek — a key waterway in Madison that contains some of Wisconsin’s most polluted water. In 2019, Starkweather Creek contained higher levels of hazardous PFAS than any other waters the Department of Natural Resources tested that year. Isaac Wasserman of Wisconsin Watch interviewed and photographed people who live near the creek — including those who frequently fish there. He found that awareness of the creek’s chemical hazards remains mixed, despite Dane County’s initial steps toward addressing the problem. Shorthand for per- and polyfluoroalkyl substances, PFAS are a nationwide scourge and sometimes called “forever chemicals” because of how they accumulate in the body and persist in the environment.

Melody Homesly, left, and Carnetta Galvin stand on a bridge that crosses Starkweather Creek near Galvin’s home of 16 years in the Darbo-Worthington neighborhood of Madison, Wis. Galvin says she was not initially aware that the creek contained high levels of PFAS, the group of hazardous, human-made chemicals that are drawing concerns across Wisconsin. “I feel disappointed and sad about not knowing what is affecting our health,” Galvin says. Homesly, Galvin’s longtime friend, says government leaders and those responsible for the pollution should clean it up. “Treat it like they would treat it if it was in their neighborhood and in their family and their kids’ health,” Homesly says. “Since it is right around poor and low-income —they are just sweeping it under the rug. Something has to be done immediately.” Photo taken on Aug. 3, 2021. Isaac Wasserman / Wisconsin Watch

‘Something has to be done’: Living along Madison’s Starkweather Creek, one of Wisconsin’s most polluted waterways.

Carnetta Galvin and Melody Homesly stood on Galvin’s porch on an August evening. It was Galvin’s birthday, and the friends’ laughter reverberated into the streets of the Darbo-Worthington neighborhood in Madison, Wisconsin. Across the street, a stagnant body of water ran parallel to Galvin’s apartment building before fading into the distance. That’s Starkweather Creek, which wanders through northeast Madison before emptying into Lake Monona. Galvin, who has lived near the creek for 16 years, did not know that it contains some of Wisconsin’s most polluted waters until a reporter told her. Nor had she heard of PFAS, the group of human-made chemicals that are drawing particular concerns in the creek and across Wisconsin.

Former Supreme Court Justice Gableman, head of Republican review of Wisconsin election, says he does not understand how elections work

The attorney leading a partisan review of Wisconsin’s 2020 election acknowledged this week that he doesn’t understand how elections are supposed to be run. The admission by former state Supreme Court Justice Michael Gableman comes as he subpoenas mayors and election officials. His comment raises fresh questions about how long Gableman’s taxpayer-financed review will take. He called an Oct. 31 deadline set for him by Assembly Speaker Robin Vos of Rochester unrealistic. “Most people, myself included, do not have a comprehensive understanding or even any understanding of how elections work,” Gableman said in an interview.

Related story from The New York Times: Why Democrats see 3 governor’s races as a sea wall for fair elections

Wisconsin’s rooftops could support enough solar panels to meet two-thirds of the state’s electricity needs, generating more electricity than all fossil fuel sources combined last year. Yet a new study predicts fewer than 2% of those panels are likely to be installed under current market conditions. That’s because many people can’t afford the upfront costs of solar panels and lack financing options or don’t control their roofs — either because they rent or live in multifamily housing, according to a report released this week by the Public Service Commission.

The Canadian company Enbridge has reimbursed U.S. police $2.4 million for arresting and surveilling hundreds of demonstrators who oppose construction of its Line 3 pipeline, according to documents the Guardian obtained through a public records request. Enbridge has paid for officer training, police surveillance of demonstrators, officer wages, overtime, benefits, meals, hotels and equipment. Enbridge is replacing the Line 3 pipeline through Minnesota to carry oil from Alberta to the tip of Lake Superior in Wisconsin. The new pipeline carries a heavy oil called bitumen, doubles the capacity of the original to 760,000 barrels a day and carves a new route through pristine wetlands.

A University of Wisconsin-Madison computer sciences major works on an asynchronous quiz from his studio apartment near campus. The student is suffering from symptoms of long COVID, including brain fog and fatigue. Ruthie Hauge / Cap Times

Rachel Litchman awaited the campus accessible shuttle on the first day of school — a long-awaited return to in-person learning. After standing 15 minutes at the stop to no avail, Litchman, a part-time University of Wisconsin-Madison student who has Ehlers-Danlos syndrome, worried she may not make it to class on time. “The 80, which is something that I’ve taken in previous years, is not accessible to me because it’s packed super full,” she explained. For students with disabilities or those who are immunocompromised, the reentry into classrooms has brought feelings of isolation, anxiety and helplessness.  Litchman said accommodations offered to them last year, like online courses, recorded lectures, extra transportation and overall flexibility, have begun to disappear, making it more difficult for students with illnesses to learn.

Wisconsin Weekly: ‘Something has to be done’: Life along a toxic waterway is a post from WisconsinWatch.org, a non-profit investigative news site covering Wisconsin since 2009. Please consider making a contribution to support our journalism.