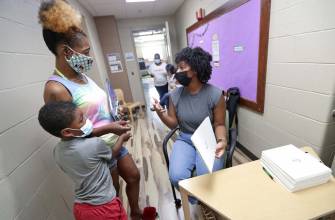 Of note: Today we highlight USA TODAY NETWORK-Wisconsin’s report on the  exodus of local health department leaders during the COVID-19 pandemic in Wisconsin, mirroring national trends. The Wisconsin Association of Local Health Departments and Boards lists 33 agencies out of 86 that lost top officials since March 2020, Madeline Heim reports. Officials said the turnover may be linked the stress of managing the pandemic and harassment — including threats of physical violence — that health officers have faced while responding to the politicized public health crisis.

Nearly 40% of local health department leaders in Wisconsin have left their jobs since March 2020, mirroring a national exodus during a difficult and divisive pandemic. In data provided to the USA TODAY NETWORK-Wisconsin, among the agencies that have lost top officials during the pandemic is the Wisconsin Department of Health Services, which has cycled through three while managing the state’s response to the crisis.

Madison Clerk Maribeth Witzel-Behl relies on a practiced plan to combat the depression fueled by sleep deprivation and an adrenaline crash that typically sets in after an intense election season. She takes about two weeks off, bakes hundreds of cookies and shares them with friends and family. Once that project is over, she can reset and return to work. But after last November’s presidential election, Witzel-Behl’s immune system crashed, she got tested for COVID-19 and isolated. In the midst of dealing with her own health, she was accused of election fraud, and people online threatened her with gun violence.

‘As dumb as a bag of hammers’: Kevin Nicholson goes after fellow Republican Rebecca Kleefisch on ‘ballot harvesting’ strategy

Rebecca Kleefisch’s plan to use “ballot harvesting” in her bid for governor is getting mixed reviews from Republicans, with some championing the notion and one of her potential primary opponents saying anyone who supports the idea is “as dumb as a bag of hammers.” Marine veteran Kevin Nicholson made the comment at an event Tuesday in Oshkosh hours after the Milwaukee Journal Sentinel reported Kleefisch over the weekend called on Republicans to “hire mercenaries” and host ballot-gathering events to compete with Democrats in 2022 and then ban the practice after she is elected.

Read more from the Milwaukee Journal Sentinel: A woman named Carol is helping Wisconsin Republicans review the 2020 election. No one will provide her last name.

Decades after a football career that included two seasons with the Green Bay Packers, Camillo Capuzzi’s body was tattered. A quarterback and defensive back for the Packers in 1955 and ’56, Capuzzi played when plastic helmets were in their infancy. When chronic pain met him later in life, making menial tasks difficult, it was no surprise. What Capuzzi and many contemporaries might not have anticipated was their football careers potentially giving them brain damage. On the surface, Capuzzi, who had  Alzheimer’s disease, was the kind of former NFL player who should benefit from the league’s landmark 2017 concussion settlement. The league promised to provide payments to former players with one of six neurodegenerative diagnoses, including Alzheimer’s. Yet Capuzzi’s family is among many waiting for the NFL to provide financial assistance it believes is owed.

‘Well worth the investment’: After a Journal Sentinel report, more kids in Milwaukee will get 529 college savings accounts

More children in Milwaukee will have a 529 college savings account through a city-led program after a report in the Milwaukee Journal Sentinel spotlighted the issue. The program, Fund My Future Milwaukee, seeks to open college savings accounts for all 5-year-old kindergarteners in schools across the city. It is part of a growing movement to use the accounts to change educational outcomes, invest in the future workforce and narrow inequities in opportunity. The local program faced hurdles in reaching a data-sharing agreement with Milwaukee Public Schools. But since the Journal Sentinel’s reporting, an agreement has been finalized.

Wisconsin Weekly: Report: 2 in 5 Wisconsin health officers have retired or resigned during pandemic is a post from WisconsinWatch.org, a non-profit investigative news site covering Wisconsin since 2009. Please consider making a contribution to support our journalism.