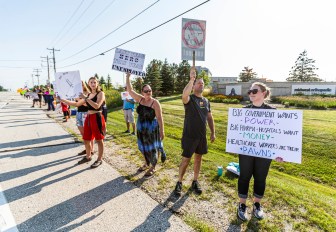 Of note: This week we highlight Wisconsin’s poor showing when it comes to vaccinating long-term care workers. At about 62%, the state ranks 32nd, including D.C., Guam and Puerto Rico, in the percentage of nursing home and assisted living staff who are vaccinated. The story, reported by Wisconsin Watch’s Madeline Fuerstenberg, features nursing student Hannah Miller of Eau Claire. Miller believes she should have the same right as the patients she cares for to control her health care. But studies show having a highly vaccinated staff is the key to protecting vulnerable long-term care residents, who make up 42% of all deaths in Wisconsin from COVID-19.

Protesters hold up signs in front of Ascension SE Wisconsin Hospital in Franklin, Wis., during a rally against mandatory vaccination of employees on Aug. 27, 2021. President Joe Biden recently ordered that federal funding be withheld from long-term care facilities that do not require their staff to be vaccinated. The industry has complained it is being singled out, potentially driving already scarce workers to other health care sectors. Credit: Scott Ash / Now News Group

Many long-term care staff in Wisconsin reject vaccine, despite risks

Hannah Miller, a nursing student and employee of a long-term care facility in Eau Claire, Wisconsin, received her first dose of the COVID-19 vaccine on Aug. 23 — and not voluntarily.  “(The vaccine) hasn’t been out long enough to know what long term effects are,” Miller told Wisconsin Watch. Miller said she was required to receive the vaccine by the hospital where she is completing her clinicals for school. She said she would not be able to graduate without getting it. Increasingly, health care facilities in Wisconsin and around the country require their employees to be vaccinated. Yet in long-term care facilities such as nursing homes — where residents are highly susceptible to severe illness and death from COVID-19 — some workers refuse the shot.

Related coverage from the Wisconsin State Journal: Unvaccinated nearly 9 times as likely to be hospitalized with COVID-19 in Wisconsin

How Wisconsin is ruled by a shadow governor

Robin Vos isn’t the governor of Wisconsin. But he certainly acts like he is. For nearly three years, the state Assembly speaker has used his Republican majority — and the support of the Republicans who control the state Senate — to block, thwart or resist almost every significant move made by Democratic Gov. Tony Evers. Before Evers even took office in 2019, Vos led the charge to strip power from the incoming governor. When the pandemic hit, Vos helped curb Evers’ authority to declare public health emergencies. This spring, Vos tried to commandeer federal rescue money that the governor had the authority to dole out. And when it comes to the governor’s legislative priorities, Vos has killed every one.

He beat her repeatedly. Family court tried to give him joint custody of their children.

Jennifer Moston was about seven months pregnant when, she said, her husband grabbed her by the arms, picked her up and threw her against the staircase. Each time she tried to get up, he pushed her down again. Such abusive episodes continued for several years, she said, until 2016, when he allegedly tried to strangle her. She went to the police and filed for divorce. It seemed obvious to Jennifer that her husband, Ryan, shouldn’t get custody of their 3-year-old son, as Ryan now faced felony charges of domestic violence. How could someone with a violent history be trusted with a child? How could she stay out of harm’s way if she was interacting with him for drop-offs? Jennifer assumed that the family court in her Wisconsin county would make her safety and that of her son a priority, and that the system would help her cut off contact with Ryan. But it didn’t.

‘I just want to leave’: Afghan refugees speak out about conditions at Fort McCoy

Waiting in line for hours to get food, wearing the same clothes day after day, getting harassed by some of the Afghan men, not knowing the timeline for resettlement — all are problems a pair of Afghan women say they have faced staying at Fort McCoy military base in western Wisconsin, though officials said Tuesday the issues are being addressed. “There are many people who don’t have anything to wear, anything to eat,” an 18-year-old Afghan woman told the Wisconsin State Journal. “I just want to leave this place so I can start my own life.”

The attorney heading a partisan review of Wisconsin’s presidential election has been consulting with a losing U.S. Senate candidate who appeared in a conspiracy theory-fueled film, falsely claimed a million ballots were destroyed in Massachusetts and recently linked his election doubts to a science-fiction novel. Shiva Ayyadurai has been spreading untrue claims about elections — suggesting last month without credible evidence that more than 4% of Donald Trump’s votes were shaved off his totals. Now, he’s talking to former Wisconsin Supreme Court Justice Michael Gableman for Gableman’s review of the presidential election. Ayyadurai’s exact role is not clear.

Wisconsin Weekly: Many long-term care staff in Wisconsin reject vaccine, despite risks is a post from WisconsinWatch.org, a non-profit investigative news site covering Wisconsin since 2009. Please consider making a contribution to support our journalism.