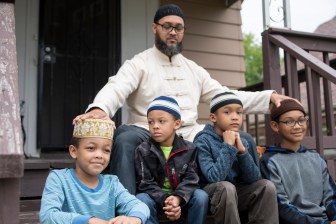 Of note: This week we highlight our update on efforts to remove dangerous lead pipes serving hundreds of thousands of homes and businesses in Wisconsin. Diana Butsko, a Fulbright scholar who reported for Wisconsin Watch this summer, found that statewide, communities have removed about 20% of known lead service lines. But in Milwaukee, the progress has been much slower. At the current pace, it would take the city 70 years to get the lead out. Butsko also found that public health departments that investigate childhood lead poisoning cases rarely test the water as a possible source. The package includes a primer on what families can do if a child has been lead poisoned. In a companion piece, Wisconsin Watch intern Madeline Fuerstenberg, the Ann Devroy Fellow from the University of Wisconsin-Eau Claire, examines that city’s program to remove all of its 1,266 lead service lines.

Nazir Al-Mujaahid, top, and his sons, from bottom left: Shu’aib, 9, Sayfullah, 3, Suraqah, 6, and Naser, 10, are seen outside of their Milwaukee rental home on July 8, 2021. Shu’aib and Sayfullah have tested positive for high levels of lead, a neurotoxin that damages the brain and nervous system, particularly in young children. The family suspects the lead pipe that carries water into their home is to blame. Nazir Al-Mujaahid is among Milwaukeeans calling on the city to more quickly replace its estimated 70,000 remaining lead pipelines. Credit: Isaac Wasserman / Wisconsin Watch

Sitting in his North Side Milwaukee rental house, Nazir Al-Mujaahid spoke matter-of-factly about the challenges his son Shu’aib faces, while the quiet 9-year-old lingered in another room. Shu’aib tested high for high levels of lead. He excels at sports, Al-Mujaahid said, but his speaking skills developed late, and he still lags behind his 6-year-old brother in reading. Al-Mujaahid, 45, believes that lead poisoning is hindering his son’s development. Confirming precisely where the lead came from is impossible, but Al-Mujaahid suspects the aging lead pipelines that carried drinking water into his home.

A loose network of conservative groups with ties to major Republican donors and party-aligned think tanks is quietly lending firepower to local activists engaged in culture war fights in schools across the country. While they are drawn by the anger of parents opposed to school policies on racial history or COVID-19 protocols like mask mandates, the groups are often run by political operatives and lawyers standing ready to amplify local disputes. In a wealthy Milwaukee suburb, a law firm heavily financed by a conservative foundation that has fought climate change mitigation and that has ties to former President Donald Trump’s efforts to overturn the 2020 election helped parents seeking to recall Mequon-Thiensville school board members, chiefly over the board’s hiring of a diversity consultant. A new national advocacy group, Parents Defending Education, promoted the Wisconsin parents’ tactics as a model.

Attorneys Victor Forberger and Paul Kinne speak at a press conference announcing a class-action lawsuit challenging a Wisconsin law that bars people receiving federal disability assistance from qualifying for state unemployment benefits in Madison, Wis., on Sept. 7, 2021. Eight plaintiffs filed a class-action lawsuit in U.S. District Court in Madison Tuesday hoping to recoup the benefits they and other people with disabilities in Wisconsin were denied — and undo the law that barred them from accessing the aid. Credit: Will Cioci / Wisconsin Watch

Tracy Long of Fond du Lac County is no stranger to Wisconsin’s unemployment system. With 30 years of experience in manufacturing, she’s been subject to the ebbs and flows of the industry. Long says she has applied for unemployment aid dozens of times in the past three decades. But after a workplace injury that resulted in three back surgeries in as many years left her unable to complete many of the tasks she’d previously performed, in 2019 she turned to the state’s unemployment system for relief — one that would soon be strained close to its breaking point by the pandemic. This time, however, due to her disability, the system that in years past helped keep her afloat barred her from the aid meant to help jobless workers weather employment gaps. With the help of Madison attorney Victor Forberger, Long and seven other plaintiffs on Tuesday filed a class-action lawsuit in U.S. District Court in Madison hoping to recoup the unemployment benefits they and other people with disabilities in Wisconsin were denied — and undo the law that barred them from accessing the aid.

When coronavirus patients flooded hospitals in November and December, nurse Jackie Rehberg worked the COVID-19 unit at SSM Health St. Mary’s Hospital in Madison even as she was concerned about her own health because she was pregnant. As she went on maternity leave in May, shortly after vaccines became widely available, cases and hospitalizations plummeted. By the time she returned last month, a surge fueled by the delta variant was underway. Her 12-hour shifts, the protective clothing she must wear and the uncertain fate of her patients remain the same, but this wave feels different. “Before, there was a lot more fear,” Rehberg said. “This time it’s more frustrating. At times, it can feel really infuriating because there is a vaccine out there that can help prevent some of the severe illness that we’re seeing.”