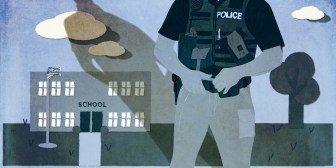 Of note: This week we highlight our collaboration with the Center for Public Integrity, USA TODAY and Madison365, which examines racial disparities in police involvement at schools. An analysis of 2017-18 data from all 50 states plus the District of Columbia and Puerto Rico found that Wisconsin had the fourth highest rate of referring students to the police for school-related incidents. The state also had the highest rate nationally when it came to referring Native American students to the police — a rate more than three times higher than for their white peers.

Public schools in Wisconsin referred students to police twice as often as schools nationwide in 2017-18 — nine students were referred to police for every 1,000 students enrolled compared to the national rate of 4.5, a Center for Public Integrity analysis of U.S. Department of Education data found. Mary Ann Lawrence / USA TODAY

Wisconsin schools called police on students at twice the national rate — for Native students, it was the highest

The 2017-18 school year was difficult at Lakeland Union High School. Disciplinary problems came in waves for the Oneida County school. In February 2018, two students were arrested for making terror threats — just days after the mass shooting at Florida’s Marjory Stoneman Douglas High School. Lakeland referred over 6% of its students to police, including the two teenagers, whose separate threats shut down the school for a day. It wasn’t the only Wisconsin district to see a high level of police involvement that school year. Public schools in Wisconsin referred students to police twice as often as schools nationwide in 2017-18, a Center for Public Integrity analysis of U.S. Department of Education data found. Just three states — New Hampshire, Pennsylvania and Virginia — reported higher rates of referral than Wisconsin. Students with disabilities and students of color bore the brunt of school policing in Wisconsin, data show.

Ojibwe tribes in Wisconsin filed a federal lawsuit Tuesday against the Department of Natural Resources and Natural Resources Board in an effort to stop the state’s wolf hunting and trapping season scheduled to begin Nov. 6. The action claims that in setting up the proposed fall wolf season the defendants “purposefully and knowingly discriminated against the Ojibwe Tribes by acting to nullify their share.” It also asserts the NRB failed to use sound biological principles in establishing a kill quota of 300 wolves.

Three years after a UW-Madison group stripped the name of a prominent alumnus from a theater over a past association with a student group that shared a name with the Ku Klux Klan, the NAACP and others are calling for a course correction. The national headquarters for the civil rights organization, along with two dozen scholars, actors and activists, sent a letter last week urging for the return of award-winning actor Fredric March’s name to a “place of honor” on campus. The letter-signers say March’s legacy has been marred because of the name removal, which they described as “guided solely by social-media rumor and grievously fact-free, mistaken conclusions.”

Related opinion piece from The New York Times: The University of Wisconsin smears a once-treasured alum

On the front lines of the U.S. homicide epidemic: Milwaukee faces historic violence

Jeremiah Hughes was mowing a lawn on a Wednesday afternoon when two armed men barged through an alley gate. Shots rang out. Hughes, 24, died in the yard and was taken to the morgue and then to El Bethel Church of God in Christ, where days later he lay in an open, emerald-green casket as muffled cries rose through a hymn on a loudspeaker. Velvet ropes surrounded his casket to prevent people from grabbing for him in their despair. Milwaukee is in the grip of the worst violence in its modern history. It saw 189 killings last year, a 93% increase from 2019 and the most ever recorded. The jump reflects a nationwide trend. In one study, researchers from the nonprofit Council on Criminal Justice looked at 34 cities and found that 29 had more homicides last year than in 2019. The overall rise was 30%, though in most places killings remained below their peaks in the 1990s. Among the 19 cities with more than half a million people, none saw a bigger surge than Milwaukee.