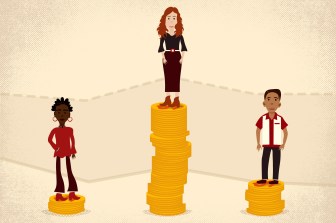 Of note: This week we highlight the latest installment in Wisconsin Watch’s Color of Money series. This story, reported by Harrison Freuck and Zhen Wang, looks at proposals to give people a basic amount of income to close large, persistent wealth and income gaps in the United States, especially between white and Black residents. Three Wisconsin cities — Milwaukee, Madison and Wausau — plan to roll out basic income programs this year. Milwaukee actually ran such a project in the mid-to-late 1990s, which participants including Towanda Perkins credit with helping them get jobs and get off public assistance.

The typical white family has eight times the wealth of the typical Black family and five times the wealth of the typical Hispanic family, according to the Federal Reserve Board’s 2019 Survey of Consumer Finances. That survey shows long-standing and substantial wealth disparities between families in different racial and ethnic groups changed little since the last survey in 2016. Credit: Claire DeRosa / Wisconsin Watch

Towanda Perkins is a single mother with two grown sons. She works as an office manager at a nonprofit organization in Milwaukee. During the pandemic, she has seen many mothers with children who have lost their jobs and been evicted by landlords. Perkins is expecting to see more homelessness once the temporary halt on certain evictions issued by the CDC — recently extended to Oct. 3 — ends. Entrepreneurs, scholars and politicians, including 2020 Democratic presidential candidate Andrew Yang, have proposed programs such as guaranteed income or universal basic income to alleviate a persistent wealth and income disparity, especially between white and Black residents. Such programs give all residents, or in some cases just low-income residents, a set income to be used however recipients see fit as a way to meet basic needs.

The parents of a man fatally shot during last summer’s violent demonstrations in Kenosha on Tuesday sued authorities alleging they incited the bloodshed by allowing Kyle Rittenhouse and other armed civilians who clashed with protesters to “mete out punishment as they saw fit.” The federal lawsuit filed in Milwaukee on behalf of Anthony Huber’s estate seeks unspecified damages against leaders and officers in the city of Kenosha and Kenosha County police departments. Rittenhouse, at the time 17 and carrying an assault-style rifle, allegedly opened fire on Joseph Rosenbaum, 36, and Huber, 26, of Silver Lake, killing both. A third man, Gaige Grosskreutz, was shot in the arm but survived. Authorities say Huber, toting his skateboard, was trying to disarm Rittenhouse shortly after the teen shot and killed Rosenbaum. “At the end of the day, (police) basically decided to turn the streets over to a bunch of armed vigilantes,” said Chicago attorney Anand Swaminathan, who filed the lawsuit on behalf of Huber’s estate.

Previously from Wisconsin Watch: Militia member says Kenosha police sought to push protesters toward them on night of deadly shootings

Jaleesa Gray plays with her children outside her home on June 15, 2021, in Green Bay, Wis. Gray struggled financially for many years before becoming a homeowner. People like Gray who have received public benefits run the risk of losing them if they make too much money. Credit: Samantha Madar / USA TODAY NETWORK-Wisconsin

‘It’s all or nothing’: A small pay bump can cut benefits for Wisconsin workers

Owning a home once seemed like “an impossible dream” to Jaleesa Gray, though she began thinking about it when her son was born a decade ago. Up until two years ago, Gray was moving nearly every year. Twice, she lived in House of Hope, a Green Bay shelter for women and children. During the pandemic, Gray lost her job. And she faced another problem: Because she receives food stamps and day care assistance — and because those vital benefits go away once she earns a certain amount of money — she had to make sure she didn’t make too much money when she returned to work. For many people, a small increase in pay can mean a disproportionately greater decrease in benefits. This effect, called the “benefit cliff,” makes decisions about a new job or career advancement difficult.

One of the Wisconsin Legislature’s most conservative lawmakers and a vocal opponent of mask and vaccine mandates has tested positive for COVID-19. State Sen. André Jacque was at a hospital Monday with pneumonia. The Journal Sentinel first reported Tuesday that Jacque tested positive late last week. In a message, Jacque said he’s uncertain how he contracted COVID-19. Aside from some fatigue, which “has been a long-standing health concern” for the Republican from De Pere, he was mostly asymptomatic when he tested positive after returning home from Madison. Jacque testified at a packed Capitol hearing Wednesday during which he didn’t wear a mask. State Sen. Chris Larson, D-Milwaukee, called on GOP legislative leaders to contact people who attended the seven-hour hearing “so they can schedule a COVID test and follow necessary precautions.”