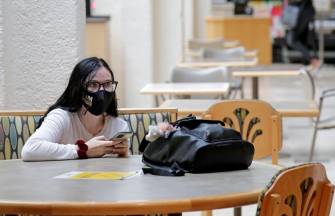 Of note: This week we highlight the latest installment of our series, Color of Money, which examines the exclusionary policies and other reasons why Wisconsin’s Black residents own less, earn less and owe more on average than whites — and what can be done to narrow the gap. Reporters Ben Baker and Zhen Wang focus on “baby bonds,” a program touted by former presidential candidate U.S. Sen. Cory Booker as a way to narrow racial wealth disparities. The reporters profile a Ho-Chunk tribal member who got a large payout upon turning 18 and finishing high school. While “18 money” allowed Donald Robert Greengrass Jr. to buy a La Crosse restaurant while he was still in college, others have quickly squandered their money — raising questions about what restrictions, if any, a national program should have.

Donald Robert Greengrass Jr. is seen outside his La Crosse, Wis., business Greengrass Cafe, which he opened with money he received from the Ho-Chunk Nation’s Child Trust Fund Program when he turned 18. Policy makers have proposed a similar national “baby bond” program to help low-income children entering adulthood have a nest egg they could use to pay for college, buy a house or pay for necessities. Photo taken July 12, 2021. Credit: Will Cioci / Wisconsin Watch

On a recent weekday, Donald Robert Greengrass Jr., 29, greeted locals and chatted with staff at his restaurant in La Crosse, Wisconsin.  While a college student, Greengrass came up with a bold idea of running his own business. But that required money. Luckily, as a member of Wisconsin’s Ho-Chunk Nation, Greengrass received a large sum — about $150,000 before taxes — after graduating from high school. The tribal nation has distributed payouts to members when they reach early adulthood since the early 1990s, financed by the tribe’s gambling arm. U.S. Sen. Cory Booker last year floated the idea of a government-funded program for all U.S. children. The “baby bond” proposal was designed in part to narrow a yawning gap in which Black families on average have roughly one-tenth of the wealth of white families.

During his time on the bench, Outagamie County Circuit Judge Vincent Biskupic has pushed many defendants to pay their court-ordered financial obligations, often calling them back for so-called review hearings to receive updates on the status of their payments. While Biskupic’s attorney defends the practice, experts involved in the collection of court-ordered payments in Outagamie County and elsewhere told Wisconsin Watch and WPR the judge’s involvement in recouping payments is atypical. Biskupic is pictured in 2018 at the Outagamie County courthouse in Appleton, Wis. Credit: Danny Damiani / USA TODAY NETWORK-Wisconsin

Over the past seven years, in at least 52 cases involving 46 defendants, Outagamie County Circuit Judge Vincent Biskupic has used “review hearings” to either monitor a defendant’s behavior or to pressure them to pay court-ordered financial obligations, a Wisconsin Watch and WPR analysis found. In 23 of those cases, court records indicate that Biskupic monitored defendants’ payment progress. Between 2018 and 2020, Biskupic had four people arrested for failure to show up for review hearings related to their unpaid financial obligations. These practices are a departure from the norm — and seen by some as a poor use of resources. And the chief judges who lead Wisconsin’s circuit court system have warned that jailing poor people for failure to pay court-ordered financial obligations could violate their constitutional rights.

Town of Peshtigo residents have lived with PFAS pollution for years. They’re still waiting for a permanent source of drinking water.

On a warm spring day, Kayla Furton sat on the porch of her childhood home in the Town of Peshtigo just off Shore Drive overlooking Green Bay. The property has been in her family for decades, and to her it’s more than just a house. The mother of three and her husband bought the home from her parents in 2016. They soon learned their home was one of many in the area that have been affected by PFAS contamination. Furton and around 140 other residents in the corner of northeastern Wisconsin have been drinking bottled water for years due to PFAS pollution of private wells. The contamination stems from the use of firefighting foam that contained the chemicals at Tyco Fire Products’ fire training facility in Marinette.

Teresa Scott, a sophomore from Milwaukee majoring in photography, sits in the student union on the University of Wisconsin-Milwaukee campus on Monday. Credit: Mike De Sisti / Milwaukee Journal Sentinel

University of Wisconsin officials who want to ward off a rising COVID-19 caseload now must get permission from the Legislature to implement masking, testing or vaccination requirements, according to a plan Republicans adopted Tuesday. Within hours, UW-Madison’s chancellor tested the issue by imposing a mask requirement without saying whether she would seek the approval of lawmakers. The Joint Committee for Review of Administrative Rules voted remotely without holding debate on the motion to require legislative approval for COVID policies on campuses. All six Republicans voted for the proposal and all four Democrats voted against it.

Two weeks after being released from federal prison, Ruben Gaona made it his goal to become a case manager in 2017. Although some scoffed at his plans, he was confident, and when he applied for the position, he checked the box that said “felon.” But he quickly learned how employment prospects are hindered by that label. Suddenly the position he wanted had a one-year waitlist, and he was steered to a low-paying janitorial job. Undeterred, he contacted the company directly and got the job he wanted. His experiences pushed him to launch an idea that would eventually become The Way Out, an employment app that helps those who have been incarcerated overcome barriers.