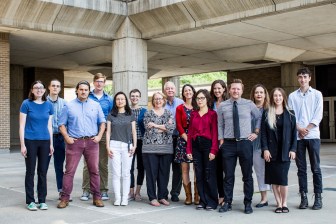 Mario Koran joined the Center in July 2021 as an investigative reporter. Credit: Will Cioci / Wisconsin Watch

The Wisconsin Center for Investigative Journalism and its news arm, Wisconsin Watch, have added two investigative reporters to the staff, and we are bidding adieu to our largest class ever of summer interns and fellows.

Mario Koran joined the Wisconsin Watch staff as an investigative reporter in July after serving as a 2021 Knight Wallace fellow at the University of Michigan. Previously, Koran was a West Coast correspondent for the Guardian US and covered education for Voice of San Diego, where he was named 2016 reporter of the year by the San Diego Society of Professional Journalists. His work has appeared in The New York Times, The Appeal and the Milwaukee Journal Sentinel. Koran was a Wisconsin Watch intern in 2012-13. He holds a bachelor’s degree in Spanish literature and a master’s in journalism from the University of Wisconsin-Madison. Koran’s recent stories include contributions to the Wisconsin Watch-WPR series Justice Deferred, a look at an Outagamie County judge’s unusual sentencing practices.

Brenda Wintrode joined the Center in July 2021 as a Roy W. Howard fellow.

Brenda Wintrode also joined Wisconsin Watch in July. She holds a bachelor’s degree in business administration from Bryant University in Rhode Island. After working as a cemetery manager in California and a legislative advocate for the Maryland NAACP, she switched careers and was named the Philip Merrill College of Journalism’s outstanding master’s student when she graduated in 2020. As a reporter for the Howard Center, she was the lead writer on an award-winning investigation of the federal CARES Act’s failure to prevent evictions during the pandemic. She also covered Maryland state government for Capital News Service and reported and analyzed data for Maryland Matters. Wintrode joins Wisconsin Watch on a one-year Roy W. Howard Fellowship.

The Center offers internships and fellowships year-round. More than 60 journalists have received such training since 2009.

A record number of interns and fellows worked on the news and business sides of the Center this summer. They include Diana Butsko of Ukraine, a Fulbright Scholar studying at Southern Illinois University; Zhen Wang, Will Cioci, Dana Brandt and Abigail Steinberg, students and recent graduates of UW-Madison’s School of Journalism and Mass Communication; Madeline Fuerstenberg, UW-Eau Claire’s Ann Devroy fellow; Isaac Wasserman of the University of Oregon; Rachel Henderson and Noelle Alviz-Gransee of the University of Missouri; and Hannah Davis of Carleton College. Some interns will be staying on beyond the summer or returning after a hiatus, including Wang, Cioci and Lauryn Azu, all UW-Madison students.