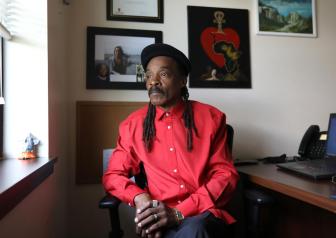 Of note: This week we highlight our coverage of the lingering challenges and tough choices that some Wisconsinites face in trying to rejoin the workforce during the pandemic — even as some industries ramp up hiring and pay as COVID-19 infections wane in parts of the state.

Bram Sable-Smith of Wisconsin Watch and WPR interviewed 10 people who are trying to rebuild their lives after losing work during the pandemic. They described mismatches on job openings and skills or struggle with child care or transportation — including a Milwaukee man who sold both of his vehicles to make rent after losing his job. Some are still waiting on unemployment aid from the pandemic’s earliest days.

Separately, Vanessa Swales of Wisconsin Watch reports on fears of a “tsunami of evictions” in Milwaukee County and elsewhere as a federal moratorium nears its July 31 expiration date.

Karen Miller, 65, was laid off from her job digitizing government documents for Data Dimensions in Janesville, Wis., in March 2020 and has been unable to find work since. She spent down her savings while waiting 11 weeks to receive unemployment compensation. She has a heart condition, and work search sites continue to send her listings for jobs she can’t perform. Miller is seen at home in Rockford, Ill. Credit: Will Cioci / Wisconsin Watch

‘We aren’t a bunch of lazy people’: Rejoining workforce isn’t easy for some who lost jobs to COVID-19

Karen Miller wants to work. Ideally, the 65-year-old would return to her old job of digitizing government documents for Data Dimensions in Janesville, Wisconsin. But she can’t. The company laid her off in March 2020 when COVID-19 struck, and it later cut more than 100 employees after losing a contract. As the state requires, Miller since May has conducted at least four weekly “work search actions” to keep receiving the state’s maximum for unemployment benefits — but often discovers only listings for jobs she can’t perform, including physically demanding warehouse and delivery work. Few stories like Miller’s have circulated in media coverage of the late-pandemic economy — as vaccinations allow businesses to reopen and a spotlight shines on their frantic search for workers.

Karianne, who asked that her last name be withheld, was facing an eviction in April 2020. She applied for multiple rental assistance programs but never heard back, despite numerous attempts to contact them. She ultimately received an eviction notice, which required her to go to court to stay in her home. “There are so many people that need help right now, unfortunately. And I think it’s just a matter of the system is just so backlogged, and so they’re just drowning right now,” she says. Karianne now volunteers with the Milwaukee Autonomous Tenants Union. She is seen at a friend’s apartment on June 24, 2021 with signs the union brought to a protest against a landlord who recently raised rents. Credit: Will Cioci / Wisconsin Watch

Freda Young had to move quickly in November. A dispute with her neighbor made staying in her home unsafe. Three months had passed without an update on the status of her application for thousands of dollars in rental assistance. Young was terrified she and her two children would be left homeless. She is just one of the Milwaukee County residents interviewed by News414 who are struggling to navigate rental assistance programs offered through Milwaukee County and the city of Milwaukee.

Related coverage: How to get rental assistance in Wisconsin

What’s Ron Johnson thinking? All eyes are on the controversial conservative as 2022 election looms

When Democrats look at Ron Johnson, they can taste victory. But that’s nothing new. It was a miscalculation in 2010. And again in 2016. But 2022? Well, they’re pretty sure this time will be different. Democrats might be right — but they also might not get a chance to find out if the Republican senator chooses to keep his 2016 pledge to make his second term his last. Two things are true about the former plastics CEO. One, he’s the most vulnerable incumbent senator on the map in 2022, should he choose to seek re-election. And two, Democrats and Republicans have repeatedly underestimated him from the moment he stepped into the Wisconsin political arena a little more than a decade ago.

‘Not everyone has to come to jail’: COVID-19 changes could lead to sweeping transformation

James Morgan said his GPS device must have malfunctioned on Christmas Eve when officers came to arrest him, a well-documented problem with Wisconsin’s GPS monitoring program. Morgan’s arrest was a bit of an exception in 2020. To prevent the spread of COVID-19, Dane County dramatically reduced its jail population last year, aided by the Wisconsin Department of Corrections’ decision to send fewer people to jail for breaking a probation or parole rule. The relaxed rules looked like many of the changes advocates for the incarcerated have long been seeking.

Related coverage: ‘He shouldn’t have had to die’: COVID-19 infects half of Wisconsin inmates, five times the overall state rate

Four indicted on arson, other crimes in federal cases in connection with Kenosha riots

Four men in two separate cases have been indicted on arson charges and other crimes connected with the rioting and civil unrest in Kenosha that followed the police shooting of Jacob Blake in late August last year. Acting U.S. Attorney Richard Frohling of the Eastern District of Wisconsin said the federal grand jury on July 7 indicted the men in two separate cases. In the first case, Allen King, David Garner and Kevin Martinez were charged with conspiring to steal controlled substances and transport stolen goods in interstate commerce. In the second case, Devon Vaughn is charged with arson in connection with a fire that destroyed the B&L Office Furniture store at 1101 60th St.

Wisconsin Weekly: Wisconsinites struggle to rebound after losing work to COVID-19 is a post from WisconsinWatch.org, a non-profit investigative news site covering Wisconsin since 2009. Please consider making a contribution to support our journalism.