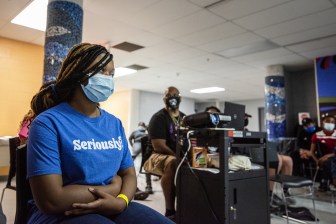 Of note: This week we highlight WPR’s coverage of a sobering trend in Milwaukee, where homicides hit a record high in 2020 and have continued that pace this year. Many of the victims are children. During 2021’s first four months, seven Milwaukee children were shot and killed. Those included 16-year-old Rodney Armstrong Jr., whose family described him as a computer whiz who loved church and his mother, Corrinne Hess reports. Additionally, 27 non-fatal shootings involved children.

In hopes of slowing the violence, local nonprofits are launching a mentorship program for youth who have been involved in the justice system, Hess reports.

‘I would always say be careful’: Milwaukee grapples with uptick in shooting deaths among youth

Rodney Armstrong Jr. wanted to be a computer technician when he graduated from Washington High School in Milwaukee. His mom, Sheila Jordan, said the 16-year-old was a computer whiz, who also loved his church and her — even getting her name and birthdate tattooed on his arm. Rodney was shot and killed May 5 while in the backseat of a car near North 68th Street and West Fond du Lac Avenue on Milwaukee’s Northside. Milwaukee police have not released any additional details about the shooting. In Milwaukee, where homicide rates hit a record high in 2020 and are on pace to do the same this year, Rodney’s death happened at a time when teens have more access to weapons and are dealing with the destabilizing effects of the pandemic.

The owners of a highly contested power line through southwestern Wisconsin are seeking a new permit after discovering a former regulator who approved the project exchanged encrypted messages with utility employees, potentially tainting the project’s approval. American Transmission Co. and ITC Midwest filed a request Monday with the Public Service Commission to rescind the permit for the $492 million Cardinal-Hickory Creek transmission line and reopen the proceedings “to consider next steps.”

The village of Ephraim in Door County, Wis., is seen in October 2016. Credit: Courtesy of Tad Dukehart

In a community funded by tourism and affluence, much of Door County’s year-round and seasonal workforce is struggling to live comfortably. Resorts, seasonal rentals and second or third homes dominate the land, but without more affordable housing, the county could lose many of its employees. According to a 2019 study by Housing Door County, three of the biggest forces driving the county’s demand for housing since 2010 are job growth; an expansion of tourism, particularly in northern Door County; and a heightened interest in second homes, especially for people in their 50s or 60s whose household income is higher than the national median.

In one of the biggest moments of U.S. Sen. Ron Johnson’s political career, as a pandemic-weary nation looked on, he called his star witness, a doctor with a claim that, if true, might be the biggest medical breakthrough of the 21st century. Pierre Kory made a stunning guarantee before Johnson’s U.S. Senate committee in December: An old cheap drug used to treat parasitic worms was a “miracle cure” for COVID-19. “It basically obliterates transmission of the virus,” Kory said. “If you take it, you will not get sick.” But the truth was far less clear: While the drug has shown promise, there is little rigorous evidence that it works. Kory’s claim that a lifesaving treatment was being ignored by the medical establishment is just one example of how Johnson has either embraced extreme pronouncements about medicine and science or made such claims himself.

They joined the Wisconsin Proud Boys looking for brotherhood. They found racism, bullying and antisemitism.

Daniel Berry says he was searching for camaraderie. The 40-year-old Army veteran yearned to forge the sort of bonds he had in the military: a brotherhood of like-minded men watching one another’s backs. Last year, Berry said, he remembered a guy at the local Veterans of Foreign Wars hall asking him if he had heard of the Proud Boys. The group was vocal in its support for then-President Donald Trump, whom Berry had voted for. They called themselves “Western chauvinists” and said they welcomed true men. Berry did some internet searches and sent off an email. Almost immediately, he received a link to an encrypted chat room. And so began Berry’s journey into the dark world of the Wisconsin chapter of the Proud Boys. Berry, along with a member of the Wisconsin Proud Boys and another former recruit, told USA TODAY the group is a den of racism and antisemitism. Moving up within the group, they said, is dependent on sadistically bullying potential members and promoting white supremacist talking points.

Wisconsin Weekly: Milwaukee aims to stop shooting deaths among youth is a post from WisconsinWatch.org, a non-profit investigative news site covering Wisconsin since 2009. Please consider making a contribution to support our journalism.