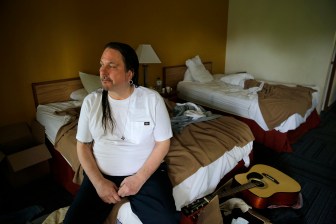 Of note: This week we highlight our investigation revealing how an Outagamie County judge uses a sentencing scheme that requires defendants to stay under his supervision for months — even years — after they are sentenced. It is the first installment of a series, Justice Deferred, which examines the unusual sentencing by Outagamie County Circuit Judge Vincent Biskupic. Over the past seven years in at least 52 cases involving 46 defendants, Biskupic has used “review hearings” to either monitor a defendant’s behavior or to push them to pay fines, fees or restitution, reporters Phoebe Petrovic, Mario Koran, Jack Kelly and Madeline Fuerstenberg found. Biskupic is the state’s top user of this practice, which multiple legal experts described, at best, as a gray area of the law. Some defendants report having to return to court repeatedly under a shifting set of demands and expectations.

After being convicted of bail jumping, Christopher Kartsounes was supervised by Outagamie County Circuit Judge Vincent Biskupic via multiple “review hearings.” After an outburst of frustration at one appearance, Biskupic sent Kartsounes to jail to serve the sentence he had tried to avoid. Had Kartsounes just served his time, he’d have been free more than six months earlier. Kartsounes is pictured here in his room at the Rodeway Inn on May 21, 2021, in Appleton, Wis. Credit: Dan Powers / USA TODAY NETWORK-Wisconsin

‘Why do you keep harassing me?’: An Outagamie County judge controls defendants after sentencing

Chris Kartsounes had heard enough of Outagamie County Circuit Judge Vincent Biskupic’s demands. In May 2017, at his sixth hearing after having already been sentenced — when a case would normally be over — Kartsounes lost his cool. “I’ve served my time. I’ve done everything I’m supposed to do … Why do you keep harassing me?” he asked. After the outburst, Biskupic accused Kartsounes of drinking — a violation of the condition that he remain sober while out of jail. The judge sent him back to the county jail in Appleton, where Kartsounes would serve the remainder of his 12-month sentence. Just like dozens of defendants identified by Wisconsin Watch and WPR whose cases landed in Biskupic’s courtroom, Kartsounes didn’t know when his punishment, and the court’s control over his life, would end.

James Rudd is seen outside of his workplace at the AT&T building in downtown Milwaukee, where he works as a janitor, on July 13, 2021. Rudd is fighting to double the minimum wage in Wisconsin from $7.25 per hour to $15 per hour. Rudd says he now makes more than $15 an hour — and thinks everyone should make at least that. “Fifteen dollars is just a start. We want to take vacations. We want to be able to live the American dream,” he says. Credit: Isaac Wasserman / Wisconsin Watch

Raising Wisconsin’s minimum wage would significantly cut poverty. So why is it still $7.25?

For 26-year-old Olivia McKnight, raising the minimum wage to $15 an hour would transform her life. As a full-time Popeyes employee in Milwaukee, McKnight makes $10 an hour. This isn’t nearly enough to support herself and her three children. She also works a second job. The long work hours have forced her to miss out on time spent with her children. Like others fed up with low earnings, McKnight recently joined the Fight for $15, a global political movement working to increase the minimum wage for all underpaid workers. In Wisconsin, where the racial wealth and income gaps are some of the greatest in the nation, many feel raising the minimum is long overdue. Black women like McKnight are among those who would benefit the most from it.

‘I want to fix it’: Health Commissioner Kirsten Johnson calls Milwaukee’s lead crisis her No. 1 priority

New Milwaukee Health Commissioner Kirsten Johnson said her top priority is tackling the city’s ongoing lead crisis, which she called “the pandemic before the pandemic.” Johnson, who joined the department in March, said although the COVID-19 pandemic remains a challenge, she also wants to begin reversing policies that have worsened health outcomes for the city’s Black and brown residents. This includes the city’s lead abatement program that focuses on removing lead from pipes, paint and soil in the city. Johnson acknowledged the program has had its share of challenges and currently faces new ones as well.

Patrick Neph, owner of Republic Chophouse in downtown Green Bay, Wis., poses at the restaurant’s bar. Neph has struggled to find enough workers to fully staff the business and a second restaurant, Mangiare, which he is readying to open just down the street. Credit: Samantha Madar / Green Bay Press-Gazette

Patrick Neph has had to limit reservations at his Green Bay steakhouse because he doesn’t have enough staff. Neph owns Republic Chophouse and the soon-to-open Mangiare, an Italian restaurant just down the street. Between the two eateries, he needs to hire 10 to 15 more employees. But ever since he had to shut down Republic Chophouse in March 2020 for eight weeks due to the COVID-19 pandemic, he has struggled to find employees. Some nights, he only has five servers when usually he would have more than 10. Across Wisconsin, employers say finding workers is their number one headache. The struggle existed before the COVID-19 pandemic, but the problem has intensified as the U.S. economy roars back to life.

Previously from Wisconsin Watch: ‘We aren’t a bunch of lazy people’: Rejoining workforce isn’t easy for some who lost jobs to COVID-19

Top U.S. Catholic Church official resigns after cellphone data used to track him on Grindr and to gay bars

The top administrator of the U.S. Conference of Catholic Bishops resigned after a Catholic media site told the conference it had access to cellphone data that appeared to show he was a regular user of Grindr, the queer dating app, and frequented gay bars. Some privacy experts said that they couldn’t recall other instances of phone data being de-anonymized and reported publicly, but that it’s not illegal and will likely happen more as people come to understand what data is available about others. Monsignor Jeffrey Burrill, a priest from La Crosse, Wisconsin, has since last fall been the general secretary of the USCCB, a position that coordinates all administrative work and planning for the conference, which is the country’s network for Catholic bishops.

Wisconsin Weekly: How a Wisconsin judge controls defendants after sentencing is a post from WisconsinWatch.org, a non-profit investigative news site covering Wisconsin since 2009. Please consider making a contribution to support our journalism.