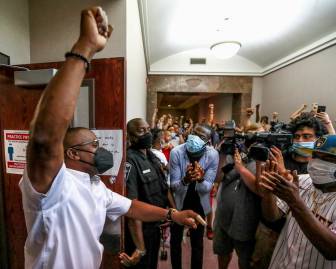 Of note: This week we highlight a story by Madison365 and the Wausau Pilot & Review, which examined the pandemic-related policies that curbed crowding in some jails and prisons in Wisconsin — and whether those moves should continue as fears over COVID-19 spread subside. The story focuses on efforts to incarcerate fewer people when they violate parole and probation rules — which in the past would have landed them back behind bars.

Kevin Carr, secretary of the Wisconsin Department of Corrections, says his agency during the pandemic instructed parole and probation officers to incarcerate only those violators who posed a risk to the public. “You can assess the nature of the contact and determine that there’s no reason to hold that person in custody for three days or more, disrupt their lives, put their jobs and housing at risk,” he says. He is seen during an interview with Wisconsin Watch at the department’s headquarters in Madison, Wis., on June 19, 2019. Credit: Alisa Ivanitskaya / Wisconsin Watch

Incarceration after COVID: how the pandemic could permanently change jails and prisons

Even before COVID-19 began to snake through Wisconsin’s jails and prisons, Chad Billeb saw a storm coming. As chief deputy for the Marathon County Sheriff’s Department, Billeb was already studying ways to reduce the number of inmates in the jail. It’s a challenge that gained new urgency with the arrival of the pandemic. A similar story played out in jails and prisons across Wisconsin and the country, triggering experiments in public health and criminal justice. Combined, Wisconsin’s state prisons and local jails held fewer than 30,000 inmates in December 2020 — the lowest number in more than 20 years.

Beau Jammes was charged with repeat offenses of resisting an officer and disorderly conduct. He filed a federal lawsuit against Outagamie County Circuit Judge Vincent Biskupic claiming a “de facto probation” placed on him through a stay was illegal and cost him lost wages, employment and housing, along with “mental stress” and “pain and suffering.” That suit was dismissed. Jammes poses for a portrait in Columbia, Tenn., on June 24, 2021. Credit: Michael Christen for Wisconsin Watch

Beau Jammes sat inside Dodge Correctional Institution, a maximum security prison in Waupun, Wisconsin. It was late March 2018, and he was 25 years old. Jammes looked at the form before him, picked up a pen and began to write: “Judge Vincent R Biskupic unlawfully stayed a portion of my jail sentence for 19 months,” stated the complaint to the U.S. District Court for the Eastern District of Wisconsin. Jammes’ case was among 31 such cases between 2014 and 2020 in which a Wisconsin Watch investigation found Biskupic offered to stay or furlough defendants’ jail time if they complied with his conditions. Some legal experts questioned whether the practice is lawful.

After years of high water levels that induced floods, portions of the Mississippi River have now swung to unusually low flows, an extreme shift scientists say is likely caused by climate change. River levels are low in northern Minnesota, causing a lower flow in the river all the way to northern Illinois. A lack of rain fueled by changing climate is likely to blame for the interruption. In the future, climate change is likely to cause more dry conditions throughout the region of Minnesota and Wisconsin. The heavy rains will shift further north into Canada, leaving the area with a climate that looks more like the southern U.S.

Jay Anderson Sr. rejoices with supporters after Judge Glenn H. Yamahiro announced Wednesday that there is probable cause to charge former Wauwatosa Police officer Joseph Mensah in the 2016 shooting of Jay Anderson Jr. The family has been waiting five years for this moment. Credit: Ebony Cox / Milwaukee Journal Sentinel

A Milwaukee County judge announced Wednesday that he has found probable cause to charge former Wauwatosa Police Officer Joseph Mensah in the 2016 fatal shooting of Jay Anderson Jr. “This decision has not been taken lightly, nor was it predetermined,”  Milwaukee County Circuit Judge Glenn Yamahiro said. The decision came more than five years after the shooting, which occurred June 23, 2016, at Madison Park in Wauwatosa. At the time, the Milwaukee County District Attorney’s Office ruled the shooting justified self-defense. “Based upon the totality of circumstances, the court does find probable cause that Officer Joseph Mensah operated a weapon, in a matter constituting criminal negligence, and in so doing, caused the death of Jay Anderson Jr.,” Yamahiro said.

In other news related to alleged police conduct: Defense counsel in drug trial claims that testimony does not match evidence

Products spring out from the walls of Veracruz Mexican market in Monroe, Wisconsin: packets of cinnamon sticks, nuts, seeds, herbs, spices, tiny rainbow-colored sprinkles, chicle; a wall of healthcare like anxiety pills and vitamins for energy, and a shelf devoted entirely to various forms of muscle pain relief. And rosquillas, a treat in between a cracker and a cookie which is what newly arrived immigrants ask for most often, says Maribel Lobato. She and her husband Santos Tinoco have owned the store for 13 years in Monroe, a small city in Green County about 40 miles south of Madison. The couple are often first contact for an increasing number of Latinos who immigrate to Monroe — which is 95% white — to work on dairy farms. “We can see the new faces because we know all the Latinos in Monroe,” says Lobato.

Previously from Wisconsin Watch: How undocumented immigrants became the backbone of dairies — and how to keep the milk flowing in America’s Dairyland