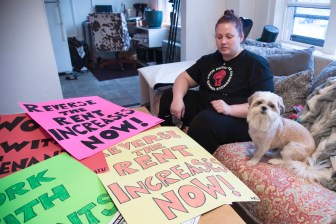 Freda Young had to move quickly in November. A dispute with her upstairs neighbor made staying in her home unsafe, she said. The Milwaukee woman was juggling moving and caring for her daughter, who suffers from seizures. Three months had passed without an update on the status of her application for thousands of dollars in rental assistance. Young was terrified she and her two children would be left homeless.

A couple who asked to be identified as Ester and Jose Pérez because they lack permission to be in the United States also waited months to learn whether their request for assistance under a pandemic relief program was granted. They wondered: Should they reapply in hopes of a better chance at getting help?

Heather Hanson applied in April for the second round of rental assistance that the federal government released. After not hearing back for months, she brainstormed other ways to help pay her rent.

These are but a handful of Milwaukee County residents interviewed by News414 — a service journalism collaboration between Milwaukee Neighborhood News Service and Wisconsin Watch —  who are struggling to navigate rental assistance programs offered through Milwaukee County and the city of Milwaukee.

Statewide, rental assistance disbursement is handled through the Wisconsin Community Action Program Association (WISCAP), 13 of its regional agencies and Energy Services Inc. From March through late June, the state program distributed almost $35 million in federal funds to just over 10,000 households — of the $322 million available from the federal government that must be disbursed by the Sept. 30, 2025 deadline. The program, which Gov. Tony Evers launched in February, does not require that recipients have legal residency in the United States.

The city of Milwaukee and Milwaukee County run their own housing assistance programs financed in part by the federal government. They collectively received more than $32.5 million in the latest federal package to help tenants struggling with rent. Brown, Dane and Waukesha counties also run separate aid programs, as does the city of Madison.

Related story: How to get rental assistance in Wisconsin

Community Advocates, which provides rental assistance to Milwaukee and Waukesha counties, says it has yet to tap the latest batch of federal funds as it works with county and state officials to secure leftover dollars from an earlier round of pandemic relief that expires sooner. Securing those funds will allow Community Advocates to serve additional renters in Milwaukee, where the need will remain incredibly high, explained Deborah Heffner, the agency’s housing strategy director.

The Social Development Commission (SDC), which began disbursing its latest round of aid in May, said it had sent about $4.1 million to 1,036 Milwaukee households as of July 9. Community Advocates since March 1 has distributed more than $10.8 million to 3,700 Milwaukee County households and nearly $1.3 million to 360 households in Waukesha County.

Brad Paul, WISCAP’s executive director, said his agency will ensure that all federal dollars  provided to the state to help Wisconsin renters is disbursed.

“Housing insecurity remains a serious issue in Wisconsin, so unless, or until we solve that, the money will continue to serve a critical need right up to the deadline,” Paul wrote in an email.

George Hinton, CEO of SDC, blames delays in processing applications on the slow appointment of his agency as the citywide agency. Renters flooded the group with inquiries after learning that Milwaukee had funds for another round of assistance  — but before SDC was set up to take applications, creating a long waiting list. Hinton believes SDC is making progress and aims to start distributing $1 million in aid each week. Heffner says her agency is processing applications from Milwaukee County as quickly as possible.

The assistance comes at a critical time. A nationwide U.S. Centers for Disease Control and Prevention moratorium on certain evictions is set to expire on July 31. That means potential hardship for millions of struggling renters across the country.

With long lines for rental assistance and the growing tide of evictions looming, some renters are questioning how Milwaukee County and the city will keep thousands of residents afloat.

Young, who works as a medical assistant for Froedtert Menomonee Falls Hospital and lives with her two teenage children, applied for rental assistance back in November to cover the costs of being furloughed and renting another apartment in West Allis. She said she felt unsafe in her previous home.

While her new landlord readily agreed to accept the first month’s rent and security deposit through Community Advocates, payments were delayed. Young did not know why it was taking so long to get the assistance. Young’s landlord didn’t receive payments until January.

“It was hard — that’s why some people are skeptical about taking payments from Community Advocates, because they feel like it’s going to be a long time or they’re not going to get paid at all,” Young said.

The moratorium, which was established nine months ago, protects renters, who expect to earn less than $99,000 in income this year (or less than $198,000 if filing a joint tax return) and are behind on rent due to the pandemic and sign an affidavit. Tenants must attest that they have sought rental assistance and, if evicted, would likely become homeless or would be forced to live in close quarters with other people. In all, Congress has sent out $46.5 billion in two waves of funding to the states to help renters stay in their homes.

Despite the moratorium, Milwaukee County has seen hundreds of eviction filings each month. Between March 1 and July 8, there were 2,270 evictions filed and judgments in 56 cases — with more than a dozen judgements involving multiple tenants. But the numbers remain far below pre-moratorium levels.

“Moving into 2021, not only do you see sort of a reduction in filings, but you also see a reduction in essentially, how many evictions are actually resolved with a judgment for eviction,” explained Branden DuPont, a data analyst at the Medical College of Wisconsin which runs the Milwaukee Evictions Tracker.

A “for rent” sign is seen outside of a home on Griffin Street in Milwaukee on June 29, 2021. Several renters say they are struggling to navigate federally funded rental assistance programs offered through Milwaukee County and the city of Milwaukee. Credit: Isaac Wasserman / Wisconsin Watch

Many ascribe the downturn to the many efforts to prevent evictions, either through rental assistance or mediation provided by service agencies. Renters fear the end of the moratorium will hasten eviction filings and spur more landlords to knock at their doors demanding overdue rent.

“There’s a tsunami of evictions coming,” said Amara Lang, a member of the Milwaukee Autonomous Tenants Union — an all-volunteer organization fighting to end housing insecurity. “There’s gonna be a massive reckoning in this nation with a housing crisis.”

“There are already evictions filed waiting for this to expire. I don’t think the city is prepared,” Lang added.

The Pérezes, who live with their three young daughters and her parents, never heard back about an application they submitted in November to SDC. But due to the agency exhausting previous rounds of money and a waiting list that surged to about 4,000 people in November, Hinton suggested their application likely was not processed and they would have to reapply to the new round of rental assistance.

The Pérezes fell into financial trouble when COVID-19 hit. Ester Pérez lost her job after the school where she worked shut down. Her husband’s hours at a restaurant were also reduced. Jose Pérez had to take on extra part-time jobs doing cleaning and working outside to make enough money to get by.

After News414 and Wisconsin Watch interviewed Hinton and notified him of the Pérezes’ case — and the couple also called the agency — they were told that they would shortly receive a new application and a phone call regarding their request.

“I hope they don’t take too long,” Ester Pérez wrote in a text message.

In April 2020, Karianne, who asked that her last name be withheld, was facing an eviction. She applied for rental assistance through SDC, Community Advocates and a formerly federally financed rental assistance program through Hope House of Milwaukee. She said she didn’t hear back from any of them, despite numerous attempts to contact the agencies. Karianne was ultimately served with an eviction notice and had to go to court to stay in her home.

“There are so many people that need help right now, unfortunately. And I think it’s just a matter of the system is just so backlogged, and so they’re just drowning right now,” said Karianne, who now volunteers with the Milwaukee Autonomous Tenants Union.

From left, Milwaukee Autonomous Tenants Union members Maher, Karianne and Amara Lang are seen in Milwaukee alongside signs they brought to a protest against a landlord who recently raised rent. Maher and Karianne asked that their last names not be used. While facing eviction in April, Karianne applied for multiple rental assistance programs but did not hear back. Photo taken June 24, 2021. Credit: Will Cioci / Wisconsin Watch

Community Advocates says its turnaround time for applications to be processed is between 21 and 30 days. But that does not include the time between residents submitting their applications and contact from a case manager to begin processing the request. For Hanson, the delay pushed her to the edge financially.

Hanson lives with her two daughters in South Milwaukee. She applied for rental assistance through Community Advocates at the end of April. While she has kept her bills and expenses to the bare minimum, she was forced to consider taking on a part-time job to make ends meet. But with homeschooling her children and working a full-time job already, it didn’t seem feasible.

“I couldn’t work a part-time job and then be able to help them with their homework,” Hanson said. “I was trying to think of another solution, but I think just working Saturday and Sunday would not have been enough to cover it. And then I would never have had time with the kids.”

In June, Community Advocates finally notified her that she was eligible and needed only to provide a little more documentation to start the process. Hanson hopes it won’t take long.

“Our goal right now is just to make sure that we review everyone in the portal,” Heffner said. “We’re just trying to work through the applications as much as possible and look at any bottlenecks and address anyone that, for one reason or another, they’re still in queue.”

The nonprofit Wisconsin Watch (www.WisconsinWatch.org) collaborates with WPR, Wisconsin PBS, other news media and the University of Wisconsin-Madison School of Journalism and Mass Communication. All works created, published, posted or disseminated by Wisconsin Watch do not necessarily reflect the views or opinions of UW-Madison or any of its affiliates.