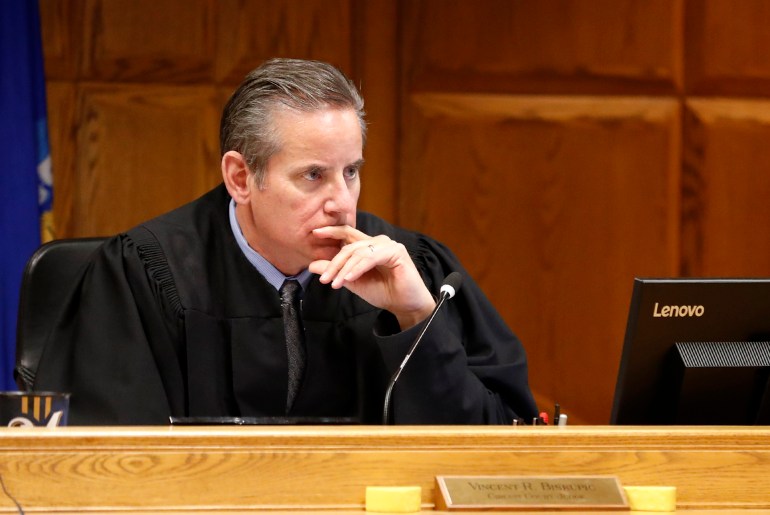 How did Wisconsin Watch and WPR confirm that Outagamie County Circuit Judge Vincent Biskupic is among few Wisconsin judges who regularly order defendants to open sentences — leaving some in limbo as he repeatedly called them back to court? That required a painstaking data analysis.

Cases in which a person pleaded guilty or was found guilty at trial on at least one count of their charges. Cases featuring a “probation review hearing,” “review” or “review hearing” after sentencing — or sentencing after probation was revoked.Cases prosecuted between Jan. 1, 2014 through Jan. 1 of this year — to cover most of Biskupic’s time in office.

Related content:
‘Why do you keep harassing me?’: An Outagamie County judge controls defendants after sentencing

Biskupic oversaw 2,189 cases involving at least one conviction during that period, the data firm found. Eliminating cases that had no “probation review hearing,” “review” or “review hearing” listed in their dockets whittled the list to 142 cases. CDT sorted those cases into four categories:

In these cases, Biskupic held “probation review hearings,” “reviews” or “review hearings” for defendants whom the Department of Corrections, which oversees probation in Wisconsin, did not actively monitor. Reporters eliminated cases in the last two categories because an initial imprecise records sweep included some cases featuring review hearings while someone was still serving probation.

Next, reporters scrutinized each case to determine whether they included other conditions that would make Biskupic’s sentencing practices typical. That involved reviewing case dockets using the state’s Consolidated Court Automation Programs database and spending more than 20 hours reviewing case records at the Outagamie County Government Center.

Further refining the data, reporters eliminated cases involving post-conviction hearings related to enforcing victim impact panel attendance, which state law clearly authorizes. Records obtained at the county government center — costing $1.25 per page — indicated that some of Biskupic’s “review hearings” dealt with requests for work release privileges or appeals. Reporters eliminated those from the data set, since they did not pertain to the types of review hearings in question.

That left 52 unique cases in which Biskupic utilized uncommon, open-ended sentences. These fell into several categories:

The 52 cases involved 46 different defendants and resulted in 199 review hearings.

The judge who held the second-most review hearings for similar defendants presided over no more than 67 hearings, according to the data firm’s analysis. And the true total may be lower, since a case-by-case review of the statewide data would likely eliminate additional cases in which review hearings were held for common reasons — as Wisconsin Watch and WPR found when scrutinizing each Biskupic case.

Behind the story: How we reported on a judge’s unusual sentencing practices is a post from WisconsinWatch.org, a non-profit investigative news site covering Wisconsin since 2009. Please consider making a contribution to support our journalism.