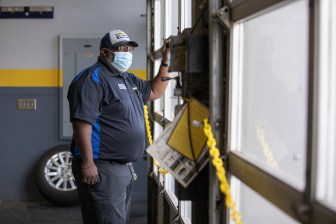 Of note: This week we feature the latest installment in Wisconsin Watch’s Color of Money series, which explores why Wisconsin’s Black residents own less, earn less and owe more on average than whites — and what can be done about it. This story features  Greg Lewis, a prospective Black homeowner in Milwaukee whose dreams of buying his own home were thwarted after the appraisal, or valuation of the property, was much lower than he expected — meaning banks would be limited in how much they could lend him. He blames the difference on racism. And he is not alone. Experts and some homeowners say historic racism continues to play a role in depressing the value of Black-owned homes, especially in majority-Black neighborhoods. Lewis’ experience is just one example illustrating why Milwaukee’s homeownership rate among Black residents is so low.

Greg Lewis, who manages a Goodyear tire store in Brookfield, Wis., has tried since January to buy a house in several Milwaukee neighborhoods. He temporarily gave up in late April after repeatedly getting outbid. Particularly disappointing: when he lost the chance to buy a two-bedroom Hampton Heights neighborhood home after a surprisingly low appraisal reduced how much a bank would be willing to lend. He is still working with a real estate agent to eventually buy a house someday. Photo taken April 30, 2021. Credit: Coburn Dukehart / Wisconsin Watch

Homeownership gap for people of color in Wisconsin is wide; communities, nonprofits try to close it

Myriad factors underlie the stark fact that just 26% of Black residents of Wisconsin own homes — compared to 72% of whites. These barriers include historic discrimination in the form of “redlining” and housing covenants that barred property owners from selling to Black residents. Modern-day realities — including Black family wealth that is one-tenth that of white families — also keep many African-American households in Wisconsin from achieving homeownership.

Inside one city: Milwaukee residents dissatisfied with police amid a nationwide reckoning

Amid a reckoning over law enforcement that is roiling the nation, Milwaukee residents by nearly 2-1 give low ratings to the city’s police department, a new Suffolk University/USA TODAY Network Poll finds. The survey, the first in a series in major American cities, explores attitudes toward law enforcement at a critical moment. Cellphone footage of George Floyd being killed last spring by a Minneapolis police officer, and a string of other videos showing deadly police action against Black Americans, have fueled outrage and upheaval across the country.  In Milwaukee, 61% assess their performance as fair or poor. The assessment among Black residents is particularly harsh: Just 1% say the department is doing an “excellent” job.

With hundreds of millions of federal dollars flowing into Milwaukee, the city is facing a historic opportunity to make headway on removing lead paint and pipes. “This is an opportunity for us to address lead in the largest way we’ve ever been able to,” city Grants Director Steven Mahan said of lead paint during a virtual town hall last month. The city has been allocated $394.2 million in federal funds from the American Rescue Plan Act, and local officials hope to see more land in city coffers from the infrastructure bill that the White House is trying to maneuver toward the finish line. Mayor Tom Barrett has proposed prioritizing lead paint remediation with the funds the city has already been allocated and said his preference would be to address lead laterals using infrastructure funds.

The emergency entrance of Froedtert Hospital in Milwaukee, is seen on Nov. 1, 2019. Johns Hopkins University researchers told ProPublica that they identified at least 16 U.S. medical institutions that pursued lawsuits, wage garnishments and liens against their patients in the first seven months of 2020 — a time when many hospitals dramatically reduced aggressive tactics to collect medical debt. Researchers said they could not determine all of the amounts sought by the 16 institutions taking legal action in the first half of 2020, but of those they could, Froedtert Health, a Wisconsin health system, sought the most money from patients — more than $3 million. Credit: Corrinne Hess / WPR

Some hospitals kept suing patients over medical debt through the pandemic

ProPublica reports that hospitals’ use of court actions to collect patient debt dropped sharply during the pandemic. But some of the nation’s largest healthcare systems kept suing — and most were nonprofits. That includes Froedtert Health, a Wisconsin health system that sought the most money from patients through various types of litigation — more than $3 million. The story builds on previous award-winning reporting by Bram Sable-Smith, who revealed that Wisconsin hospitals including Froedert were continuing to file hundreds of legal actions during the pandemic to recover debt from their patients.

Several former WDVA employees said they felt the department didn’t understand the dynamics of what it took to help a desperate veteran in real time, and did not trust employees to make the best decisions in the field. Credit: Ruthie Hauge / Cap Times

‘Unequal treatment’: Employees of color say they were marginalized at the Wisconsin Department of Veterans Affairs

Tiffany Koehler loved her job working with women veterans at the Wisconsin Department of Veterans Affairs. As a Black woman who served in the Army, bringing women together across the state was a mission she was driven to pursue. The role initially provided for her to work remotely. When Gov. Tony Evers took office in 2019 and the agency’s leadership changed, so did Koehler’s supervisor. She required Koehler to work in Madison and, Koehler alleges, did not make a reasonable accommodation for her ongoing medical appointments for cancer. “WDVA became the most toxic and hostile place I had ever worked,” said Koehler, who was fired. “As a state agency, I expected a level of fairness and concern for their staff.”

Wisconsin Weekly: People of color in Wisconsin face barriers to homeownership is a post from WisconsinWatch.org, a non-profit investigative news site covering Wisconsin since 2009. Please consider making a contribution to support our journalism.