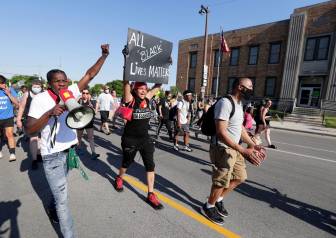 Of note: The evidence continues to mount that dairy farms are to blame for tainted drinking water in Kewaunee County. Wisconsin Watch’s Coburn Dukehart reports on two new federal studies released this week that point to cows — and how their manure is handled — as prime causes of acute gastrointestinal illness in the county. In the past, some of the illness and tainted drinking water have been blamed on septic systems. But the two studies say most of the contamination and illness is tied to the waste generated by the dairy industry in Kewaunee County, where cows outnumber people 5 to 1. The findings raise questions about the effectiveness of manure spreading regulations enacted in 2018.

Arlin and Mary Lou Karnopp live near Luxemburg, Wis., on property once owned by Arlin’s great-grandfather. Their house backs up to a field managed by Rolling Hills Dairy farm, where manure is spread. The Karnopps’ well has tested positive for nitrates and coliform over the years, and they no longer drink the water. They are afraid to let their grandchildren play in their yard due to fears over contaminated soil. Photo taken March 29, 2019. Credit: Coburn Dukehart / Wisconsin Watch

The No. 1 factor for acute gastrointestinal illness in Kewaunee County’s private drinking water wells is cow manure, according to a federal study released Wednesday. The findings raise questions about the effectiveness of existing regulations aimed at protecting residents from tainted drinking water. The study predicts that cow manure causes 230 cases of acute gastrointestinal illnesses in the county per year, out of 301 total cases of sickness — with an additional 12 cases caused by human waste from septic systems. The lead author on that study was Tucker Burch, a U.S. Department of Agriculture research agricultural engineer. Also published Wednesday was a companion study by USDA microbiologist Mark Borchardt, which found nitrate and coliform in Kewaunee’s drinking wells mostly comes from agriculture — not human waste from septic systems.

Molly Rodela, of Manitowoc, Wis., prepares dinner in her apartment. Rodela and her husband, Hector, have an accepted offer on a house in Manitowoc that was $20,000 more than the owner’s asking price. Offers over the asking price have become commonplace in a housing market that is marked by tight supply and growing demand. Credit: Gary C. Klein / Sheboygan Press

Molly Rodela can’t wait to leave the two-bedroom Manitowoc apartment she, her husband, Hector, and their daughters have shared for more than five years. The couple searched for years for a bigger place to raise their two kids, but they were not approved for a mortgage loan when they first started house-hunting in 2016. The story behind how they finally got their three-bedroom, two-bathroom Manitowoc home illustrates the many challenges facing prospective home buyers in northeastern Wisconsin, where a competitive housing market, sluggish pace of new housing development, high prices and older homeowners aging in place have made it hard to find — and buy — a house.

The Mendota Juvenile Treatment Center, located on Madison’s north side, is slated for expansion under Act 185, but state lawmakers didn’t give officials at the facility the go-ahead to spend money until last month. Credit: Ruthie Hauge / Cap Times

Three years ago, following a Milwaukee Journal Sentinel investigation that uncovered allegations of inmate abuse and unsafe working conditions over several years at Lincoln Hills and Copper Lake youth prisons, Wisconsin lawmakers of both parties were unequivocal and united across party lines in their demands that the facilities were beyond repair and needed to be closed — and that the state’s approach to youth justice must be overhauled. Rep. Michael Schraa, R-Oshkosh, praised his colleagues on the Assembly floor just before the vote. But in the three-and-a-half years since that moment, politics and partisanship returned to the process and the state repeatedly failed to carry out measures spelled out in the law.

“Employees are made to work around other sick employees,” a complaint to the U.S. Department of Labor about a Madison laundry service read in December. “Employees are allowed to come to work with COVID-19 symptoms.” It’s one of nearly 400 COVID-related complaints filed with the federal government from October through mid-March in Wisconsin, in records released to News 3 Investigates that detail one of the more complete pictures of COVID concerns in workplaces available in the state. “Too many frontline workers were exposed to COVID needlessly,” Wisconsin AFL-CIO president Stephanie Bloomingdale said. “This pandemic showed a light on so many things that are wrong in our workplaces.”

A new poll exploring Milwaukee residents’ attitudes toward law enforcement shows that a majority oppose defunding the police — but a similar number say they would support cutting funds from cops to spend on social services like mental health care. The results illustrate the nuances in the public’s perception of police and the difficulty of defining “defund the police,” said Marquette University polling expert Charles Franklin. “With complicated policy issues, especially new ones that have just burst onto the scene, how much information you provide in the question and how much you frame the question matters, potentially quite a lot,” Franklin said. According to Franklin, the Milwaukee survey tracks with state and national polling that shows that the general public generally feels positive about law enforcement, despite recognizing flaws and severe misconduct in policing.

Wisconsin Weekly: Manure at center of Kewaunee County drinking water problems is a post from WisconsinWatch.org, a non-profit investigative news site covering Wisconsin since 2009. Please consider making a contribution to support our journalism.