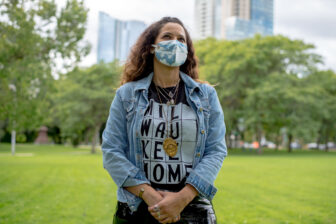 This piece was produced for the NEW News Lab, a local news collaboration in Northeast Wisconsin. A version of this story first appeared on Madison365.

In 2019, with Brookshire and others at the helm, Milwaukee County became one of the nation’s first jurisdictions to declare racism a public health crisis. Since then, more than 170 jurisdictions across the country have followed suit, including the Wisconsin cities of Milwaukee, Madison, Green Bay — as well as Dane County.

Brown County is now joining that list. In February, the County Board declared racism a public health crisis and established a Racial Equity Ad Hoc Committee, which convened for the first time in April. The declaration came after a tumultuous summer of protest swept the nation. Now, Brown County is looking to bring change to its communities by modeling its work after similar declarations made in places like Milwaukee.

“I hope to focus on some of the institutional ways that the county as an organization can undergo transformational change to decrease racial disparities,” said County Supervisor Amanda Chu, a member of Brown County’s racial equity committee.

In 2019, Milwaukee County set out to achieve a simple goal: to make it the healthiest county in the state. To make that happen, the county began pursuing three strategic focus areas to address racial inequality and extreme health and economic disparities. Those focus points include creating intentional inclusion, bridging the gaps in health care and other silos throughout the county and investing in equity.

Former Director-at-Large Lilliann Paine of the the nonprofit Wisconsin Public Health Association helped push through the declaration that racism is a public health crisis in Wisconsin in 2018.

The initial declaration in Wisconsin that racism is a public health crisis came from outside the government: the nonprofit Wisconsin Public Health Association (WPHA) made that declaration in May 2018. Former Director-at-Large Lilliann Paine pushed that declaration through, which eventually made a path for both Milwaukee County and the city of Milwaukee to do the same in May and July 2019, respectively.

As a longtime student of public health and a Milwaukee native, Paine’s decision to tackle racism head-on was easy.

“When you opt into public health you don’t get to opt out of leadership,” she said in an interview.

In Wisconsin, extreme racial disparities have caused negative health outcomes for many Black and brown communities. Wisconsin is the fourth worst in the nation for both infant mortality and child poverty among Black residents, according to a 2019 report by COWS, a nonprofit think tank based at the University of Wisconsin-Madison. Wisconsin also ranks worst in the nation for racial disparities in unemployment.

A 2019 study by 24/7 Wall St, a financial news and analysis company, ranked Milwaukee the worst place in the country for Black residents. In Milwaukee, 1,020 in every 100,000 Black residents die each year — 300 more deaths per 100,000 deaths among white residents, according to that firm’s report.

“I wanted to address those gaps in health outcomes,” said Paine, now the director of technical assistance and business development for the National Birth Equity Collaborative. “Differences in ways we access health, quality of health and where we work, live and play, and what that means for our life course, from the cradle to the grave.”

For WPHA, the journey to equity began within. UBUNTU Research and Evaluation — a Black women-led consulting firm for education, policy and advocacy —  conducted a study on racial equity, policy and procedures within WPHA.

The study defines racism as a “permanent aspect of society.” UBUNTU’s report explains that whiteness and racism impact organizations and the public that they serve.

Prior to joining WPHA, Paine served as a health and well-being educator for the UW-Extension. It was through that work that she realized how targeting public health officials could effectively change the culture and standards of public health in Wisconsin.

“Those key players, those public health officials, could influence how another generation (is) brought up in those systems,” she said.

As one of the primary authors of WPHA’s resolution, Paine drew inspiration from Dr. Camara Jones, the former American Public Health Association president. Jones launched a National Campaign Against Racism in 2015, which set the stage for the wave of public declarations against racism that followed.

Dr. Jeanette Kowalik was the health commissioner for the city of Milwaukee until September 2020, when she resigned citing racism and sexism on the job and the exhaustion of fighting misinformation about COVID-19. Kowalik is seen at Juneau Park in Milwaukee on Sept. 18, 2020. Credit: Will Cioci / Wisconsin Watch

WPHA’s resolution defines the word “crisis” as a problem affecting a large number of people, threatening health over a long period of time and requiring large-scale solutions. Former Milwaukee Health Commissioner Dr. Jeanette Kowalik said choosing the word “crisis” was very important — a word that speaks to the chronic nature of the problems at hand.

“Racism is so embedded into our systems and practices and policies here in the United States. That’s why we (say) crisis,” said Kowalik, who worked with the WPHA and Milwaukee County to draft a city-wide resolution that declared racism as a public health crisis in July 2019.

“(These) declarations demonstrate the importance of not only acknowledging historical injustices, but also clearly defining steps towards dismantling structural harm,” Paine said.

Brookshire and Kowalik said growing demands for action against inequality and having WPHA’s resolution as template spurred momentum for change in the Milwaukee area. Brookshire and her team developed a racial equity training series for 3,000-plus staff and supported institutional change when designing the local racial equity ordinance. The Office of African American Affairs also offered county-wide guidance on how to address race-related incidents of violence. And when the COVID-19 pandemic set in, the office focused on outreach to the community.

“We really shifted gears to go into community drive awareness and communication, and then lift up the needs that are aligned (with) COVID,” Brookshire said.

At the city level, Kowalik and former Deputy Commissioner Griselle Torres developed an anti-racism plan for Milwaukee’s health department. This work also created a path for an anti-racism approach to the city’s pandemic response.

“The city created a mask ordinance in July of last year. And the mask ordinance was developed with equity in mind,” said Kowalik, now the director of policy development at Trust for America’s Health in Washington, D.C. “Like the police department isn’t even listed as an enforcer (on the ordinance), because there were issues with the state’s Safer at Home (order). The police were issuing more citations for people of color.”

The pandemic, combined with the racial justice protests of 2020, created a lane for accountability and progress unlike Wisconsin had seen before. For Kowalik, it also highlighted the need for relationship building between the community and government.

“We were able to pivot or redirect funds to community organizations and small businesses in a reasonable timeframe for the government.”

However, none of the declarations that led to this action came without pushback. From disapproving emails from residents to troubles connecting with colleagues over the severity of the issues at hand, tackling racism head-on through public declaration and accountability was no small task.

“It’s a heavy lift,” said Brookshire, who is now CEO of Brookshire Customized Solutions, a national management and leadership consulting firm. “You have to look at the data. You have to (uplift) the voice of people. And you have to drive accountability by shaping who makes those decisions and who continues to be invited to the table.”

For those working on Brown County’s Racial Equity Ad Hoc Committee, Brookshire has a word of advice: “Go big or go home.”

Brown County gets to work

With more than 200,000 residents, Brown County is Wisconsin’s fourth-largest county. In 2019, the majority-white county was 3.4% Asian, 3.4% American Indian, 3% Black and 9% Hispanic/Latino, according to Census data.

In 2019, with Nicole Brookshire and others at the helm, Milwaukee County became one of the nation’s first jurisdictions to declare racism a public health crisis. For those working on Brown County’s Racial Equity Ad Hoc Committee, Brookshire has a word of advice: “Go big or go home.” Credit: Courtesy of Nicole Brookshire

In August 2020, Green Bay partnered with Wello, a local nonprofit organization centered on health and well-being, to pass its own declaration on racism as a public health crisis.

A 2018 Aurora BayCare Medical Center study found stark racial disparities in Brown County. In 2015, the infant mortality rate for Black people in Brown County was 13.6 per every 1,000 births, more than two times higher than the statewide rate of 5.7 deaths per 1,000.

Brown County’s racial equity committee is meeting monthly and has two years to craft recommendations for the County Board.

Committee members tout support from the board and the community. But some residents oppose the efforts.

During the group’s May meeting, County Supervisor Joan Brusky read a letter from a constituent who called the effort “immoral, tyrannical and impossible to achieve.”

“I don’t believe racism is a crisis. It isn’t endemic and America is the least racist place on earth,” the letter said. Brusky said she disagrees with her constituent.

Other residents expressed support at the meeting and pushed the committee to clearly articulate its intentions moving forward.

“I’m here because I’m interested in your goals. What is your goal? What do you hope to accomplish?” said Green Bay East High School’s former principal Ginny Streckenbach. “I want to be a part of that.”

Kynala Phillips is a reporter for Madison365, which produces stories for the NEW News Lab, a local news collaboration in Northeast Wisconsin that includes the nonprofit Wisconsin Watch (wisconsinwatch.org). Wisconsin Watch collaborates with WPR, PBS Wisconsin, other news media and the University of Wisconsin-Madison School of Journalism and Mass Communication. All works created, published, posted or disseminated by Wisconsin Watch do not necessarily reflect the views or opinions of UW-Madison or any of its affiliates.

How Milwaukee County set the stage for tackling racism as a public health crisis is a post from WisconsinWatch.org, a non-profit investigative news site covering Wisconsin since 2009. Please consider making a contribution to support our journalism.