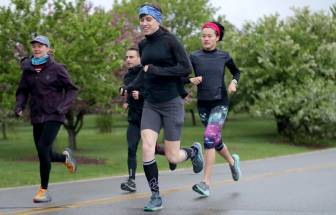 Of note: This week we highlight the Milwaukee Journal Sentinel’s coverage of Republican-backed bills to bar transgender athletes from school sports for girls and women in Wisconsin — part of a national trend of such legislation. High school and collegiate officials say the legislation would directly affect few, if any, athletes, Molly Beck and Tom Dombeck report.

“While supporters say the bills are needed to preserve competitive achievements and scholarships, the state’s transgender community and their advocates call the legislation solutions in search of a problem,” the reporters write. “And they worry the proposals could result in real harm to transgender children and young adults by sending a message that they don’t deserve to live like everyone else.”

Beck and Dombeck asked bill author Rep. Barb Dittrich for examples of transgender athletes in Wisconsin. Her office cited two unnamed athletes who would not be affected by the legislation, the reporters write.

Wisconsin transgender athletes face ban from women’s sports under proposed bills, which would affect few, if any, sports officials say

A pair of bills being advanced by Wisconsin Republicans that bar transgender athletes from participating in school sports for girls and women would directly affect very few — if any — athletes, according to high school and collegiate sports officials. While supporters say the bills are needed to preserve competitive achievements and scholarships, the state’s transgender community and their advocates call the legislation solutions in search of a problem. And they worry the proposals could result in real harm to transgender children and young adults by sending a message that they don’t deserve to live like everyone else.

In a first-person piece, The Intercept’s Robert Mackey explores how conservative videographers have trained their lenses on racial justice protests to create what he says are misleading portrayals of the movement. “As a reporter focused on protest movements, I’ve been studying video of chaotic events at demonstrations for more than a decade, since I live-blogged Iran’s disputed election and then covered the Arab Spring and Occupy protests, from the United States to Brazil. And one thing I’ve learned is that, whether a clip was posted online by a witness in Cairo or Kenosha, it always helps to know who shot the video, and why.”

‘This saves lives’: After losing his dad, cousin and friends to COVID, one man is pushing to get as many people vaccinated as he can

When Travis Timmons, a young adult, came in for his shot, Grennell encouraged him to talk with his peers about being vaccinated. “If you can get a needle to the arm for a tattoo,” Timmons said, “you can get a needle to the arm to get a vaccine and save a life.” Grenell continued like that, one after another, welcoming and encouraging anyone who came through the doors. Grenell lost his father, cousin, brother-in-law and others close to him to the coronavirus, and he had his own fight against COVID-19 after he contracted it at his father’s funeral. He’s seen more than enough suffering, and has made it his mission to do everything he can to make sure others get vaccinated.

The ACLU of Wisconsin has filed a complaint with the Grantsburg School District alleging the principal of the district’s online charter school repeatedly blocked student and staff attempts to form a club for LGBTQ students and allies. The complaint against iForward, a statewide online school that serves 1,200 students across Wisconsin in grades K-12, outlines actions by Principal Constance Quade to block students from forming the club, including the suspension of a sixth-grade student who identifies as LGBTQ, after they distributed materials about the club through online boards and classrooms shared by their peers. In February, Quade was criticized for preventing students from sharing a Black History Month presentation, according to the Milwaukee Journal Sentinel.

In Mattie’s memory: When she couldn’t find clothes to fit her 20-week-old for his burial, this mom knew something had to be done

Little things each day remind Hazel Jones of her son, Mattie. In her apartment, dozens of stuffed and ceramic turtles decorate the walls. Hazel’s husband, Artrell Jones loves the animals and suspects his son would have, too. Other things, like the smell of peaches, red and black butterflies and yellow daisies offer reminders of Mattie, who was delivered stillborn. His burial has stuck with Hazel as she grieves. The baby was only 6 inches long and weighed only 3.5 ounces, so the hospital had no clothes small enough for him to wear. That’s why Hazel decided to help those who have lost children — in Mattie’s memory. This type of support is especially important in Milwaukee, where 10 in every 1,000 pregnancies end in infant mortality, and another seven in every 1,000 end in stillbirth.

Wisconsin Weekly: Wisconsin transgender student athlete proposals would affect few, if any, officials say. is a post from WisconsinWatch.org, a non-profit investigative news site covering Wisconsin since 2009. Please consider making a contribution to support our journalism.