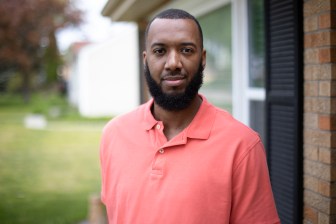 Drown in debt or drop out?; plan to remove PFAS in Marinette OK’d; Catholic priest abusers revealed; Wausau ‘community for all,’ but Marathon County not on board

Of note: This week we highlight the launch of Wisconsin Watch’s Color of Money series, which examines the exclusionary policies and other reasons why Wisconsin’s Black residents own less, earn less and owe more on average than whites — and what can be done to narrow the gap. The series was written by University of Wisconsin-Madison students in an investigative reporting class taught by Wisconsin Watch Managing Editor Dee J. Hall. Reporter Alyssa Huglen found that Black students in Milwaukee and nationwide take on greater debt than white students, have higher default rates and are less likely to earn a degree. “I’ve seen several students who have had to drop out because they might not have had that last little bit of money for tuition or they might have fallen on hard times,” said Victoria Pryor, a student services program manager for UW-Milwaukee’s Black Student Cultural Center. “They may get their degree but still have $40,000 to $50,000 in student loans to repay. That’s the worst thing — to have that much money to pay back, and you still don’t have that degree.”

Clint Myrick is seen at his home in Milwaukee on May 10, 2021. Myrick graduated from the University of Wisconsin-Milwaukee in 2010 with a student loan debt that has since ballooned to over $150,000. Myrick said he understands why so many students take out loans without necessarily knowing how to pay them back. “They sell you on the dream. ‘Just take out the loans, and you’ll get a job where you’ll be able to pay that stuff back!’ You really believe it,” Myrick says. Credit: Coburn Dukehart / Wisconsin Watch

Drop out or drown in debt? Many Black students in Wisconsin face stark choices in paying for college

When Clint Myrick graduated from the University of Wisconsin-Milwaukee in 2010, he left with two consequential pieces of paper: a diploma for a bachelor’s degree in music education — and an eye-popping student loan bill. The Milwaukee native was one of the first in his family to attend college, and Myrick said he entered with little knowledge of how to pay for it. “I was totally unprepared,” Myrick said. “I didn’t know how much it cost.” Over a decade later, Myrick’s student loan debt has only ballooned; interest has pushed the debt to $152,039, the highest it has ever been. In Wisconsin, about 710,000 people owe an estimated $24.4 billion in federal student loan debt, according to Gov. Tony Evers’ 2020 task force on student loan debt. Nationally, the toll of crippling levels of student debt on tens of millions of Americans has prompted some calls for wide-ranging loan forgiveness.

Jeff Lamont, a Marinette, Wis., resident and retired hydrologist, is seen next to a creek where it empties into Lake Michigan’s Green Bay. This creek is the most highly PFAS-contaminated of all the tributaries that empty into the lake based on a recent study funded by The Sea Grant Institute. Sampling occurred at all significant tributaries from the eastern shores of Green Bay at the north end of Door County, Wis., to Escanaba, Mich. Credit: Mike Erhart for The Midwest Center for Investigative Reporting

Wisconsin environmental regulators have signed off on Tyco Fire Products’ plans to treat PFAS contamination in groundwater stemming from its fire training facility in Marinette. The Wisconsin Department of Natural Resources warns the system will reduce, but not eliminate, the so-called forever chemicals in groundwater and surface water over the next 30 years. The contamination is linked to Tyco’s use of firefighting foam that contains PFAS, or perfluoroalkyl and polyfluoroalkyl substances. The Marinette manufacturer conducted testing and training with firefighting foam that contains PFAS at its 380-acre facility from the early 1960s through 2017. Town of Peshtigo residents who live in an area that includes roughly 270 households are receiving a $17.5 million settlement from Tyco after being exposed to the chemicals, which have contaminated private wells.

Earlier from the Midwest Center for Investigative Reporting: ‘The middle of a massive contamination’: Residents of Wisconsin region struggle with aftereffects of dangerous ‘forever chemicals’

The yellow markers show where Society of the Divine Word clerics were credibly accused of having abused children. The reds dots are places where the same priests and brothers served during their careers. The locations of the markers are approximations. Credit: Frank Main, Robert Herguth / Sun Times

In a profile by a community newspaper, Rev. Ronald Lange Lange spoke of his commitment to learning about Ghana while teaching at schools there and leading a Catholic parish with more than a dozen worship sites. “The people are just so happy to see you,” Lange, a member of the Society of the Divine Word’s Chicago province, was quoted as saying. “You don’t even have to be a good priest.” And he wasn’t, as his order now acknowledges. Lange has been credibly accused of sexually abusing children over “multiple years,” the order says another member of the Divine Word order, the Rev. Jefferson Pool, is accused of sexual abuse of children in Ohio in 1977 and in Wisconsin in 1981. Meanwhile, survivors of clergy abuse across Wisconsin are encouraged by a state Department of Justice investigation of allegations dating back decades but say Wisconsin should remove the statute of limitations for civil action in such cases, the Milwaukee Journal Sentinel reports.

Earlier from Wisconsin Watch: ‘I was such a little kid’: As Wisconsin Catholic clergy accused of sexual abuse grows, the trauma lingers

Amid county controversy, Wausau mayor declares the city a “community for all”

By a 6-2 vote, a Marathon County committee voted down a proposed “community for all” resolution that has been in the works for nearly a year. Originally called “No Place for Hate,” the declaration has been revised six times and renamed — all amid sharp criticism from conservative board members and residents who balk at achieving “racial and ethnic equity.” Republican Party of Marathon County Chair Jack Hoogendyk has repeatedly referred to the resolution as Marxist “critical race theory” that threatens individual rights and freedom of speech. Wausau Mayor Katie Rosenberg countered with a move of her own — a proclamation declaring Marathon County’s largest city a “community for all.”