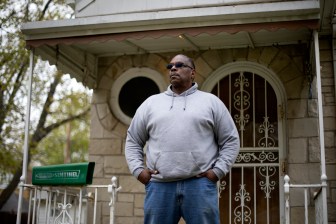 Wisconsin has one of the biggest gaps between white and Black income and wealth in the country. The average household income for a Black family is just over half what a white family earns. Only Minnesota and Louisiana have worse disparities.

And when it comes to family wealth, the gulf is even wider: Nationally, the household net worth for a typical white family is roughly 10 times larger than a Black family’s.

Research shows that Milwaukee is one of the worst major cities in America for Black residents, ranking 50th out of 50 in many indicators of well-being. Marc Levine, a University of Wisconsin-Milwaukee researcher, describes the city as “the archetype of modern day metropolitan racial apartheid and inequality.”

“On virtually all key measures of Black community well-being, Milwaukee ranks at or near the bottom when ranked against other large metropolitan areas,” Levine writes. “Moreover, when we examine historical trends in some key areas, the results are equally grim: Black Milwaukee is generally worse off today than it was 40 or 50 years ago.”

How did we get here? And what can be done to narrow this wealth and income gap — and a declining standard of living for Black residents? Students in a University of Wisconsin-Madison investigative reporting class led by Wisconsin Watch Managing Editor Dee J. Hall delved into these questions for the Color of Money series.

The students explored the historical roots of economic disparities along racial lines in Wisconsin — including policies that for many years excluded Black residents from certain neighborhoods and blocked them from government benefits including Social Security and free college tuition for veterans. The class also examined various proposals to shrink the gap, such as reparations for individuals affected by slavery, and providing universal or basic income.

In addition, the UW-Madison journalism students investigated disparities when it came to home ownership and student debt, hiring discrimination and the economic realities for the formerly incarcerated, who in Wisconsin are disproportionately people of color.

They found many possible solutions to the wealth and income gap. Some of the fixes are very expensive — such as the more than $1 trillion it would cost to erase all student loan debt. Others are less costly; for an estimated $55 billion, the United States could create a “baby bond” program that would largely close the racial wealth gap for young adults. Still other solutions would be free, including hiring more people who have been to jail or prison and banning employment discrimination based on a person’s hairstyle — a law that has already been passed in seven other states.

For Clint Myrick of Milwaukee, forgiving most or all of his six-figure student loan would be transformative, allowing him and his family to finally get ahead in a city where many Black residents struggle for a middle-class life.

“Some people wouldn’t even have debt if you eliminate those (student loans). I’m one of them,” Myrick said. “I wouldn’t have to work a second job if they wiped them clean. I would have more time with the family. Wiping student loans across the board for Black folks … it would change everything.”

How you can get involved:

Public engagement and participation are important components of this project. Wisconsin Watch is continuing to seek out people whose individual or family income or wealth has been affected by race and are willing to share their stories.

Are you a Wisconsin resident descended from enslaved people? Have you been denied a job or fired because of your race? Have you been unable to get a home loan? Do you struggle with high student-loan payments, or have you decided not to go to college because it is too expensive? Have you faced employment discrimination because you were in jail or prison? Have you or your family overcome racial barriers to achieve financial success?

To offer a suggestion to the reporters or become a potential source for a story in the series, please email colorofmoney@wisconsinwatch.org or text the word “money” to 73224. You will receive a response inviting you to share your question, comment or story.

Previous student-generated projects published by Wisconsin Watch include Narrow Margin, which explored voting security, suppression and disinformation aimed at voters in Wisconsin; The Cannabis Question, an examination of what would happen if Wisconsin were to legalize marijuana; Undemocratic: Secrecy and Power vs. The People, which documented the waning influence of regular citizens on the state’s democracy; Broken Whistle, which examined declining protections for whistleblowers in Wisconsin; and Failure at the Faucet, a national award-winning investigation of threats to the quality of the state’s drinking water.

Wisconsin Watch’s Color of Money series probes racial wealth and income gap in Wisconsin is a post from WisconsinWatch.org, a non-profit investigative news site covering Wisconsin since 2009. Please consider making a contribution to support our journalism.