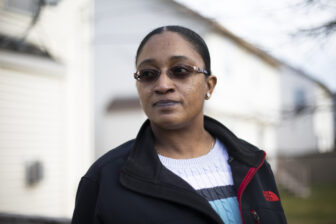 Sable-Smith was honored for Best Investigative Reporting in the large market radio category in Region Four  — which covers Wisconsin, North and South Dakota and Minnesota — for Costly Care, an audio series that exposed the practice of hospitals suing patients for past-due bills during the pandemic. Online versions of those stories also were published on WisconsinWatch.org.

WPR’s COVID-19 obituary series, which profiled Wisconsin residents who had died from the pandemic, also won top honors for Best News Series. Among the installments was Sable-Smith’s audio story, Duane Bark — beloved educator and football coach who painted daughter’s nails, dies of COVID-19 at 61, which was also published by Wisconsin Watch.

Both series will be considered for national Edward R. Murrow Awards.

After its airing and publication, the Costly Care audio and online series prompted several hospital chains to halt aggressive debt collection efforts against former patients. Sable-Smith had the happy job of notifying Blanche Jordan of Milwaukee that a lawsuit over her alleged $7,150 hospital debt was now history. “Shut the front door!” the ecstatic nursing assistant exclaimed when she heard the news.

“I don’t even know how to feel right now,” Jordan told him. “My heart is racing. I’m shaking right now, because these doctors bills have literally taken over my whole life.”

The Murrow Awards are the embodiment of the values, principles and standards set forth by Edward R. Murrow, a journalism pioneer who set the standards for the highest quality of broadcast journalism.

“We’re pleased that the Murrow Awards recognized the impact of Bram’s reporting, and we appreciate all of the Wisconsinites who shared their stories with us. I’ve deeply enjoyed working with such a thoughtful, mission-driven reporter and storyteller,” Wisconsin Watch Investigations Editor Jim Malewitz said.

Wisconsin Watch and WPR win Regional Murrow awards for pandemic-related coverage is a post from WisconsinWatch.org, a non-profit investigative news site covering Wisconsin since 2009. Please consider making a contribution to support our journalism.