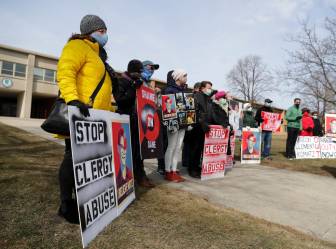 Of note: This week we highlight a story by the USA TODAY NETWORK-Wisconsin revealing that Democratic Attorney General Josh Kaul plans to investigate how Wisconsin Catholic Church dioceses have handled the scourge of sexual abuse of young children by as many as 177 clergy members. “I agree with the many survivors of clergy abuse, and those who support and have advocated for them, that a review by our office is necessary to provide accountability and, ultimately, healing,” Kaul wrote to the heads of Wisconsin five Catholic dioceses. “I hope you will welcome that review.”

Wisconsin authorities will launch an investigation into the state’s Catholic dioceses and religious orders to determine how many clergy members have sexually assaulted children over the years. Attorney General Josh Kaul notified the state’s five dioceses and some orders that his office will conduct a review of sexual abuse at the hands of clergy and other faith leaders, according to a letter obtained by USA TODAY NETWORK-Wisconsin. Kaul invited representatives for the dioceses and orders to a meeting Monday to discuss next steps and indicated his office would announce the review soon after. The letter also asked that dioceses preserve any relevant documents or information.

See Wisconsin Watch’s earlier coverage: ‘I was such a little kid’: As Wisconsin Catholic clergy accused of sexual abuse grows, the trauma lingers

Three Wisconsin utilities are considering plans to purchase a 465-megawatt solar and storage facility proposed for southeastern Dane County that would be Wisconsin’s largest renewable energy plant. Chicago-based developer Invenergy last week filed an application with the Public Service Commission for permission to build the 2,400-acre project just north of Interstate 90 in the towns of Christiana and Deerfield. If approved, the project — known as Koshkonong Solar — would begin construction next year and begin generating electricity by the end of 2024, according to Invenergy’s application.The same utilities filed applications earlier this year to buy a 310-megawatt solar-battery project under development in Kenosha County and a 325-megawatt project in Walworth County, as well as a proposed 92-megawatt wind farm in Grant County for a combined price tag of just over $1 billion.

Wisconsin’s revised contract with Foxconn would give the company $80 million in tax breaks in exchange for 1,454 jobs by 2024 — a fraction of the $2.85 billion contract that called for 13,000 jobs. Since that was inked in 2017, there has been little activity and fewer than 1,000 people hired in the state by the Taiwanese manufacturer. Gov. Tony Evers said the deal “treats Foxconn like any other business and will save taxpayers $2.77 billion, protect the hundreds of millions of dollars in infrastructure investments the state and local communities have already made, and ensure there’s accountability for creating the jobs promised.” In a statement, Foxconn Technology Group said it welcomed the deal, blaming the ever-shrinking project on “unanticipated market fluctuations.”

So you want information about your child’s school; got $500?

Are public records truly public if the public can’t afford them? That’s the question Waukesha School District parents are asking after filing a series of open records requests; they say the responses gave them sticker shock. “The first thought that comes to your mind is, ‘That’s outrageous,’” David Wadd, whose daughter is a high school freshman in the district, said. “I mean this is public data, this is data about the performance of our children.” In the fall, Waukesha parent Rebecca Flaherty filed an open records request with the district requesting student performance data, including hours of absences, percentage of students failing at least one class, percentage of students that have dropped out, average GPA, class drops and quarantine information. The district’s response letter, dated December 8, said it would cost 16 hours to locate the data at $33.19 per hour, with a total cost of $531.04. Open records advocates say the situation highlights long-standing issues with Wisconsin’s public records law; municipalities argue the charges are necessary.

Milwaukee put race front and center as it tracks COVID-19’s toll, helping shape a national conversation on racism as a public health crisis

Inequality can be deadly. Milwaukee was among the first counties to reveal how deadly when the coronavirus pandemic struck just over a year ago. By tracking and publicly sharing demographic data, officials here quickly recognized what soon became a troubling national trend: COVID-19 was devastating Black and Latino communities. But their efforts actually began even before COVID-19 struck, with a pair of declarations, by the county and the city, that racism is a public health crisis. Those declarations — now echoed by communities around the country and the head of the U.S. Centers for Disease Control and Prevention — helped shape how officials have responded to the pandemic, and how willing they’ve been to share information with the public.