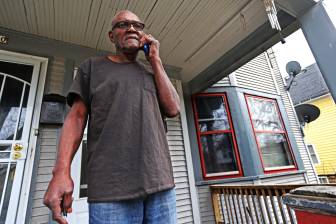 A data breach at a Christian crowdfunding website has revealed that serving police officers and public officials have donated money to fundraisers for accused vigilante murderers, far-right activists, and fellow officers accused of shooting black Americans. The beneficiaries of donations from public officials include Kyle Rittenhouse, who stands accused of murdering two leftwing protesters in Kenosha, Wisconsin, last August. Several Wisconsin police officers also donated to a fundraiser for Rusten Sheskey, the Kenosha police officer whose shooting of a black man, Jacob Blake, led to the protests that drew Rittenhouse to the city.

Out-of-state corporate landlords are gobbling up Milwaukee homes to rent out, and it’s changing the fabric of some neighborhoods

Meet the new breed of landlord invading Milwaukee: A couple of former Silicon Valley executives who were crewmates on the Harvard rowing team; a fast-growing Ohio company that owns more than 13,000 rental homes in 14 states; a native of Peru who has run real estate companies in Houston and Palm Beach, Florida; and a southern California woman who was looking for a place to park her cash windfall. This diverse group illustrates a phenomenon that could have major ramifications on the housing market in Milwaukee and other urban centers. Out-of-state companies and investors attracted by cheap properties and healthy profits are gobbling up scores of single-family homes and duplexes, as well as some apartment buildings, in Milwaukee. They rent them out, sometimes with little interest in — or knowledge of — the neighbors around them.

The Burlington Area School District has allowed a “racially hostile environment” to exist in its schools, state officials have found after verifying 19 incidents of misconduct, including several times students used the “N word” between 2016 and 2020.  The state Department of Public Instruction has given school administrators 30 days to produce a plan for updating district policies and for preventing racial harassment that the state has called “severe, pervasive and persistent.” The state finding stems from a race discrimination complaint filed by Darnisha Garbade, an African-American mother of former Burlington students who also is founder of the group Burlington Coalition for Dismantling Racism.

‘Season of rebirth’: A Madison ER nurse ponders life after the pandemic

Following a March overnight shift in the emergency department at UW Health in Madison, nurse Mariah Clark walked outside and heard birds chirping for the first time in months. “It made me inexplicably happy,” Clark said. After a year of reflecting on the traumas she witnessed while treating COVID-19 patients and losing her own loved ones to the deadly disease, the spring song prompted introspection about a life after the pandemic.

This is the latest installment of our Outbreak Wisconsin collaboration. Read and listen to the full series here.

Wisconsin Weekly: Drug overdose deaths surge in Milwaukee County, but a task force fails to meet is a post from WisconsinWatch.org, a non-profit investigative news site covering Wisconsin since 2009. Please consider making a contribution to support our journalism.