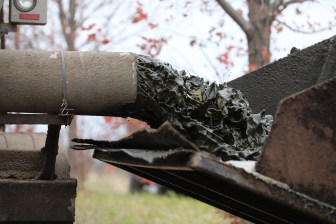 The state Supreme Court on Monday hears arguments in a case that could determine whether the Wisconsin Department of Natural Resources failed to adequately protect water from manure pollution when awarding a permit to a giant dairy farm in northeastern Wisconsin — or whether the agency lacks the authority to issue such restrictions.

The case involving Kinnard Farms, a Kewaunee County mega-dairy farm with about 8,200 cows, has become a regulatory battleground, drawing a litany of environmental and industrial groups in support or opposition to the lawsuit. The GOP-controlled state Legislature even petitioned the court to intervene on behalf of the owners of Kinnard Farms, which the justices allowed.

Much of the debate focuses on legal interpretations of 2011 Act 21, which Kinnard Farms and its advocates argue limits agency powers to what is explicitly written in statute, leaving little wiggle room for interpretation. Those parties argue that the DNR lacks authority to cap Kinnard’s animal population and require groundwater monitoring off-site — conditions ordered by lower courts.

“Act 21’s application here is straightforward: because no statute or rule explicitly required or explicitly permitted DNR to impose off-site groundwater-monitoring or animal-unit maximum conditions in the permits at issue, DNR lacked authority to do so,” lawyers for the Legislature argue in a brief.

Kinnard Farms, which did not respond to a request for comment, argues that the Legislature, in thrusting itself into the dispute, “has made it clear” that it wants to restrain the DNR.

Midwest Environmental Advocates, which is suing on behalf of Clean Wisconsin and several area residents, argues that Wisconsin law explicitly grants DNR the authority in question, and the federal Clean Water Act requires such actions to protect the area’s water.

The case is back in the spotlight amid growing scrutiny of industrial farms in some Wisconsin communities. Midwest Environmental Advocates says the court ruling could affect not just the DNR’s authority but “may have far-reaching implications for other state agencies,” Adopting the industry’s view of Act 21, the environmental groups argue, “would create widespread uncertainty about agency authority.”

A ruling would resolve a fight that began in 2012 when Town of Lincoln residents asked the DNR to review whether Kinnard Farms’ water pollution permit protected surrounding waters. Manure tends to be rich in nitrogen and phosphorus, which can be good for fields and crops when applied in the right ratios. But it also contains bacteria, nitrates, viruses and other pollutants that can seep into groundwater and run off fields into lakes and rivers.

Kewaunee County — where cattle outnumber people nearly 5 to 1 — sits atop thin soils and cracked karst bedrock that offer prime pathways for such disease-causing pollutants. In 2014, an administrative law judge heard testimony from five Kinnard Farms neighbors who described living through a nightmare in Lincoln, where as many as half of private wells were contaminated, including up to 30% that had tested positive for E. coli bacteria.

David Mindak testified to eating anti-diarrhea medicine “like it was candy” after drinking water from a well 100 feet away from a Kinnard spreading field and falling ill. Sandra Weinnemuller, a registered nurse, suspected that her family’s cloudy water left them sick with stomach cramps and diarrhea.

Judge Jeffrey Boldt found Lincoln’s water woes “could fairly be described as a crisis.” He instructed the DNR to cap the number of cattle at the farm and monitor groundwater in the area, writing, “The proliferation of contaminated wells represents a massive regulatory failure to protect groundwater in the Town of Lincoln.”

The DNR under Republican Gov. Scott Walker initially moved to implement Boldt’s order, only to reverse itself nearly a year later, saying it lacked authority to do so. The DNR cited an opinion from then-Attorney General Brad Schimel, which the agency requested “for reasons that remain obscure,” a Dane County Circuit judge wrote in a 2016 ruling. Calling the case “extraordinary,” the judge affirmed DNR’s powers to add conditions to Kinnard’s permit.

Kinnard Farms is a CAFO, or concentrated animal feeding operation, which the federal government defines as a farm where more than 1,000 “animal units” — or roughly 700 cows — are confined on site for at least 45 days of the year.

The DNR as of January had  issued 319 water discharge permits for  CAFOs, most of them dairy farms. While Wisconsin’s small farms  are increasingly vanishing because of low and volatile milk prices and other challenges, industrial farms are expanding. That consolidation has pushed Wisconsin’s cows — and their manure — into fewer spaces, escalating complaints in communities over odors and the risk of manure polluting local groundwater and streams.

That prompted Utesch to form her group. Most community members initially accepted such events — especially manure runoff from spring rains and snowmelt — as the cost of rural living, Utesch said. Residents have since heightened scrutiny of the county’s 17 dairy CAFOs as they learn from research efforts. That includes citizens who with environmental groups petitioned the U.S. Environmental Protection Agency in 2014 to take action, which prompted investigations of the problem.

“It’s not just the idea that you have brown water, it’s actually citizenry learning and coming into the knowledge of what that means for you and your home,” Utesch said in an interview.

U.S. Department of Agriculture microbiologist Mark Borchardt has spent years investigating Kewaunee County’s tainted wells, finding that waste from humans and livestock share blame. But his 2019 study showed that agriculture was mostly responsible for the county’s nitrate and coliform contamination.

Outside of the Kinnard dispute, DNR has sought to protect water in other ways. In 2018, for instance, the agency finished updating a farm runoff rule called NR 151 to strengthen standards for manure spreading in Kewaunee County and other parts of northeast Wisconsin where porous karst rock makes groundwater particularly vulnerable to pollutants.

Following years of scant regulatory oversight, Utesch said she is pleased to see the state step up fines against farms that violate runoff rules.

“But I’ll also preface that with that it’s long overdue,” she said.

Regardless of the Supreme Court ruling, environmentalists and consumer advocates say Wisconsin should strengthen oversight of big farms statewide.

A DNR proposal would extend NR 151 protections to all parts of Wisconsin where groundwater is susceptible to nitrate contamination above the state standard. Those conditions occur across Wisconsin, with higher concentration in the Central Sands, Chippewa River Valley, and southcentral areas, according to the DNR.

The proposal, which is now open for public comment, also would require DNR to place conditions, as needed, on CAFO permits to protect water quality. The Natural Resources Board is slated to consider adoption by fall, after which the GOP-controlled Joint Committee for the Review of Administrative Rules would hold winter hearings.

Environmental advocates and other critics complain that rulemaking in Wisconsin can now stretch for years under Act 21, which added extra layers of bureaucracy. But U.S. Rep. Tom Tiffany, a Republican who sponsored the law while in the Legislature, calls that outcome “a feature, not a bug.”

That rule is pending as other Wisconsin communities grapple with groundwater contamination. Tests last year of 35 drinking water wells in Grant, Iowa and Lafayette counties in southwest Wisconsin — which also sit atop fractured bedrock — found contamination by human and animal waste in 21 of them, according to the Southwest Wisconsin Groundwater and Geology Study. Researchers said it was too soon to draw conclusions from the tests, and the results could not be extrapolated for the entire region.

Elsewhere, some local governments are considering regulating CAFOs on their own.

In Washburn County this week, voters in Chicog approved a non-binding referendum asking the town board to adopt an ordinance barring CAFOs within town boundaries. The resolution passed by an 83-49 vote, according to the county clerk’s unofficial tally.  The town currently has no CAFOs.

“We’ll definitely discuss it at our next meeting and we probably will do something,”  Steve Loiselle, a board supervisor, said after the vote. “Our only concern about it is if we have to fight some huge organization, how expensive it can get for the town.”

Several other local boards and councils have enacted at least temporary moratoriums on CAFO development, but Mike Koles, executive director for the Wisconsin Towns Association, said Chicog’s referendum was the first he has seen of that kind in Wisconsin.

The Polk County Board of Supervisors last fall backed down from extending its own CAFO moratorium one day after a letter from the Wisconsin Dairy Alliance, Wisconsin Manufacturers and Commerce and Venture Dairy Cooperative warned that such a move would exceed the board’s power, “which is a felony in Wisconsin.”

Local bans on CAFOs are unlikely to hold up in courts, Koles said.

“It might send a message to farmers that you’re not welcome here,” Koles said. “But from a legal standpoint, the hurdles that they would have to go through as a farm really can’t legally change, referendum or not.”

The nonprofit Wisconsin Watch (wisconsinwatch.org) collaborates with WPR, PBS Wisconsin, other news media and the University of Wisconsin-Madison School of Journalism and Mass Communication. All works created, published, posted or disseminated by Wisconsin Watch do not necessarily reflect the views or opinions of UW-Madison or any of its affiliates.