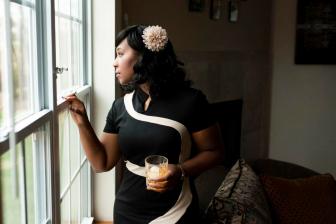 Of note: This week we highlight reporting by former Wisconsin Watch intern Natalie Yahr, whose Cap Times story details the hurdles business owners of color in the Madison area have faced during the nearly yearlong pandemic. “While the pandemic has turned much of the economy upside down, its toll on businesses has been far from evenly distributed,” Yahr writes. “Much as people of color make up a disproportionate share of those hospitalized and killed by the virus … many business owners of color were already operating with little room for error, enjoying less generational wealth, less access to bank loans and less help from professional accountants or lawyers than their white counterparts.”

Dreams on the line: Many business owners of color were already operating with little room for error. And then the pandemic hit.

The pandemic hit China Moon Crowell early — and hard. In February 2020, when public health authorities still mistakenly believed the only people contracting the novel coronavirus were those who had traveled abroad, Crowell got sick. Too weak to climb into her bed, she spent five weeks sleeping on her couch. She was living alone, and her breathing was so labored she asked her mom to stop by if she didn’t hear from her every six hours. “I was diagnosed with the flu,” Crowell said. “And I’m like, ‘This is not the flu.’ ” After more than a month, her body recovered from what she’s sure was the coronavirus. But the damage to her business was only beginning.

In the Wisconsin judicial district made up of Kenosha, Racine and Walworth counties, Black men are more than 50 percent more likely to be sentenced to prison than white men accused of similar crimes, a study shows. According to data included in a draft report for the Wisconsin Court System, the three-county Second Circuit District has among the state’s worst disparities in sentencing outcomes when comparing white men charged with crimes to Black and Hispanic men.

University of Wisconsin-Madison third-year student Azul Kothari describes how he and others navigate the campus during the pandemic. New this semester: Required spit-based COVID-19 tests every few days. “Saliva testing is something that feels really weird to do,” Kothari said. “It’s literally the grossest thing.”

Read and listen to more from the Outbreak Wisconsin collaboration here.

This story traces how former President Donald Trump pushed weeks of fiction to his millions of supporters that set the stage for a new and equally false iteration: that left-wing agitators were responsible for the attack on the Capitol. In fact, the rioters breaking into the citadel of American democracy that day were acolytes of Trump, intent on stopping Congress from certifying his electoral defeat. Among the prominent sowers of disinformation in the riot’s aftermath: U.S. Sen.  Ron Johnson, a Wisconsin Republican, who repeated the falsehood that “fake Trump protesters” fomented the violence.

In late February, Foxconn executives announced plans to begin manufacturing electric vehicles for California-based start-up Fisker Inc. Both companies said the collaboration will “revolutionize the automotive industry.” They compared their work to the scientific discoveries of Isaac Newton. And hinted they could even manufacture the cars here in Wisconsin. The partnership announcement is the latest for the Taiwanese mega-manufacturer. It follows a string of high-profile announcements that have been abandoned by Foxconn or that have severely underperformed the company’s promises.

Related story from Wisconsin Watch: Property owners near Foxconn say they were misled. Now their homes are gone.

Wisconsin Weekly: Small business owners of color hit hard by pandemic is a post from WisconsinWatch.org, a non-profit investigative news site covering Wisconsin since 2009. Please consider making a contribution to support our journalism.