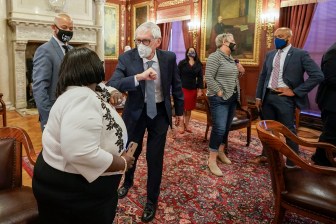 Proposals to change Wisconsin’s voting system could determine how one of America’s top swing states picks congressional candidates, how it awards its 10 Electoral College votes, how fast results can be announced and who can use the increasingly popular method of absentee voting. But the political divisiveness that caused Wisconsin to flip from red to blue by the slimmest of margins in the 2020 presidential race will likely continue, stymying all but the few changes that enjoy bipartisan support. A Republican-led Legislature and a Democratic governor mean that purely partisan priorities are unlikely to make their way through, experts told Wisconsin Watch.

See related coverage by the Milwaukee Journal Sentinel: If approved, Republican voting legislation would face a wave of lawsuits in Wisconsin

How to get a COVID-19 shot in Wisconsin: Vaccine hunters share tips

Robin Davis was thrilled to learn that Wisconsin deemed her family eligible for COVID-19 vaccinations starting March 1. That offered hope that she and her children could soon safely venture outside their Milwaukee home. But Davis wasn’t sure how to book an appointment. The signup websites she found failed to demystify the process. She found a Facebook group called Milwaukee & WI Area Vaccine Hunters and Angels, where Wisconsinites share tips for snagging appointments. She joined the group and posted her story. That connected her with group founder Bob Orech, who said he made it his “personal mission” to find vaccines for the Davis family. Orech linked her to a Walgreens pharmacist he met through the group. Davis and both children received their first shots the next day.

Deep below the cold, dark surface of Lake Superior, sensors strung like pearls along a vertical steel cable sway with the currents. Recording the lake’s dropping temperatures as winter sets in, their gentle rhythm belies their worrying readings: the lake is getting warmer. Jay Austin heaved several of these science experiments off a boat last fall. In the spring, he will collect them and download their readings. Austin is a physicist at the University of Minnesota Duluth’s Large Lakes Observatory who studies the thermal structure of lakes and has been taking Superior’s winter temperature since 2010. He is part of a group of scientists beginning to sound alarms over the lake’s warming.

Julie Welch has taught middle school for 30 years. But she never dreamed of instructing 23 sixth graders over Zoom from the basement of her home in West Salem, Wisconsin, saying she has a “love-hate relationship” with technology. But she has found virtual teaching with the La Crosse School District’s Coulee Region Virtual Academy surprisingly fulfilling. “I am amazed how much I love online teaching. What I find is that I’m spending my days laughing and teaching and working with kids,” Welch said.

The city of Green Bay and Democratic lawmakers are pushing back against a report from a conservative news outlet that a private group essentially took over the administration of the city’s presidential election in November. The conservative Wisconsin Spotlight reported that grant money from the Center for Tech and Civic Life — funded largely by Facebook CEO Mark Zuckerberg — led to “Democrat activists infiltrating the November presidential election,” prompting some GOP lawmakers to call for Green Bay Mayor Eric Genrich to resign. In a statement, the city of Green Bay said the allegations were “completely without merit,” adding, “The election was administered exclusively by city staff. No ballots were ever in the care or custody of these consultants.”

See related coverage by APM Reports, How private money helped save the election.