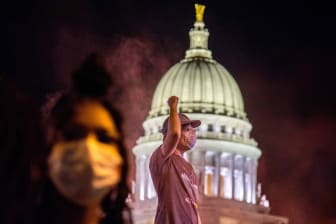 The Milwaukee Press Club is honoring stories by Wisconsin Watch about major issues that confronted the state in 2020, including the contentious presidential election, COVID-19, a racial reckoning, disinformation and Wisconsin’s dysfunctional unemployment compensation system. Wisconsin Watch also has won awards for its coverage of lax excavation regulations, high medical debt, an examination of how rural schools managed during the pandemic and a controversial child abuse doctor accused of bullying and making false claims of abuse against parents.

In all, Wisconsin Watch published or collaborated in 12 award-winning stories or series in the 2020 Excellence in Journalism contest. That brings to 100 the number of Milwaukee Press Club awards Wisconsin Watch has won since its launch in 2009.

Whether the entries won gold, silver or bronze is expected to be announced in May.

Several of the stories were produced in collaboration with WPR and the Cap Times, which sponsored fellows embedded in the Wisconsin Watch newsroom in 2020, and with University of Wisconsin-Madison journalism students. Wisconsin Watch also collaborated with Milwaukee Neighborhood News Service, APM Reports, WisContext, First Draft News, the University of Wisconsin-Madison Center for Journalism Ethics and 371 Productions.

Here are the winning entries:

This story examined the polarized politics in the state that has often paralyzed its response to the COVID-19 crisis — and the price families paid for Wisconsin’s lack of action. It was reported by Bram Sable-Smith, the Mike Simonson Memorial Investigative Reporting fellow embedded in the Wisconsin Watch newsroom.

This entry is a collection of stories about the protests in Wisconsin over police violence against Black people, including examinations of best practices when it comes to policing protests, what “defunding” the police might look like in Milwaukee, and stories about the fallout from the violent demonstrations in Kenosha, in which two protesters were gunned down by a 17-year-old vigilante from Illinois. Wisconsin Watch also reported that police coordinated with militia members in the hours leading up to that fatal encounter.

Wisconsin Watch Investigations Editor Jim Malewitz reported on voters whose absentee ballots never arrived for the April 7 election and the choices they made to risk their health and vote — or to sit out the election to avoid exposure to COVID-19.

Wisconsin Watch has two winning entries in this category. Parker Schorr, Wisconsin Watch’s Cap Times public affairs reporting fellow, will be honored for his investigation into Wisconsin’s lax regulations around excavation that put workers and the public at risk. Sable-Smith also is being honored for Costly Care, his series of stories about hospitals that continued to sue their patients for medical bills — even after the pandemic left many of them struggling financially.

Sable-Smith also will be honored for Lives on Hold, a series of stories for Wisconsin Watch and WPR about Wisconsin’s dysfunctional unemployment compensation system, which buckled under the crush of claims as the pandemic threw hundreds of thousands of state residents out of work.

Wisconsin Watch also will be honored for two stories in this category. Managing Editor Dee J. Hall and Coburn Dukehart, Wisconsin Watch’s multimedia and digital director, were honored for an investigation into Dr. Barbara Knox, a child abuse pediatrician at American Family Children’s Hospital. Colleagues had accused Knox of bullying them into finding that children had been harmed, and a couple from Mount Horeb said Knox had lodged false allegations of abuse against them. Will Cushman and Kristian Knutsen of WisContext will be recognized for coverage of flaws in how data about the COVID-19 pandemic was being reported by the state — and efforts by some to twist that information to mislead the public. Wisconsin Watch’s Malewitz and reporter Howard Hardee contributed to that story.

Wisconsin Watch’s Max Witynski, Jessica Christoffer and Howard Hardee along with First Draft’s Keenan Chen teamed up with the UW-Madison’s Center for Journalism Ethics on a series of stories exposing election-related disinformation in Wisconsin around the 2020 election. The entry included toolkits produced by Hardee for consumers and journalists on how to detect and combat disinformation.

Peter Cameron, reporting for Wisconsin Watch, produced a three-part series, Lesson Plans: Rural schools grapple with COVID-19. The series documented the struggles in rural parts of Wisconsin — which often lack adequate internet service — to educate students during the pandemic. Coburn Dukehart and Will Cioci contributed images to this series.