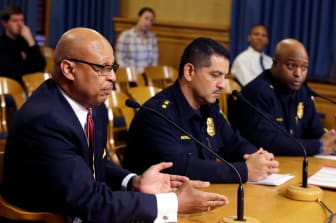 Of note: This week we highlight a four-part investigation by Ashley Luthern and Gina Barton of the Milwaukee Journal Sentinel into an alleged case of sexual assault that has exposed a tangled web of relationships and dysfunction in city politics. It started with a charge that an influential developer with close ties to the board that oversees the Milwaukee Police Department had drugged and sexually assaulted a woman with whom he had a relationship. “The conflict of interest sparked infighting among commissioners and public officials that has upended Milwaukee’s search for a new police chief,” the reporters found. The suspect, who denies the allegations, has not been arrested or charged, and the investigation is ongoing.

In 2019, “Jane Doe” reported to police that Kalan Haywood Sr., a prominent real estate developer, had raped and possibly drugged her. He denies wrongdoing and has not been arrested or charged. Doe filed a lawsuit, settled earlier this year, arguing that Milwaukee Police violated her rights as a crime victim by repeatedly failing to notify her about important developments in the investigation. The Journal Sentinel’s probe uncovered problems that go far beyond a mishandled rape allegation, including alleged conflict of interest involving one of Haywood’s attorneys, Steven DeVougas, who accompanied his client to the police interrogation while serving as chairperson of the Fire and Police Commission.

When someone calls 911, there’s no guarantee help with come in several northern Wisconsin towns

Bud Rubeck never saw him coming. It was late one night four years ago. Rubeck and his wife Julie had gone over to a neighbor’s house in Clam Lake to try to smooth things over between a couple who had been fighting. Instead, the man blindsided him, punching Rubeck on the left side of his head. He fell and hit the ground hard, leaving him with brain bleeding and unable to breathe. Without the critical care paramedics who responded, “I would have been dead,” said Rubeck, now 68. Great Divide Ambulance Service was there to respond, taking him to Cable, where a helicopter flew him to a hospital in Duluth. Today, if someone in Clam Lake dials 911, there’s no guarantee anyone will answer. “We’re on our own,” said Rubeck.

For many in the Wausau area, race and the experiences of people of color are afterthoughts at best — and when those topics arise they generate resistance. The Marathon County Board is still debating whether to recognize February as Black History Month, even though federal, state and local governments across America have been celebrating the month for 45 years. Part of the resistance may be because so few people in Wausau know what it’s like to be Black: Fewer than 1% of the city’s residents are Black, according to 2019 U.S. Census Bureau estimates. This isn’t a new struggle for people of color who live in the Wausau area, but frustration with people’s refusal to acknowledge them has reached a tipping point. Some, like Aaliyah Coppadge, have decided now is the time to get people to talk about race and disparities.

Biden won in Wisconsin, but a dispute over certifying the results has gotten messy

Wisconsin’s presidential votes have been cast, counted, recounted and confirmed by state and federal courts, but the fight over November’s election lives on. A dispute over how Wisconsin certified its votes has gotten messy. A Republican state elections commissioner has filed complaints against his own agency and Democratic Gov. Tony Evers, but he hasn’t said whether he will refrain from deciding the cases he brought. Taxpayers are paying two private law firms to deal with the complaints. Meanwhile, liberal groups have asked for an investigation into a group of Republicans who purported to certify Wisconsin’s results for Donald Trump in December even though Joe Biden won the state. They contend the Republicans committed fraud because they knew Trump had lost.

‘Was that something we wanted to have happen? Absolutely not.’ Gray wolf kill rises to 216, 82% above state-licensed goal

Hunters and trappers killed 216 gray wolves in the 2021 Wisconsin wolf harvest season, 82% above the state-licensed goal, according to Department of Natural Resources data released Thursday.  The hastily-arranged season began Monday and ended Wednesday. State-licensed hunters and trappers had a harvest quota of 119 spread across the state, excluding Native American reservations. The swift pace of the wolf kills, mostly by hunters using trailing hounds, took the DNR by surprise. And the overage was made worse by a state statute that requires 24-hour, rather than immediate, notice of the season closure, as well as a decision by the Natural Resources Board to issue twice as many as the normal number of permits.