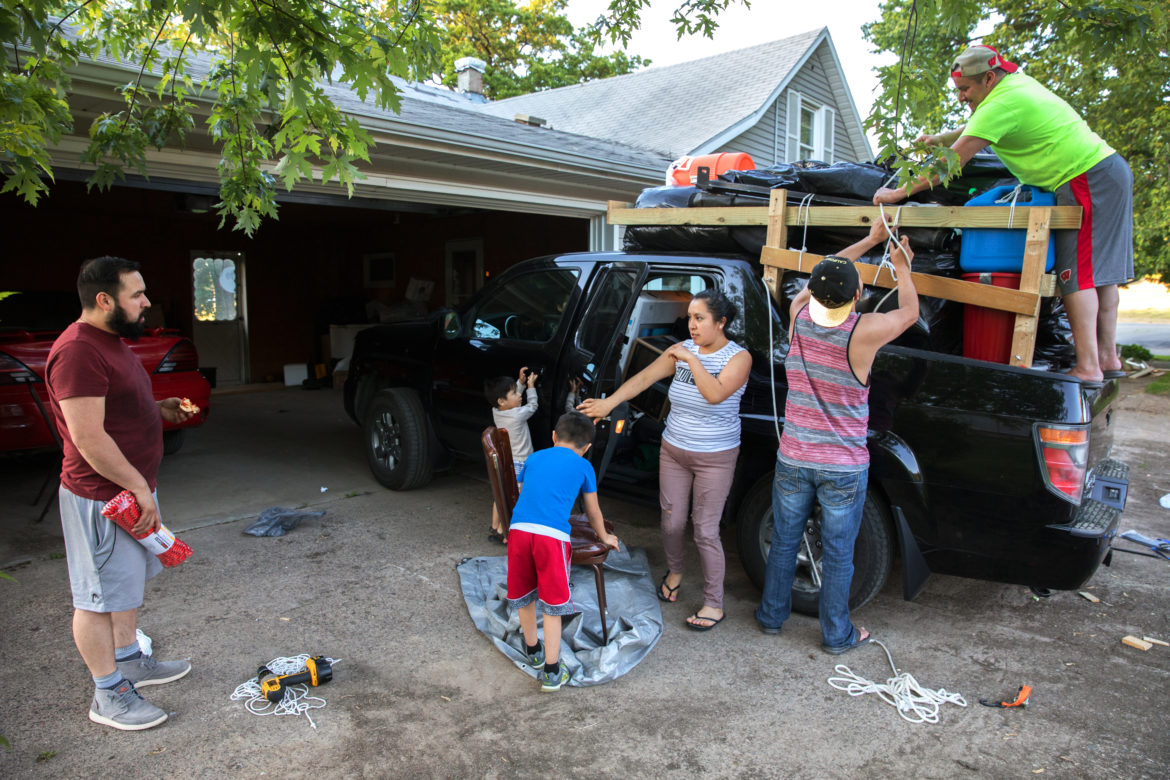 When word got around that immigration officers were spotted in a nearby town, other Wisconsin farm workers who were in the United States illegally decided to join Miguel Hernandez, his wife, Luisa Tepole, and their two sons on their journey back to Mexico. Photo taken in Pepin County, Wis., on May 31, 2017.

“Los Lecheros” (Dairy Farmers), an award-winning film that explores rising tensions over undocumented dairy workers since the election of President Donald Trump, today became available on The Atlantic Selects, a showcase of short films curated by The Atlantic.

“Wisconsin, which hadn’t voted for a Republican president since 1984, played a decisive role in electing Donald Trump, and I wanted to better understand this shift, ” filmmaker Jim Cricchi told The Atlantic’s Emily Buder.

“We’re thrilled that a large audience across the nation now will be able to view this timely examination of the effects of President Trump’s immigration policies here in America’s Dairyland,” said Andy Hall, executive director of the investigative center and a co-producer of “Los Lecheros.” The film previously has been available for viewing only in person at film festivals or for special showings and short-run digital events.

In May and June 2017, Cricchi brought his camera to western Wisconsin, and along with Wisconsin Public Radio and Center reporter Alexandra Hall and photographer Coburn Dukehart, documented an immigrant family preparing to leave after working 16 years on a dairy farm. The film shows Miguel Hernandez and his wife Luisa Tepole packing up to take their two American-born sons back to their hometown of Texhuacán, Mexico, as fear of an immigration crackdown created uncertainty in their lives. Hernandez is now working as a taxi driver in his hometown, as his family builds a new house there.

“It’s better to be here until things calm down,” his wife Luisa recently told The Progressive magazine. She also said that life in Mexico was better for the family, including their children Thomas and Liam. “There, they spent a lot of time on TV, the tablet, the computer,” Luisa told The Progressive. “Here they can go out with their friends and run. . . . It’s healthier.”

The documentary features dairy manager Guillermo Ramos, a Mexican immigrant who has worked for 17 years on another farm in Wisconsin.

“With politics as they are right now, the reality is we live with fear,” Ramos says. “Mexicans say, ‘You work and eat — or you hide and your family suffers.’ What should I do? I’m afraid but I still have to work.”

In the film, Buffalo County farmer John Rosenow, who has advocated publicly for immigration reform, says that immigrants are critical to the state’s $43 billion-a-year dairy industry.

“Mass raids would devastate the dairy industry,” Cricchi told The Atlantic. “Right now, Wisconsin is losing about 10 dairy farms a week due to collapsed milk prices and labor shortages.”

“Los Lecheros” has currently been accepted, or screened, at 15 film festivals nationwide, and was featured on the Milwaukee PBS shows 10thirtysix and ¡Adelante!

This is the first film produced by the Center, and the first documentary film directed by Twelve Letter Film’s Jim Cricchi, who has been an editor for 20 years working on documentaries, feature films, television and short films for outlets including Vice on HBO and The New York Times.