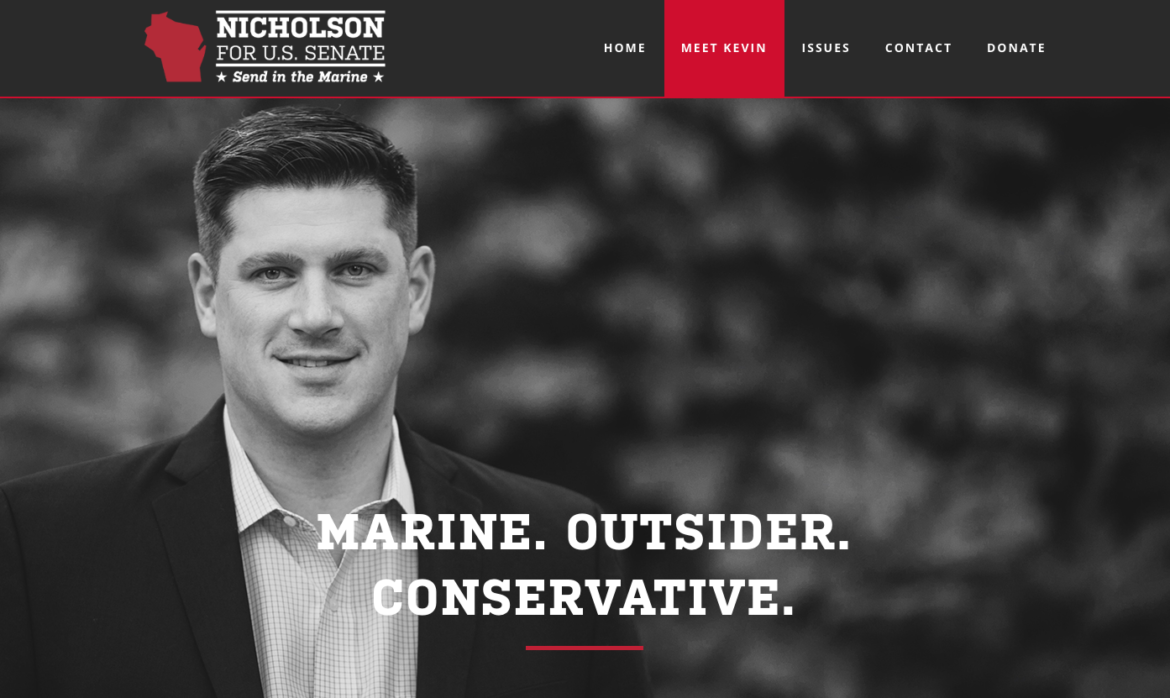 Kevin Nicholson, a 40-year-old businessman from Delafield, is running for the GOP Senate nomination against longtime state Sen. Leah Vukmir of Brookfield. The winner will take on Sen. Tammy Baldwin in November. While originally affiliated with the Democrats while in college, he is now running as a Republican.

This story on Wisconsin’s U.S. Senate race was written by Marquette University journalism student Patrick Thomas under the supervision of Dave Umhoefer, a Pulitzer Prize-winning former reporter for the Milwaukee Journal Sentinel. Umhoefer teaches advanced journalism at Marquette and is director of the university’s O’Brien Fellowship in Public Service Journalism program.

Read more stories in this package on the U.S. Senate race.

Marine veteran Kevin Nicholson is running for U.S. Senate as a Washington outsider and anti-politician who drifted from the Democratic Party after going to war and starting a family.

But he’s no political novice or stranger to the nation’s capital, and his partisan conversion may have roots in an impeachment clash with fellow college activists.

Nicholson harbored serious political ambitions as far back as his days at the University of Minnesota, when he announced that his goal was to be president of the United States.

He worked to pull off a stunning rise to lead the national College Democrats of America, then moved from campus to the nation’s capital.

He fought bitterly with other young Democrats who narrowly lost a bid to impeach him for what they called abuses of power — a move he saw as simple political retribution.

Details of his college days found in back issues of the Minnesota Daily and from interviews with College Democrats of America executive board members who served with him show that Nicholson mounted several political campaigns as a young Democrat, with the one in Washington, D.C., sparking controversy.

WisPolitics.com hosted a luncheon with GOP U.S. candidate Kevin Nicholson on Jan 30, 2018, to talk about the 2018 race for the seat now held by Tammy Baldwin. Video courtesy of WisconsinEye

Eighteen years later, the 40-year-old businessman from Delafield, now a Republican, is running for the GOP Senate nomination against longtime state Sen. Leah Vukmir of Brookfield, who has a long history of passing conservative legislation. The winner will take on Sen. Tammy Baldwin in November.

Nicholson joined the race with no voting record, and his only political experience comes from his days at the University of Minnesota. Still, he has gathered a wealth of conservative donors and endorsements.

Nicholson’s insurgent Senate campaign in 2018 mirrors his unlikely bid for president of the College Democrats.

In July 1999, Nicholson became the first nonexecutive board member ever elected president of the College Democrats of America. Out of 600 votes, Nicholson won the race by 80, according to the Minnesota Daily in 2000.

His surprise victory brought attention, and later left him one board member’s vote shy of impeachment.

The impeachment charges alleged Nicholson had “abused” his power and violated the CDA constitution by bypassing the executive board’s opinions by:

“His election was pretty controversial because he was coming out of nowhere,” recalls Noah Schubert, communications director and executive board member for the College Democrats of America while he was a student at the University of California, Berkeley.

“He didn’t have a ton of past involvement in College Democrats. Not a lot of people knew who he was before he ran for president. So at the time, it was surprising that he won,” Schubert said.

Nicholson said in a statement that when he took office in 1999, the College Democrats had secretly run up tens of thousands of dollars of debt and failed to declare that debt to the Federal Election Commission. He moved to Washington, D.C., to “right the ship and temporarily stand in as staff went about raising money to repay the debt, and then hired new staff to take over.”

“In short, he was already acting like a conservative, and this frustrated other members of the board who’d been friends of the staff in question, and originally aligned to his opponent during recent elections,” his campaign said in a statement.

As a sophomore in the University of Minnesota’s College of Liberal Arts, he and his running mate, fellow sophomore Brook Anderson, were campaigning to be president and vice president of the Minnesota Student Association.

Nicholson had served as chairman for both the University Student Senate’s consultative committee and the Student Services Fees Committee. He was also active with metro-area college Democrats and the University DFL chapter (Minnesota Democratic-Farmer-Labor Party), according to past issues of the Minnesota Daily.

When asked about his campaign he said, “The best form of public relations is action.” 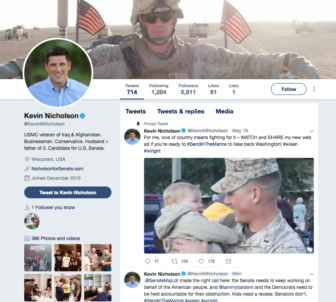 Kevin Nicholson is running for U.S. Senate as a Washington outsider and anti-politician who drifted from the Democratic Party. He emphasizes his experience as a Marine on his Twitter page.

Nicholson and Anderson narrowly lost the election by about 100 votes. After the loss, Nicholson sat on the back of one of the rooms on a couch, glaring into space.

“You couldn’t quote what I’m feeling,” Nicholson said to the Daily in May 1998.

But Nicholson would remain politically active. Just a few months later, in October 1998, the Milwaukee-area native was elected chairman of the College Democrats of Minnesota. Nicholson and his staff worked for months, raising money and building membership. In that time, the organization grew from 10 to 1,500 members.

“He always struck me as someone who is very strong in his beliefs … he wants to do what’s best,” Vicki Casey Larson, the adviser to the student fees committee, said to the Minnesota Daily about Nicholson. “He is aware that there are other opinions, and he seems to respect those opinions and points of view.”

Nicholson, the story reported, planned to graduate, attend law school and join the U.S. Marines in the pursuit of his biggest dream: president of the United States.

“Elected officials should never expect someone else to do anything they wouldn’t commit themselves to in a heartbeat,” Nicholson explained to the Daily.

In April 1999, Nicholson set his sights on a more attainable goal, to run for president of College Democrats of America.

He won a narrow victory that summer, but by winter he was facing the impeachment charges authored by executive board member Noah Schubert.

Schubert is now an attorney and partner at Schubert Jonckheer & Kolbe LLP in San Francisco and said in an interview that he has been out of politics for the past decade. (One of his legal partners gave $200 to Nevada Democratic Sen. Catherine Cortez Masto in 2017).

Schubert says he wrote out impeachment charges alleging Nicholson violated the CDA constitution by bypassing the executive board when making decisions.

“There were some concerns whether he really had the interests of the organization at heart or his own personal interests,” Schubert said. “As the year progressed, people became more and more concerned that Kevin was in this for his own glory, not interested in building up the organization.”

The Minnesota Daily reported the CDA was $90,000 in debt when Nicholson took over, and Nicholson had wanted a salary that would allow him to move to Washington and fix the organization’s financial issues, a break from protocol as the president usually stays at his or her university.

The executive board voted no to the idea.

Nicholson took the salary, which was authorized by the DNC and in his right, Schubert said. The event led board members to pursue impeachment against Nicholson.

At the time, Nicholson said the effort to impeach him was from executive board members who were upset their preferred candidates weren’t elected CDA president.

“They would’ve impeached me the day after the election if they thought they could’ve,” he said to the Minnesota Daily in the paper’s February 21, 2000, edition. “It’s politics, and it’s unfortunate, and it’s a waste of time.”

No way, says Alexandra Acker-Lyons, the College Democrats vice president when Nicholson led the group and now a Democratic consultant, and president of AL Advising.

“It was after months and months of him withholding information from us. Not being transparent with us,” Acker-Lyons said. “The impeachment was not political retribution. It was because of his actions.”

The impeachment charges were eventually dropped after a failed vote, Schubert said. The board needed a unanimous decision from all six members, excluding Nicholson.

In addition, the executive board was doused with emails opposing the impeachment and eventually dropped the effort, according to the Minnesota Daily.

Nicholson pressed on and would speak at the Democratic National Convention in 2000. He served as a Democratic delegate for his home state of Wisconsin that year and would even appear on an episode of MSNBC’s “Equal Time” representing the CDA.

Nicholson returned to Minnesota after his tumultuous term as president came to an end. After he graduated, he joined the Marines as planned and later earned degrees from Harvard and Dartmouth.

Now, years later, Nicholson is once again in the political spotlight — this time as a Republican.