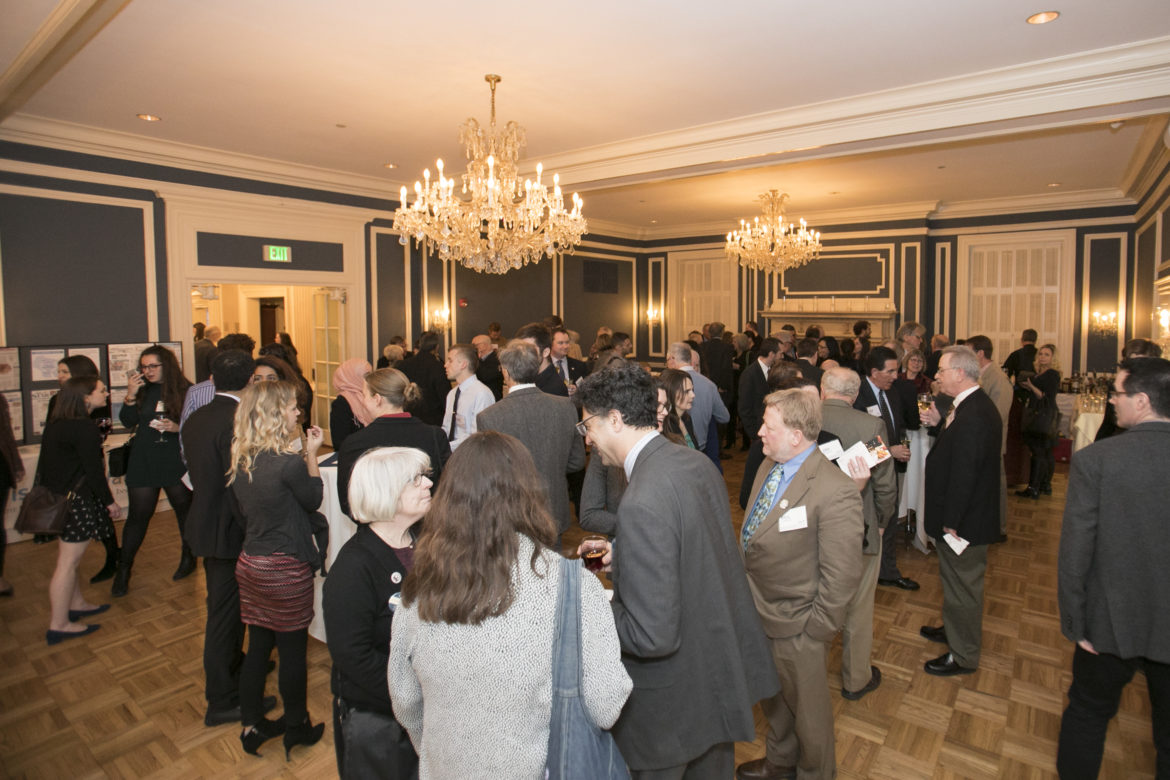 Attendees of the seventh annual Wisconsin Watchdog Awards mingle at the reception before the program begins.

Gov. Scott Walker, several journalists and a courageous private-sector employee are among those honored by the 2017-18 Openness Awards, or Opees, bestowed annually by the Wisconsin Freedom of Information Council. The state Legislature, meanwhile, is being singled out for negative recognition.

The awards, which are being announced today in advance of national Sunshine Week, March 11-17, recognize extraordinary achievement in the arena of open government. This is the 12th consecutive year that awards have been given.

“For more than a decade, the Opees have served to remind state residents that open government is a perpetual struggle, with heroes and villains,” said Bill Lueders, council president. “We need as many of the former as we can get.”

The winners will be invited to receive their awards at the eighth annual Wisconsin Watchdog Awards dinner in Madison on Thursday, April 19. The event is presented by the Wisconsin Center for Investigative Journalism, Wisconsin Freedom of Information Council and the Madison Pro Chapter of the Society of Professional Journalists.

Awards are being given this year in six categories. The winners are:

This resident of the village of Port Edwards in central Wisconsin spent more than 100 hours looking into alleged open meetings and ethics violations by the village board. His complaint to the Wood County district attorney led to the appointment of a special prosecutor and ultimately to a settlement requiring some officials to receive training on the state’s openness laws. Five of the board’s seven members either resigned or were voted out. Terry, who stepped down as Port Edwards’ village administrator in 2015 after 18 years, told USA Today Network-Wisconsin he felt obligated to act, saying the conduct he reported “reflects poorly on all government officials.”

It was a banner year for this Baraboo News Republic reporter covering public officials in Sauk County who seem allergic to open government. He exposed the intrigue behind one official’s departure and $135,000 contract buyout. He broke stories revealing that Sauk County Board leaders made false sworn statements and that the county’s former highway commissioner solicited NASCAR tickets from a contractor. His paper, based on his reporting, has filed a lawsuit seeking other information, as well as a complaint over a county committee’s failure to adequately provide notice of its discussion about an important personnel issue. Now he’s covering efforts by Sauk County officials to limit public comment at meetings.

Last March, for the second year in a row, Wisconsin’s governor issued an executive order ordering state agencies to improve their performance on open records requests. It directs them to track and post their record response times and limits how much they can charge. It also requires “regular training for all employees and members of all boards, councils, and commissions.” Walker’s efforts in this area, including his executive order in 2016, are much appreciated.

Both outlets pushed back against official secrecy to break major stories on sexual harassment. State Journal reporter Molly Beck reported on complaints against four lawmakers, including one that led to a $75,000 settlement, while colleague Nico Savidge exposed weaknesses in the UW-Madison’s reporting procedures and pulled back the veil on multiple accusations involving a particular professor. And UW-Milwaukee student journalists at Media Milwaukee unearthed dozens of allegations of harassment involving professors and other staff, shining a light on an overlooked issue.

Whistleblower of the Year (“Whoopee”): Will Kramer

At the heart of the Milwaukee Journal Sentinel’s remarkable series on the dangers posed by industrial barrel recycling plants was Will Kramer’s courageous refusal to keep his mouth shut while lives were at risk. The industry risk-management and safety consultant, who secretly  recorded one plant manager remarking that the drums “could blow up and kill eight people in a heartbeat,” went to the Journal Sentinel after government regulators failed to act. The paper’s resulting “Burned” investigation led to significant fines and safety improvements. Kramer has since left the industry to pursue a law degree.

No Friend of Openness (“Nopee”): The Wisconsin Legislature

The state’s highest legislative body is on record as being “committed to our state’s open record and open government laws and policies.” That’s often hard to tell. This year lawmakers from both parties denied requests for records of sexual harassment investigations and refused to provide electronic records in electronic form. The Republican majority also held secret meetings to hash out budget details, continued to conduct business by using abusive mail ballots and selectively blocked access to their social media accounts. With friends like these….