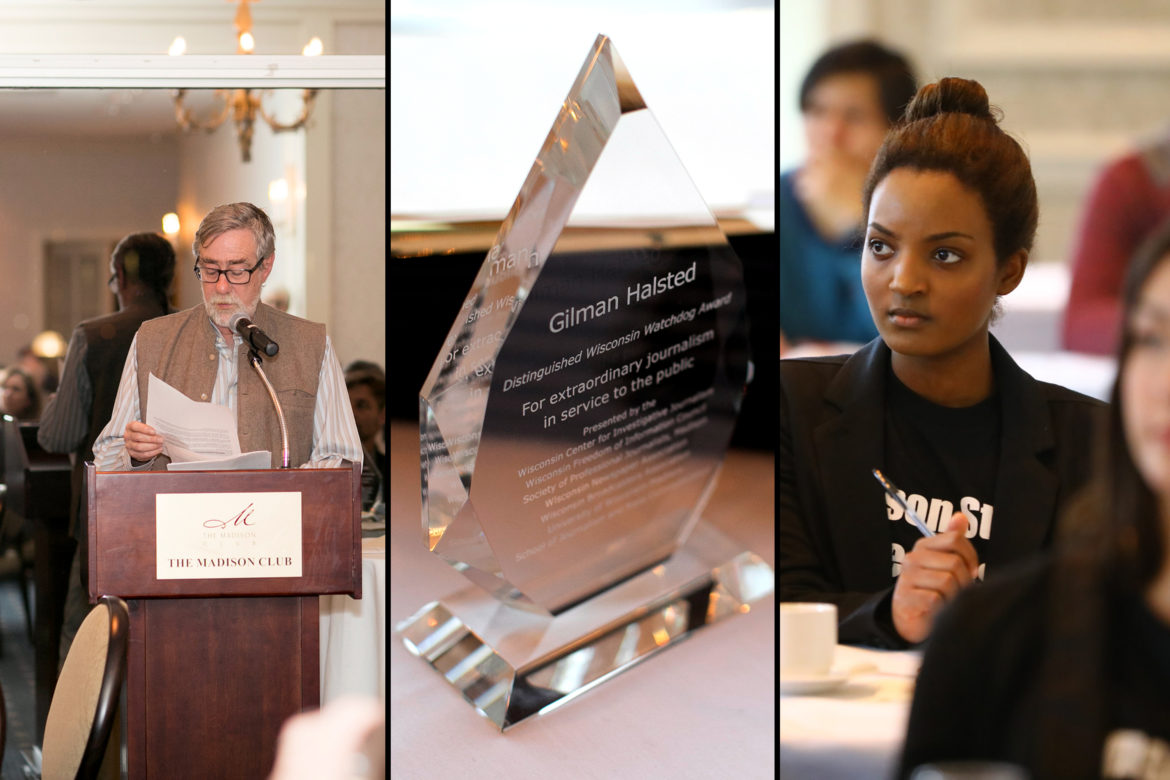 From left: Gilman Halsted receives the 2017 Distinguished Watchdog Award at a reception at the Madison Club; the award is given to an individual who provides extraordinary contributions to open government or investigative journalism in Wisconsin; students attend the Watchdog 101 Workshop prior to the awards ceremony.

Nominations are being sought for the eighth annual Distinguished Wisconsin Watchdog Award, recognizing an individual’s extraordinary contributions to open government or investigative journalism in Wisconsin.

The award is presented jointly by the Wisconsin Center for Investigative Journalism, the Wisconsin Freedom of Information Council, the Madison Pro Chapter of the Society of Professional Journalists, the Wisconsin Newspaper Association, Wisconsin Broadcasters Association and University of Madison-Wisconsin School of Journalism and Mass Communication.

Letters of nomination are accepted from journalists, news organizations and other individuals and organizations involved in open government and investigative journalism issues. Self-nominations are welcomed.

Nominations should summarize the individual’s extraordinary contributions to open government or investigative journalism in Wisconsin and provide examples of why those efforts matter. The award may recognize an individual’s achievements over an extended period of time, or within a single year, at the discretion of the selection committee. Nomination letters should be no more than two pages, single-spaced. Nominations may include a resume and/or a link to clips or a professional website for the nominee. Nominations that did not succeed in previous years are automatically in the running for this year.

Dave Zweifel, editor emeritus of The Capital Times and a founder of the Wisconsin Freedom of Information Council, was named the inaugural winner in 2011 and serves on the award selection committee. The late Dick Wheeler, founder of the Wheeler Report and an advocate for public access to the workings of state government, was honored in 2012. In 2013, U.S. District Judge Lynn Adelman, the chief author of Wisconsin’s Open Records Law and a strong advocate of the Open Meetings Law, received the award.

The recipient will be honored at the Wisconsin Watchdog Awards reception and dinner, scheduled for April 19 at The Madison Club, 5 E. Wilson St. The reception begins at 5 p.m. and dinner at 6 p.m.

Attendance is limited to 120 and in recent years, all tickets have been sold.

The awards program will be preceded by the third annual “Watchdog 101: Essential Skills for Investigative Journalists,” a free, fast-paced workshop led by the Center’s award-winning staff.

Sponsorship packages and discounts for purchases of tables are available for the event. Contact Lauren Fuhrmann at lfuhrmann@wisconsinwatchmediapartners.wpcomstaging.com for more information. Proceeds support the Center’s investigative reporting and training of journalists, and also make it possible for students to attend the workshop and awards program.