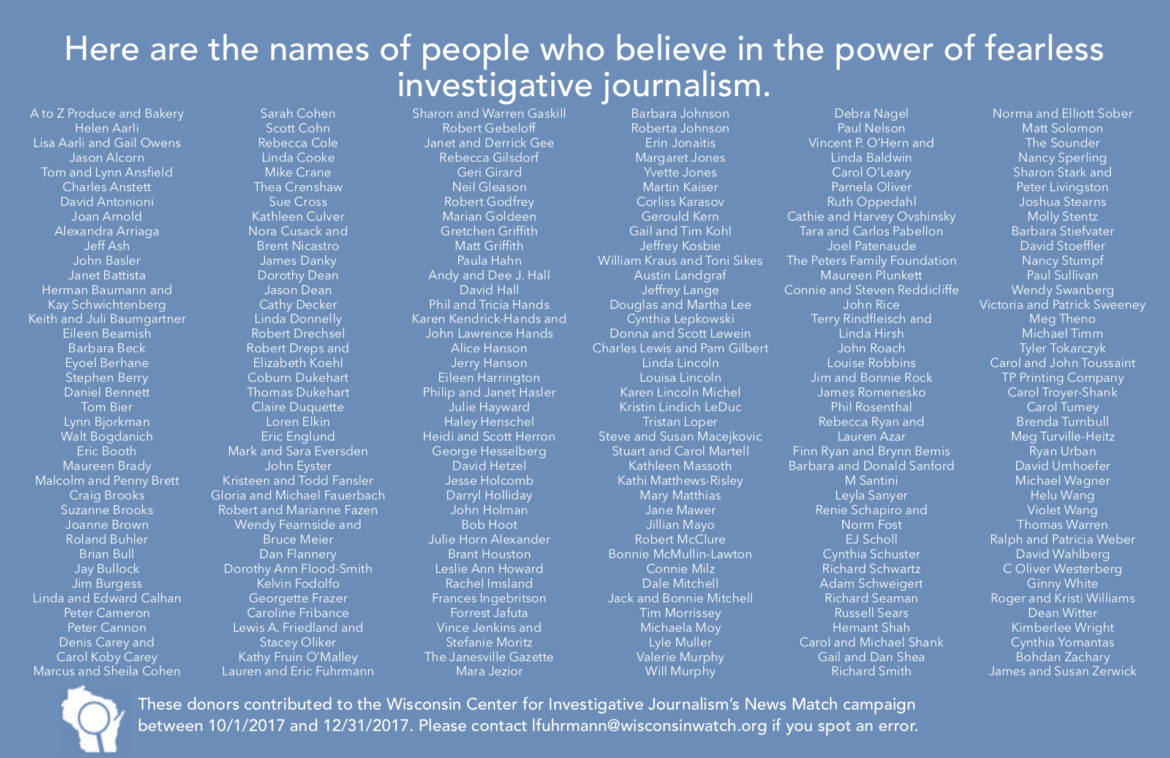 For the second straight year, donors provided gifts that qualified the Wisconsin Center for Investigative Journalism for full funding in the national News Match campaign for nonprofit newsrooms.

And once again, the Center attained a new fundraising record.

<a Members enjoy a full year of “behind the story” insights, events and benefits while building a legacy that will inform residents and strengthen our democracy for decades to come.

Those gains were attained through growth in the number of donors as well as the number of major gifts of $1,000 or more. The Center unveiled its Watchdog Club to recognize its largest and most loyal donors.

Watchdog Club membership grew from 38 to 50 during the final three months of the year and is expected to rise in 2018. To celebrate the successful launch, Watchdog Club members are being invited to a special Feb. 8 reception featuring Walt Bogdanich, a Pulitzer Prize-winning investigative journalist at The New York Times and a University of Wisconsin-Madison graduate. Additional events for club members will be held throughout the year.

Donations to the Center were matched, up to $1,000 apiece to the maximum limit of $28,000, by the News Match program, created by foundations to support more than 100 nonprofit news organizations that produce real news during this period of growing concern over fake and misleading information. The News Match campaign ran from Oct. 1 to Dec. 31.

“Keep doing what you do best,” one said. “Watching and reporting. Doing that deep dive that others do not do.”

“All of this is evidence that while many challenges remain, the Center is making progress in its efforts to raise its profile, build its own community and bolster its sustainability,” said Andy Hall, the Center’s co-founder and executive director.

Hall noted that the Center’s budget, which is about $500,000, increasingly relies on support from individuals and businesses to complement revenue from foundations, earned income and sponsorships.

Gifts came from people who had never donated before, dozens of people the Center’s staff has never met, long-time supporters, distinguished journalists, journalism staff and faculty, board and staff members, volunteers, relatives and friends — all united in support of the Center’s mission: “To increase the quality, quantity and understanding of investigative journalism to foster an informed citizenry and strengthen democracy.”

“We’re moved by the generosity of donors who reach deep into their own pockets to support our investigative reporting and the training of current and future investigative journalists,” Hall said.

“We couldn’t do this without everybody’s support,” Hall said.

The independent and nonpartisan Wisconsin Center for Investigative Journalism has four full-time employees, two part-time development consultants, several paid interns and skilled volunteers. Its investigative reports are shared for free on WisconsinWatch.org and through hundreds of other news organizations. The Center collaborates with Wisconsin Public Radio, Wisconsin Public Television, other news media and the UW-Madison School of Journalism and Mass Communication, where it is housed.

Funders exercise no control over the Center’s editorial decisions. All are publicly identified as a matter of policy to protect the integrity of the Center’s journalism.