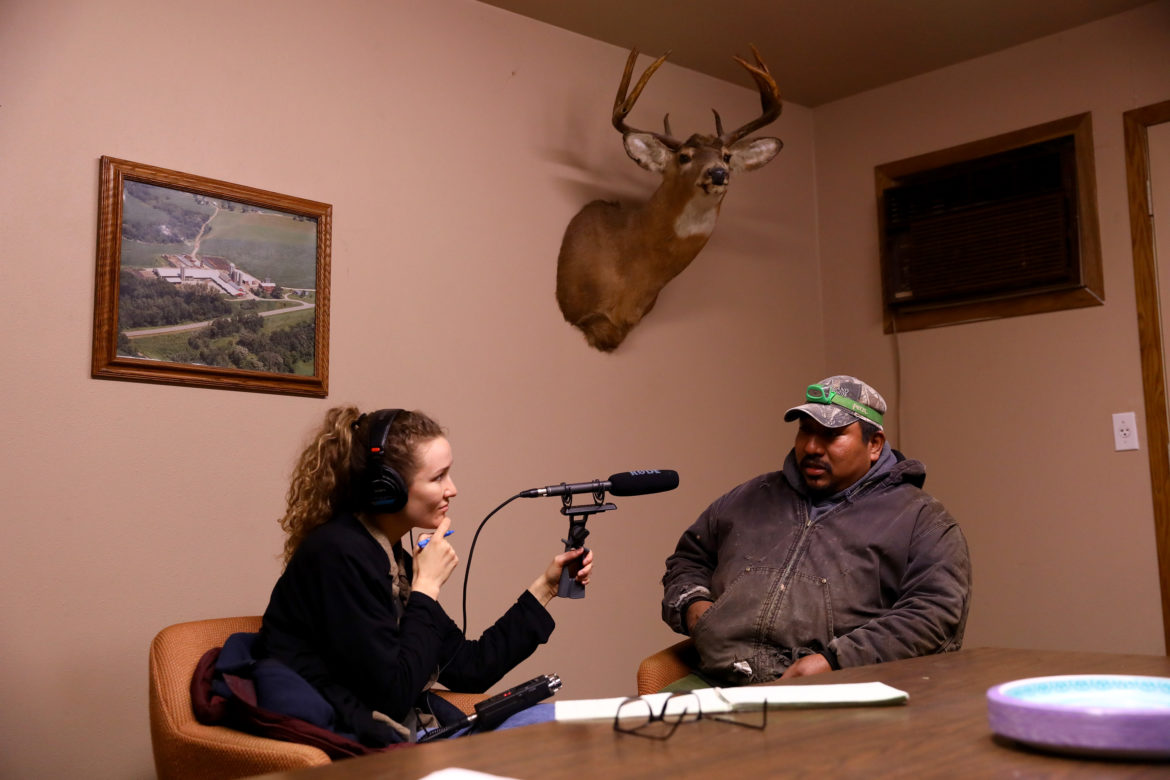 Alexandra Hall interviews Guillermo Ramos at a dairy farm in northern Buffalo County, Wisconsin. Ramos, who is from Mexico, has worked there for 17 years. Hall is a reporter for WPR and the Wisconsin Center for Investigative Journalism which co-produced a documentary with Twelve Letter Films. The film, "Los Lecheros" (Dairy Farmers), explores the use of immigrant labor on dairy farms.

More on this topic from WCIJ

The Wisconsin Center for Investigative Journalism and Twelve Letter Films are proud to announce that their first documentary, “Los Lecheros” (Dairy Farmers), which explores rising tensions over undocumented dairy workers since the election of President Trump, has been accepted to two prestigious film festivals.

The 21-minute documentary will premiere at the Meet the Press Film Festival in Collaboration with the American Film Institute on Nov. 13, in Washington, D.C. The film is one of 16 short political documentaries to be featured in the inaugural festival, and will include a question and answer session with Twelve Letter Films’ director Jim Cricchi following the screening.

“Los Lecheros” also has been selected for inclusion in DOC NYC, the nation’s largest documentary film festival. It will screen in New York City on Nov. 16.

The idea for the documentary began when Cricchi approached the Center in April after reading a story by Wisconsin Public Radio and Center reporter Alexandra Hall on fears that Wisconsin dairy farmers and their undocumented immigrant workers shared because of the Trump administration’s vow to deport anyone in the country illegally. Immigrants make up a majority of the workforce on Wisconsin dairy farms, and many farmers say that deporting workers could harm Wisconsin’s signature industry. 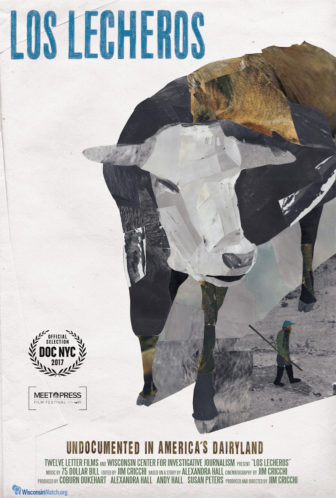 "Los Lecheros"will premiere at the Meet the Press Film Festival in Collaboration with the American Film Institute on Nov. 13, in Washington, D.C., and the DOCNYC festival in New York City on Nov. 16.

“I have been following WCIJ’s work for years and in particular their stories on water and environmental issues,” Cricchi said. “When I came across Alexandra Hall’s story about immigrant dairy farm workers, I was intrigued by the idea of making a short documentary around her strong reporting and the compelling individuals profiled in the article.”

Cricchi brought his camera to western Wisconsin, and along with Hall and Center photographer Coburn Dukehart, documented an immigrant family preparing to leave after working 16 years on a dairy farm. Miguel Hernandez and his wife Luisa Tepole took their two American-born sons back to their hometown in Mexico as fear of an immigration crackdown created uncertainty in their lives.

The film also features Guillermo Ramos, who manages a 1,000-cow farm. He plans to stay despite the threats of possible deportation. In addition, Cricchi profiled Buffalo County farmer John Rosenow, who has advocated publicly for immigration reform, saying that immigrants are critical to the state’s $43 billion-a-year dairy industry. 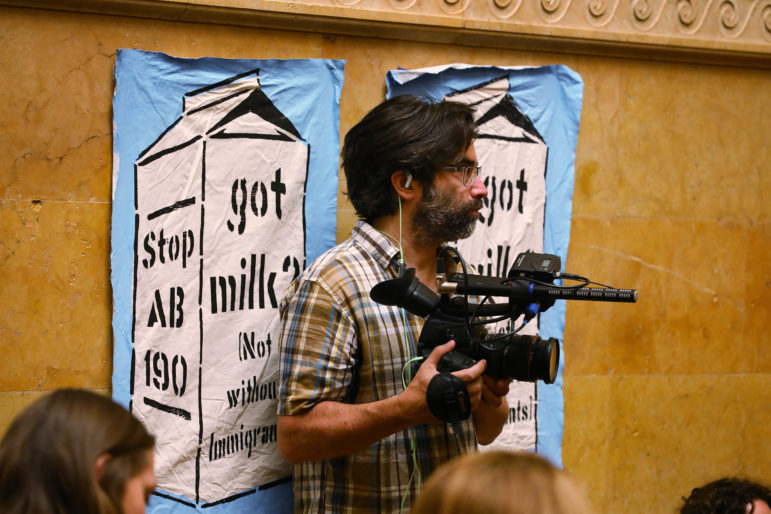 Filmmaker Jim Cricchi covers a people's hearing against Assembly Bill 190 at the Wisconsin State Capitol in Madison, Wis., on Sept. 27. AB190 would prohibit cities and towns in Wisconsin from enacting rules prohibiting the enforcement of federal or state laws related to illegal aliens and immigration status.

“Bravo to Jim Cricchi and my WCIJ and WPR colleagues for their skillful reporting and storytelling,” Andy Hall said. “We hope this film provides the public and policymakers with insights into the effects of immigration policies and economic forces on immigrants and citizens, including employers.” 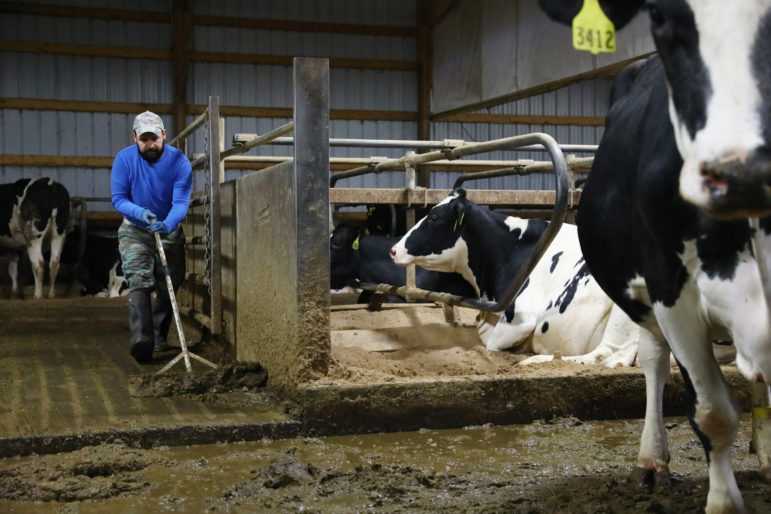 Miguel Hernandez cleans a barn on his last day of work on a Pepin County dairy farm on May 31. He was leaving for Mexico with four other dairy workers the following day. Hernandez is featured in the documentary "Los Lecheros" produced by Twelve Letter Films and the Wisconsin Center for Investigative Journalism.

Alexandra Hall’s interviews with many of the Spanish-speaking subjects, originally recorded for WPR, were used throughout the film.

“Working with Jim was an amazing experience,” she said. “His interest in this issue and in the people we met, plus his devotion to the film, elevated the quality and depth of our reporting. I’m very happy that he approached us and that together, we could bring this story to a larger audience.”

This is the first film produced by the Center, and the first documentary film directed by Cricchi, who has been an editor for 20 years working on documentaries, feature films, television and short films for outlets including Vice on HBO and The New York Times. Twelve Letter Films is a joint venture with Susan Peters, who has worked in nonprofit management and development, with a particular focus on the Middle East and North Africa. Peters is a member of the Peters Family Foundation, which donates money to the Center. 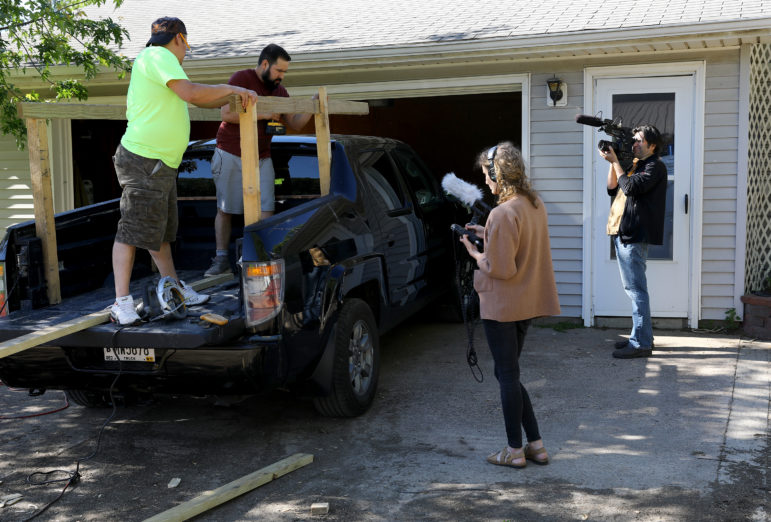 Alexandra Hall and Jim Cricchi document Miguel Hernandez and Pedro Tepole as they build a structure in the back of a pickup truck to help carry their belongings from a Wisconsin dairy farm back to Mexico. Hernandez is featured in the documentary "Los Lecheros."

“The WCIJ team’s research, great writing and their relationships in the field were the backbone of this film,” Cricchi said. “Collaborating with them provided a good opportunity for me to make a film around a topic I care about, and it turned out that it was a good opportunity for WCIJ to do its first documentary film collaboration.”

Added Cricchi: “I hope that viewers of ‘Los Lecheros’ come away with a better understanding of the dairy industry’s dependency on immigrant workers, the flaws in the current U.S. visa system and the effects of current legislation on people’s lives, families and local economies. But in particular, I hope that viewers feel the warmth and personal integrity of John, Miguel, Luisa and Guillermo whom I came to know through this project.”

Coburn Dukehart is the digital and multimedia director for the Center. Her role includes directing its visual strategy, creating visual and audio content, managing digital assets and training student and professional journalists. Dukehart has a master's degree in photojournalism from the University of Missouri, and has previously worked as a senior photo editor at National Geographic and NPR. Her multimedia work has been honored with a Webby, a Gracie, a Murrow and duPont awards, and she was nominated for a national Emmy. She specializes in documentary storytelling and visual reporting, and is a member of the National Press Photographers Association and Investigative Reporters and Editors. She is based in Madison, Wisconsin. She can be reached at cdukehart@wisconsinwatchmediapartners.wpcomstaging.com