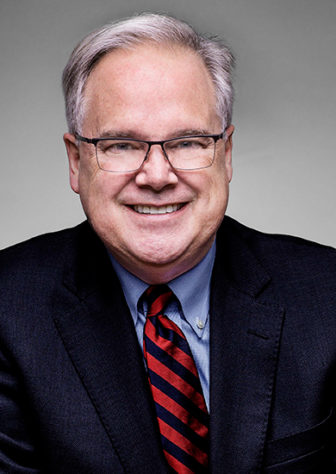 Ralph A. Weber, a founding member of Gass Weber Mullins in Milwaukee, a national trial litigation law firm, has been elected to the board of directors of the nonprofit and nonpartisan Wisconsin Center for Investigative Journalism.

Weber has founded and worked with several educational, charitable and nonprofit groups, including the Marquette University National Alumni Board, the Board of the Wisconsin Conservatory of Music, the Marquette University College of Arts & Sciences Alumni Board, and the FC Milwaukee Soccer Club. He serves as a member of the Northwestern Mutual Board of Trustees and the National Board for Rocketship Education, a San Jose-based network of public elementary charter schools serving primarily low-income students.

“Ralph has a distinguished background and many skills that he brings to the WCIJ board, but I am particularly impressed by his impassioned regard for journalism, and investigative reporting in particular,” said Karen Lincoln Michel, president of the 10-member WCIJ board and editor of Madison Magazine. “I’m delighted that he’s part of our team and we are eager to work with him.”

Gass Weber Mullins has been recognized by the National Law Journal on its national “Hot List” of boutique firms. Weber is a member of the American College of Trial Lawyers, and Chambers Guide-USA identifies him as a top commercial litigator. The Wisconsin Law Journal honored Weber in 2014 as a “Leader in the Law.” His appellate experience includes multiple oral arguments before the Wisconsin Supreme Court and intermediate appellate courts.

“I am grateful for the opportunity to support the Center’s critical mission,” Weber said. “Investigative journalists devote their lives to revealing the truth. We must make sure they continue their work.”

A nationally acclaimed board of directors, including experts in investigative journalism, nonprofit journalism and nonprofit financial management, determines the Center’s policies, while day-to-day operations are handled by the staff.

The award-winning Wisconsin Center for Investigative Journalism (WisconsinWatch.org) increases the quality and quantity of investigative reporting in the state, fostering an informed citizenry and strengthening our democracy, while training current and future generations of investigative journalists.

The Center, a 501(c)(3) charitable organization, launched in 2009. It collaborates with, but is independent of, the University of Wisconsin-Madison School of Journalism & Mass Communication, where it is housed; Wisconsin Public Radio; Wisconsin Public Television; and news organizations across the nation.

The Center’s four-member professional staff supervises and trains paid interns and fellows who serve as investigative reporters and public engagement and marketing specialists. The Center also trains high school, college and professional journalists. The Center’s stories are distributed free of charge for use by news outlets in Wisconsin and beyond. The Center has produced more than 300 major reports that have been published, broadcast or cited by more than 600 news outlets. The estimated total audience for its work exceeds 61 million people.