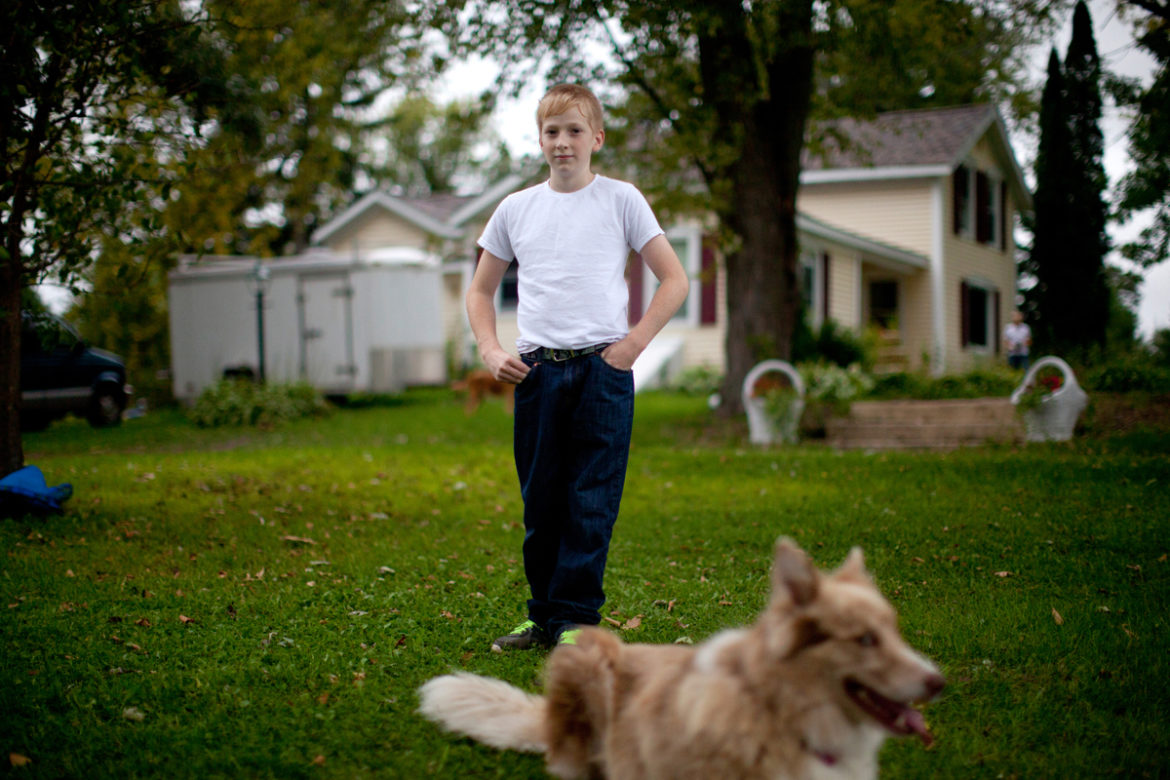 Jacob Reeves, pictured at home in Stoughton, was diagnosed in 2014 with juvenile dermatomyositis — a rare disease that his mother Dawn attributes to the high level of atrazine found in their well water. "I only cried once," Dawn Reeves said, "when they said he might not walk again." Jacob's story was featured in the "Failure in the Faucet" series which won an award from SPJ for investigative reporting among small, online independent news organizations.

The Society of Professional Journalists on Monday named the Wisconsin Center for Investigative Journalism’s “Failure at the Faucet” series a first-place winner in its national contest.

The series took top honors in the 2016 Sigma Delta Chi Awards for investigative reporting among small, online independent news organizations. “Failure at the Faucet” was one of 85 honorees among more than the 1,300 entries. The ongoing project is the most detailed journalistic look at risks to drinking water in Wisconsin, including lead, arsenic, strontium, radium, bacteria and pesticides.

“This award is a testament to the stellar work of the Center’s staff and the inspiring leadership of Andy and Dee Hall, who have built the Center into one of the top investigative nonprofit newsrooms in the country,” said Brant Houston, Knight Chair in Investigative and Enterprise Reporting at the University of Illinois at Urbana-Champaign and president of the Center’s board of directors. 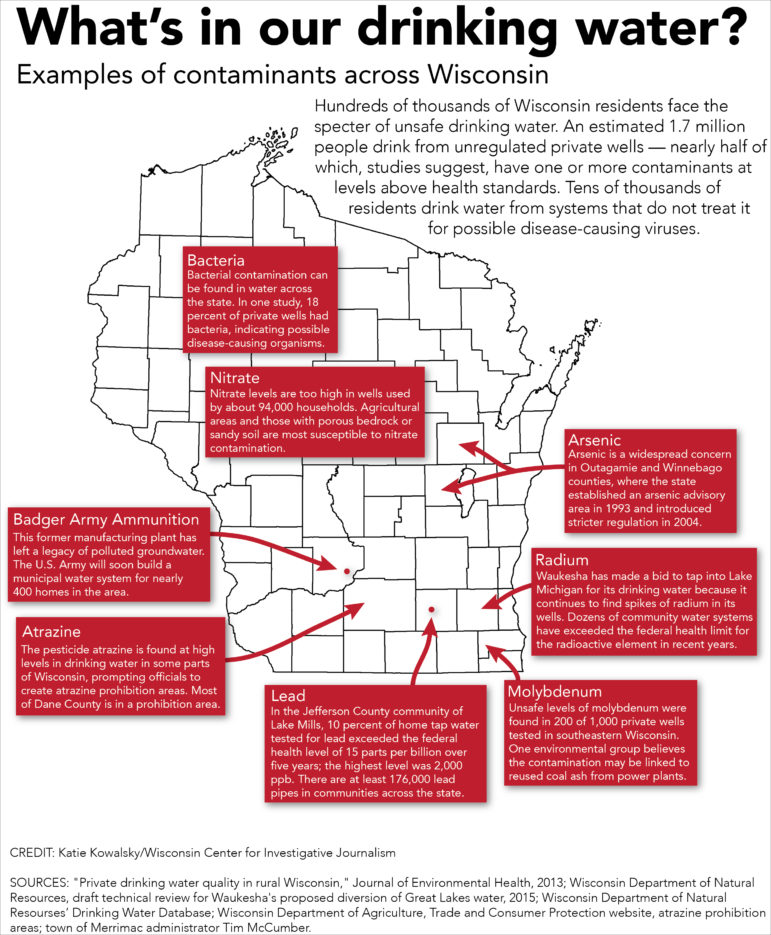 Reporting for the series began in 2015 as part of The Confluence, an experimental news project of the Center and the University of Wisconsin-Madison School of Journalism and Mass Communication. It is an example of in the UW’s vaunted Wisconsin Idea in action.

“We feel a deep sense of gratitude to the dozens of Wisconsin residents who shared their struggles with us to expose failures of regulatory systems that led to the contamination of drinking water in communities across the state,” said Andy Hall, the Center’s executive director and co-founder with Managing Editor Dee J. Hall.

“We appreciate SPJ’s national recognition of this project, which included generous support from funders and remarkable collaborative work by the Center’s staff, paid interns, volunteers, UW-Madison journalism students and faculty, Wisconsin Public Radio, Wisconsin Public Television and others. They brought the problems to light through stories, photos, maps and data analyses, raising public awareness and fostering a search for solutions.”

“Failure at the Faucet” has been named one of Wisconsin’s top investigative projects two years in a row by the Milwaukee Press Club. 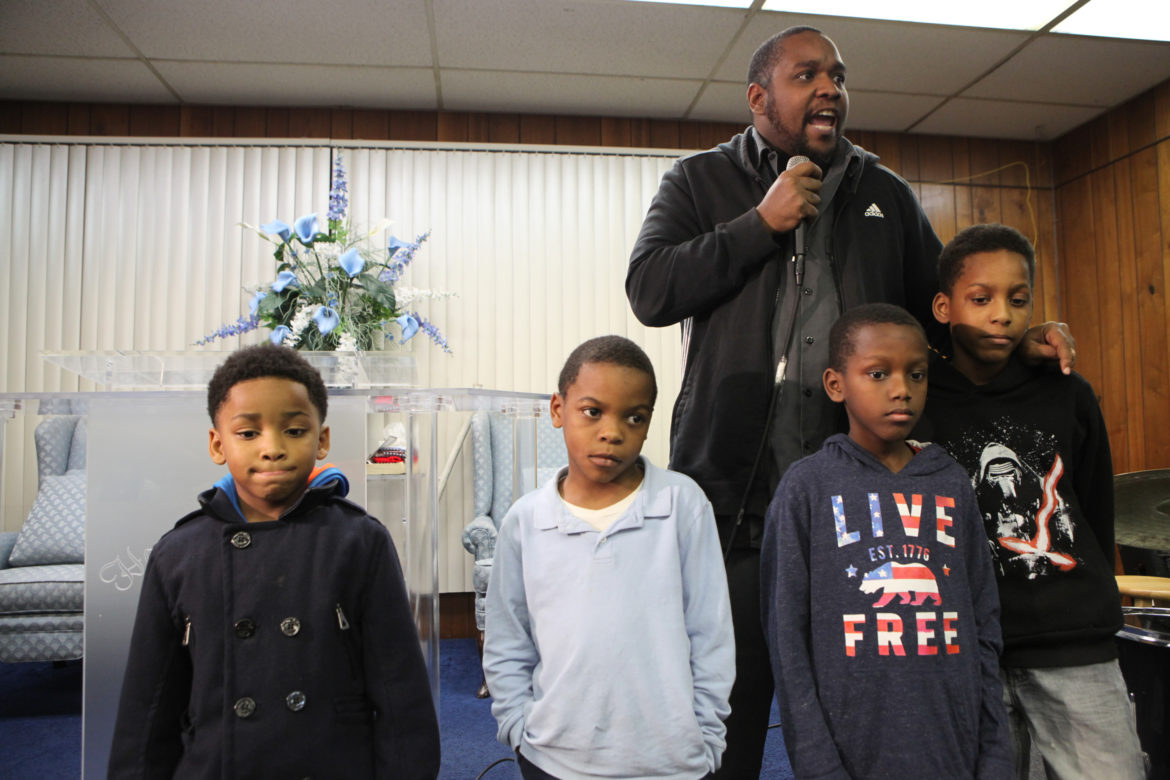 Tory Lowe helped to organize a meeting about lead in drinking water at the House of Prayer in Milwaukee on Dec. 6. He asked the young boys in the audience to join him at the front of the room to challenge everyone to protect them from the dangers of lead in drinking water. The children, from left, are Tomairus Brown, 5, Diamante Silas, 7, Jakoda Eiland, 8, and Jeriko Eiland, 11.

In early 2016, the Center was the first to report on the dangers posed by Wisconsin’s 176,000 lead service lines and the state’s high childhood lead poisoning rate, which rivals that of Flint, Michigan.

Throughout 2016, the Center continued its coverage of the risk of lead in state drinking water, including high levels at two state prisons. Stories revealed that the state Department of Natural Resources had failed to update its testing guidelines to avoid techniques that can mask the true level of lead in drinking water, and the lax federal standards that expose children at school and day care to this dangerous neurotoxin.

The Center highlighted the problem of the ancient poison, arsenic, which is tainting private water wells across the state, especially in northeastern Wisconsin. Reporters discovered that strontium, a natural contaminant under review for possible regulation by the U.S. Environmental Protection Agency, is found in some of the highest concentrations here in Wisconsin.

Chuck Wagner's granddaughters, Mackayla, left, and Maggie DeBaker, pose with polluted well water from his Kewaunee County, Wisconsin, home around 2010. In 2013, Wagner had a new, deeper well drilled at a cost of $10,000. The new well has also become polluted with viruses from cattle manure, and he now uses a reverse osmosis system to filter the water before drinking or cooking.

The series also probed the root cause of the controversial plan by Waukesha to tap into Lake Michigan — radium, a natural contaminant in water across eastern Wisconsin.

As part of the series, the Center alerted the public to the dangerous problem of bacteria in drinking water, caused both by animal and human waste.

And stories showed the widespread presence of pesticides in rural drinking water and the state’s success at reducing atrazine, one of the most pervasive agricultural chemicals. The series included a piece showing how water quality and quantity had emerged as key issues in some political races in Wisconsin. 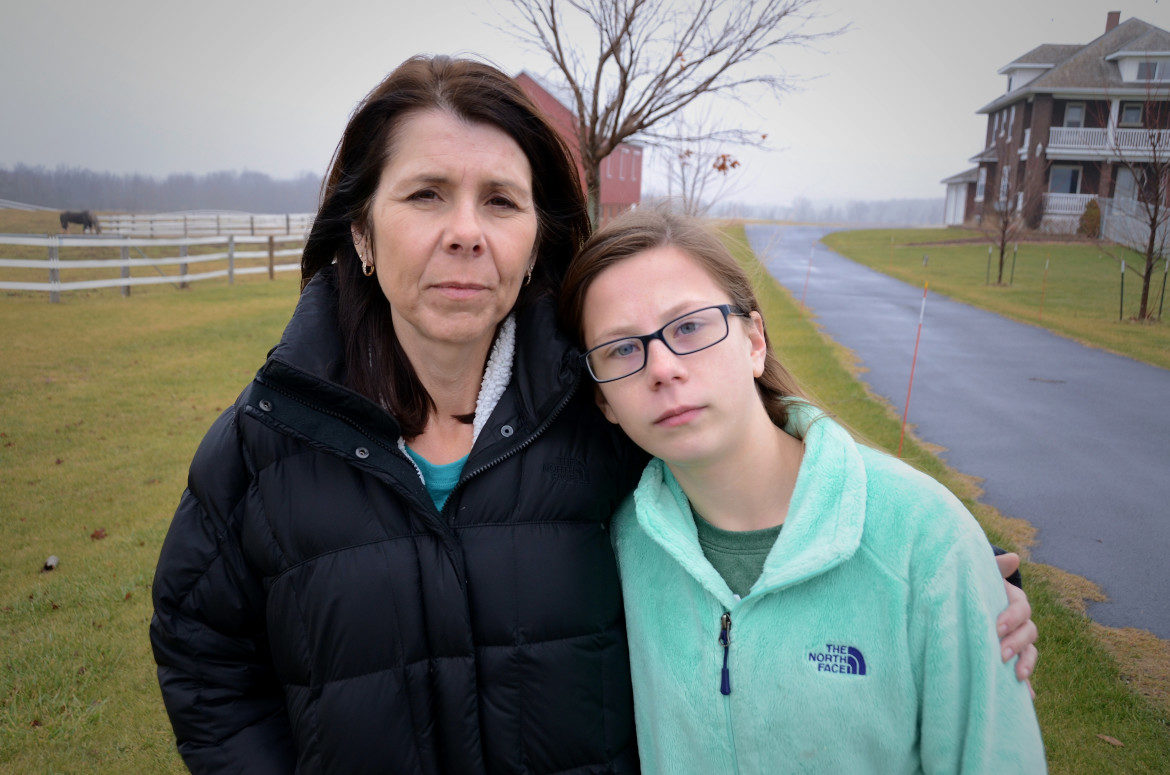 The Center's staff, along with UW-Madison's J475 students, won an award for "Best Investigative Story or Series" for the "Failure at the Faucet" series, which revealed numerous threats to drinking water quality in Wisconsin, including lead, arsenic, radium, strontium, human and animal bacteria and viruses and pesticides. Pictured here is Judy Treml and her daughter Samantha Treml, who fell ill when she was six-months old after being bathed in well water tainted by manure spread on a nearby frozen farm field.

The series sparked action by state and local officials, including a new program by the state Department of Natural Resources to help communities replace lead service lines; a bill that would require water to be tested when a child is lead poisoned; a Republican proposal to make it easier to replace lead service lines; acknowledgement by state and local officials that current efforts fall short of protecting the public from lead; and a budget proposal by Gov. Scott Walker that boosts the childhood lead program.

“In a time when the news media’s credibility is under political attack, the Center’s work is a shining example of how important investigative journalism is in helping to bring about changes to benefit society — and in this case, ways to ensure Wisconsin residents have access to clean drinking water,” said Madison Magazine Editor Karen Lincoln Michel, vice president of the Center’s board of directors.

The following reporters, editors, photographers, multimedia producers and journalism professors have contributed to the “Failure at the Faucet” series:

Lallensack will accept the award on behalf of the Center at the Society of Professional Journalists’ SDX award ceremony June 23 at the National Press Club in Washington, D.C. SPJ has 8,000 members including broadcast, print and online journalists, journalism educators and students. The organization is “dedicated to the perpetuation of a free press as the cornerstone of our nation and our liberty.”